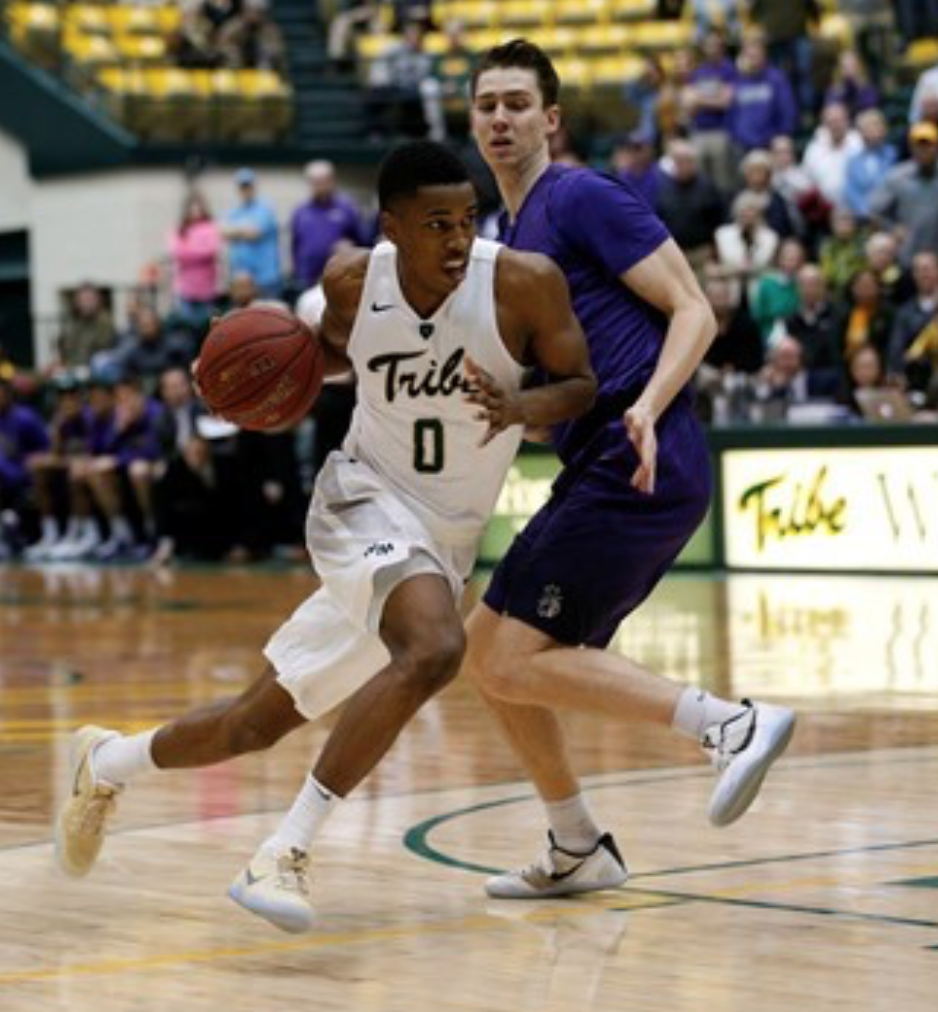 Though the Tigers scored the first points of the game on a jumper from Deshaun Morman, the College quickly recovered, tying the game up 2-2 with a layup by Prewitt off a pass from Dixon. From here, the Tribe didn’t look back, as Towson trailed for the remaining 38 minutes of the contest.

Malinowski shot a good three-pointer off an assist by Schlotman, while Knight executed three crowd-rousing dunks in the first half.

“I was really hesitant to score [at the beginning of the year], more looking to pass, looking for Daniel and Omar,” Knight said. “Now they’re giving me the confidence to get inside and score the points, and I was doing that today.”

The Tribe stormed out of the gate, pouring on points in waves. The largest lead of the half was 19, which came at the seven-minute mark after two free throws from Malinowski. The College was up 31-12 at the time. The Tigers began to creep back into the contest, settling into the game and executing well. However, a Knight layup off a Dixon assist with 14 seconds remaining ended the first half strong for the College, which led 42-33 at intermission. In a hot-shooting first half, the College was shooting 52 percent overall.

Knight scored the first points of the second half with a layup off a Prewitt assist. The freshman had an all-around strong performance. In addition to five crowd-igniting dunks, Knight’s 20-point game broke his previous career high of 15.

The College’s biggest lead of the game came with 11 minutes, 30 seconds remaining, when Towson was down 69-47, a 22-point deficit.

Despite the advantage, the Tribe struggled to finish and maintain the margin. The Tigers went on a 10-0 run, stopped only by a free throw from junior guard David Cohn and followed by a 6-0 Towson push. With less than five minutes left in the game, the College’s lead was down to just four.

I don’t consider [Knight] a freshman anymore, and I definitely don’t treat him like a freshman.”

Free throw shots by Dixon, Prewitt and Cohn saved the Tribe from being overtaken by Towson in the waning minutes. A Knight dunk off a Prewitt assist with just under three minutes left was the last basket for the College.

With 13 seconds left, the Tribe led 81-79 with Dixon on the foul line for two free throws. The senior once again came up clutch for the Tribe, burying both attempts to push it to a two-possession lead.

“Daniel was special today, he’s had a great year, an incredible year,” Shaver said. “Omar didn’t have a great day offensively, but he had … a beautiful pass to Daniel on a big play at the finish right there … he found a way to help us win the ball game.”

Dixon led Tribe scoring with 32 points, followed by Knight with 20 and Malinowski with 10. Schlotman contributed an assist, two steals and a good rebound in his six minutes on the court on senior day.

“It’s nice to see our seniors really make a mark today,” Head coach Tony Shaver said. “First of all, I thought Michael Schlotman was so good at the beginning of the ball game, it almost brings tears to your eyes.”

Dixon led the Tribe with five assists, closely trailed by Prewitt with four. Schlotman led with two of the College’s six steals.

The College finished the game shooting a strong 51 percent overall. Dixon led in foul shots, making 17 of his 18 attempts.

“I think we’re a confident bunch,” Dixon said. “I think we’ve proven that we can beat every single team, but any team could beat us as well.”

The Tribe will head to Charleston on Saturday to take on Elon at 2:30 p.m. in the first round of the CAA Tournament.

I think we’ve proven that we can beat every single team, but any team could beat us as well.”