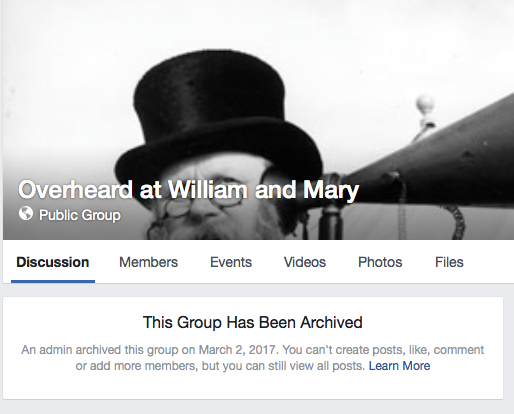 I hope everyone had a relaxing spring break! I’m here to remind you just how ridiculous things got the week before the break because I’m assuming it’s probably been placed on the back burner for most people.

Overheard is officially dead. Yes, it’s true. The classic William and Mary Overheard page is now archived on Facebook as of March 2, 2017.

Overheard is officially dead. Yes, it’s true. The classic William and Mary Overheard page is now archived on Facebook as of March 2, 2017. No one can like, post, share or comment anything in the group, but all previous content is still viewable. Within the several minutes after the archive of the group, three to four knock-off versions cropped up almost immediately claiming to be the next “real” Overheard.

The debacle started with a post from member Megan Sonner, in all caps, demanding an overhaul of the current administrators of the page, a vote of what should be allowed in the group, and “collective affirmation that we will not tolerate bigotry.” The “we” Sonner is referring to in the situation is unclear, and was left unidentified, even in the comments. Shortly after Sonner’s post, another member, Michael Darr, posted a 30-minute response video of himself eating Sonner’s rant shirtless, in a minion hat, with Enya playing in the background. To say that things spiraled out of control from this point would be an understatement.

There were mixed reactions to Darr’s video. Many people thought it was a hilarious and outrageous repartee to Sonner’s post, and others found it childish and offensive. The comment section of the video absolutely blew up with various arguments, comments expressing confusion and relevant memes.

Overheard has turned into more of a politically-charged announcement page than its original purpose: to post funny or shocking comments overheard around campus.

Regardless of whether you agree with either Sonner or Darr, I think we can all agree that Overheard has turned into more of a politically-charged announcement page than its original purpose: to post funny or shocking comments overheard around campus. In light of recent elections, it’s important to have continual discourse and conversation about social, economic and political issues, but Overheard should not be the place.

Yes, it’s important to hold people accountable for what they post and comment, especially if it’s bigoted or extremely offensive, but censorship only leads to larger divides between groups and much more hostility and ignorance. The importance of civil discourse is at an all-time high, and with the immediate availability and anonymity of social media, things can get very heated with seemingly no consequences. But there are consequences, and they include anxiety, resentment, radicalization and even fear. To scream at and degrade each other on the internet is in no way helpful, coming from any point of view, and it only leads to bitterness and increased stubbornness on all sides.

The Constitution protects free speech, and there have been several cases to try and outlaw hate speech, but none have passed, all being deemed unconstitutional. To censor hate speech and to condemn or hold people accountable for it are two very different things. One’s freedom of speech is not infringed upon if someone calls you out for your bigotry or ignorance, but it is infringed upon if the law censors you. So if a Facebook group bans you because you’re posting racist comments, your freedom of speech is not infringed upon, because you are not being persecuted by the government; people in the group just don’t want to hear your malarkey anymore, and that’s perfectly legal.

In the light of the newly created Overheard pages, we should all recognize that the groups’ purposes do not include providing a place for politically charged arguments and debate.

In the light of the newly created Overheard pages, we should all recognize that the groups’ purposes do not include providing a place for politically charged arguments and debate. Maybe there should be a separate group specifically for that purpose. These pages are simply for funny or silly remarks that have been overheard around campus. If you want to post about the political or social climate on campus, do it on your own time, because Overheard is not a soapbox — it’s a place to laugh and cooperate. But don’t be afraid to politely hold people accountable, because that is where growth and collaboration start.