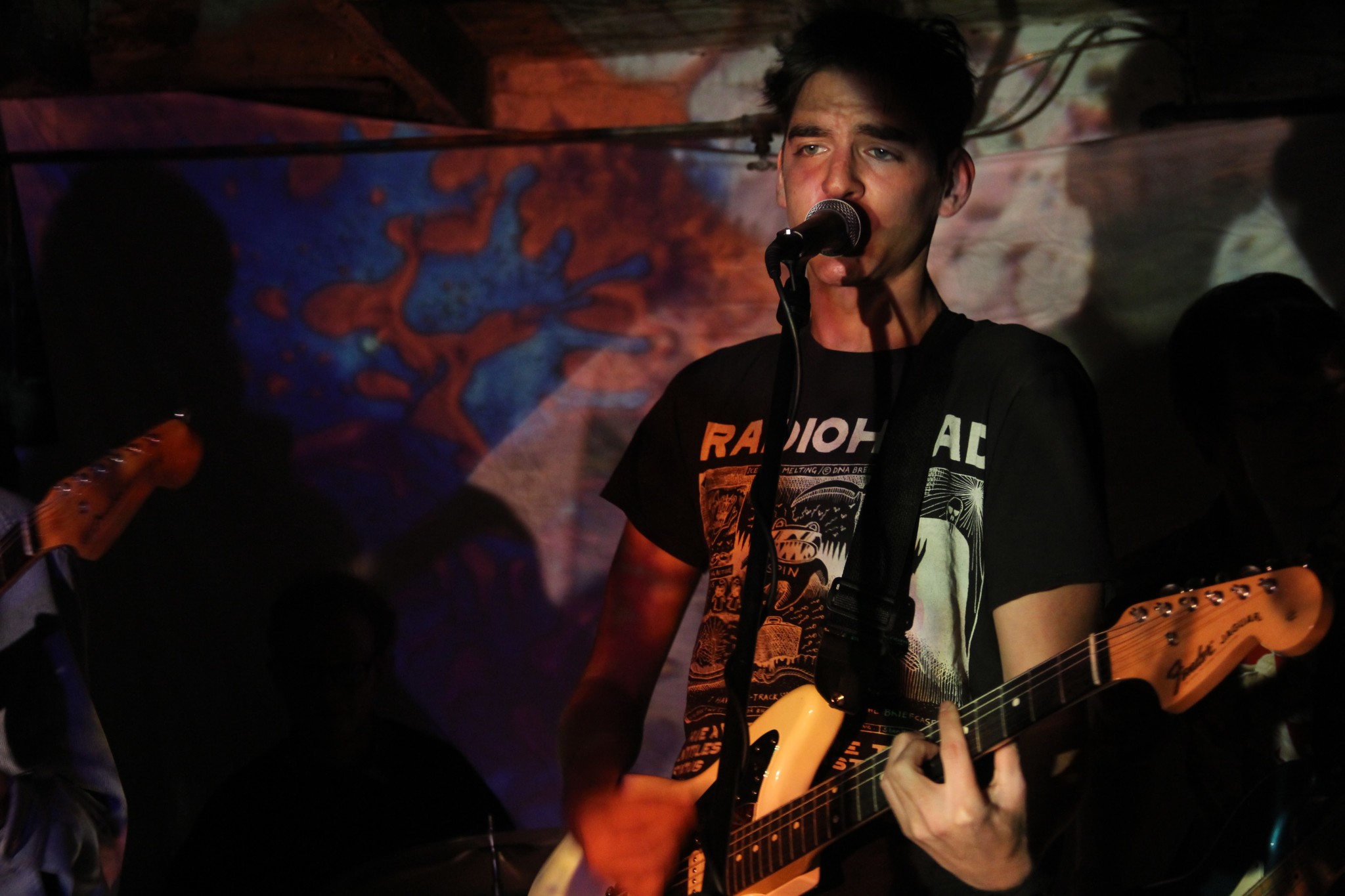 Early Sunday afternoon, as students slowly began arriving on campus, eight young musicians sat around a small table in a Ludwell Apartment sipping coffee to cure the exhaustion created by 10 days and 1,500 miles worth of travel.

Before winter break, Chase and his bandmates began discussing a potential tour. According to Chase, the band wanted to push themselves further and try and play something over spring break.

“None of us had plans for spring break, and then we very quickly united with Swete Dreams because they wanted to do the same thing, and it turned into a mothership,” Chase said.

Both bands began to reach out to friends and contacts they had in different music scenes along the East Coast to begin organizing shows. As is the case for most young bands, booking venues was difficult at times.

“The process of this is you say like, ‘I want to play Philly on this dates or these couple dates,’ and end up sending out, it might be 20 emails and text messages and Facebook messages and you might here back from like two or three and then one might work out,” Chase said. “That’s totally like the process of it, you just got to keep rolling through the rejections.”

The bands booked a total of 10 shows in 10 different cities and drove between 1,000 and 1,500 miles. They traveled as far as Providence, R.I. to play at Brown University.

“That Brown show was crazy because we had played the night before in New Jersey at Rutgers and stayed at Samir’s house, but then we drove all the way up to Providence, Rhode Island from there and then played a show, woke up at 6:30 a.m. the next morning and drove 555 miles down to Charlottesville to play our final show,” Fox said.

The tour kicked off Thursday, March 2 at the Meridian Coffee House in Williamsburg, a student run coffee house at the College. From there, the bands traveled north and played at different houses and venues.

One of Ramos’s favorite venues was the Whytestone Creative in College Park, Md.

“We walked up to this place and the guy was wearing a fur coat and a red beret, which I didn’t think anything of at the moment because I was like , ‘Alright, yeah we’re hanging out with esoteric dudes,’ whatever, and then we walked around the back and opened the door, which smoke promptly billowed out of, and everybody inside was also wearing fur coats and red berets,” Ramos said. “It was like, ‘Oh that’s what we’re doing.’ There were also a bunch of beds set up around the floor. It was spooky.”

The venue also channeled the energy of Burning Man by shooting up giant flames in gasoline contraptions behind the buildings, an activity reminiscent of the famous festival Burning Man.

“All of them lived and died by Burning Man,” Vutcharangkul said.

The bands also played at a venue called The Meatlocker in Montclair, N.J. True to its namesake, the building was previously used for storing meat until the ‘80s when it was converted into a practice space.

Chase enjoyed playing in his hometown of Westminster, Md., where he was reunited with friends, family and his old high school band. He added that one of his favorite parts of the tour was getting to know the family members of his bandmates and fellow tourmates.

“My favorite part was getting to meet all of our families, some of which it was the first time, and getting to stay in some of each others houses and just like becoming closer to all of each other,” Chase said.

The tour, like many long road trips, was filled with both adventure and misadventure. A bubble tea shop ran out of bubbles. Wiles and Tawalare dug through the snow with their bare hands to look for Wiles’s lost wallet, which turned up in the car. Then there was Jimmy, a 20-year-old grey GMC, which gave the bands some trouble on the tour.

“To be very clear, in no time did the Jimmy break down,” Ernyey said. “There is a loose wire, and when it’s not loose the thing works.”

Tour mishaps were for the large part few and far between. The bands were grateful for the opportunity to tour with one another.

“Even though our music is somewhat different, like our approaches are different, they compliment each other really well,” Vutcharangkul said. “This tour was really serendipitous, you know as much as like these two clashing bands or like bands of different sounds playing together.”

Like many of the greats — Pink Floyd and The Strokes to name a few — both bands got their start in college, but each has its own unique origin story.

“Me and Thor had been jamming together for awhile my freshman year and then he studied abroad with Brendan and after they studied abroad decided to form a group and we needed a guy to play base, so we scooped Dave and that was kind of the inception of Wet Dreams, or Swete Dreams fka Wet Dreams,” Ramos said.

The former band name, Wet Dreams, was pulled from a magazine that listed good, two-word combinations. The band chose Wet Dreams because it was provocative.

“We wanted to spark shock and interest so we could play shows,” Vutcharangkul said.

The name changed when the band started to become more serious and honest with one another about why they were in the band.

Ramos describes the band’s style as being reminiscent of the garage psych movement in the 2000s. They also take a lot of inspiration from surf rock and surf punk and try to emulate bands like Waves and Together Pangae. Vutcharangkul, Ernyen and Helms give Ramos credit for most of the songwriting, mixing and mastering.

Then there’s Talk to Plants, who refused to disclose any information behind the origin of their name. They label themselves as “herb-wave” or “avant gourd.” Some of their music is influenced by psychedelic rock.

“On the note of psychedelic rock, we do not like the connotation of it. However, we very much so agree with the idea of consciousness expansion through music,” Chase said.

The band also cites the structure of Indian classical music as an influence on some of their songs. Several of the bandmembers are also members of the College of William and Mary Indian Music Ensemble.

Other bands that have influenced the group are Pink Floyd, Animal Collective and Car Seat Headrest. Ginsburg said that Car Seat Headrest, whose frontman Will Toledo got his start at the College, was not just a music influence, but also a scene influence. Fox also added that learning about the origins of Car Seat Headrest was an inspiration to him.

“It’s so cool because when we were coming in for freshman year, Car Seat Headrest had been around for a long time, but I had just heard of him the summer before and it seemed like his popularity was soaring and then when I got here I realized he went here,” Fox said. “So to see someone who just existed in the same music space that I was getting into actually making it showed me that it was possible.

Both bands praised the College’s music scene and said that it offered them a tremendous amount of assistance and encouragement. Talk to Plants would not have formed if it had not been for a student-run jam session called “Free Beer.”

“It wasn’t until we got involved with Free Beer that Talk to Plants formed,” Chase said. “Aaron Staple is the godfather of Talk to Plants. Going to this place called ‘The Brewery’ every Friday, Aaron Staple’s house, we were able to experiment with sounds.”

The bands also thanked various on-campus music organizations, like Front Porch Society, the Meridian and Radio, for helping them along the way.

“All of us owe our musical careers to various musical organizations on this campus,” Ramos said.

“And that was something we were all super grateful for,” Chase said. “That meant a lot to all of us.”

Both bands said they would like to plan another tour in the future. Next time, they hope to conduct a longer tour that will give them more time to rest and explore the cities in which they play. As far as current projects go, both Swete Dreams and Talk to Plants will be releasing their new albums in the upcoming weeks.