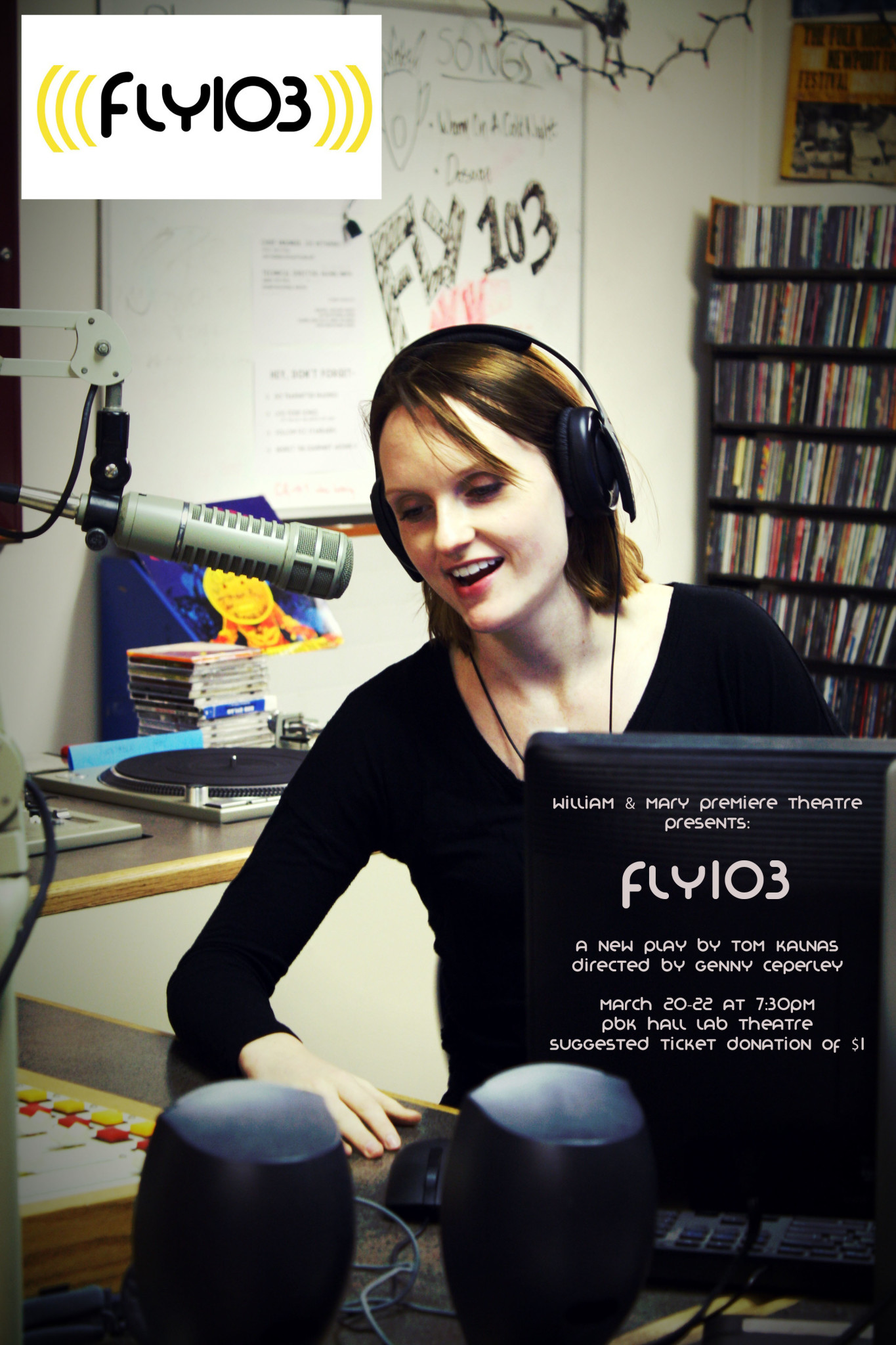 Whether he was lying on the floor, lighting candles around the room, scrawling ideas on a whiteboard, carrying his notebook with him at all times in case an idea suddenly struck him or listening to the unique rhythms of artists ranging from Miles Davis to Kendrick Lamar, Tom Kalnas ’17 drew from a host of sensory and kinetic engagements to inspire his playwriting process. After two years of work, the result is “Fly 103,” Kalnas’ original play, which will be performed this week in the College of William and Mary’s Phi Beta Kappa Memorial Hall Lab Theatre.

“Fly 103” follows a radio DJ, Dr. Drea (played by Kirsten Linder ’18), who struggles to preserve the integrity of her artistic choices as she transitions from working in a small, local radio station to a mass-market media conglomerate, “Pump.com.” Kalnas described how this change unravels during the play.

“There is a big shift in, for instance, in what she is allowed to say on the radio, and what she has to say, and even like the music that has to be played, and what she’s allowed to do, and that sort of thing,” Kalnas said. “That’s the main struggle of the show, is her dealing with this and trying to maintain a sense of independence and freedom through that.”

The play incorporated a number of original design elements. For example, the design process involved the branding of the fictional company, “Pump.com,” creating a logo that a marketing firm might realistically create for a company of that nature.

“I was really excited about the conversation it sort of put forth that I think a lot of us in the arts are facing going out into the real world, of sort of what’s important to us, what stories do we want to tell, and how comfortable are we being less financially comfortable telling those stories,” Ceperley said.
Kalnas described another major component of the play that focuses on a folk bar, The Apollo, that is struggling to stay financially afloat, and how this business, combined with musical elements, attempts to revive itself, raising questions of whether it is worth sacrificing “artistic integrity for economic success.”

Genny Ceperley ’17, the director of “Fly 103,” described the various design details of The Apollo and the radio studio that had to be organized. She discussed the contrasting spatial qualities of each, The Apollo with patchwork tablecloths and dim lighting and the studio with slick, silver hardware and fluorescent lighting. She noted how these spaces relate to the characters that move around in them.

“It’s sort of showing the two — this spectrum of technology versus anti-technology and these two spaces … that exist on the either side of that line, and then letting the characters move in and out between them, and sort of show these different perspectives without saying this is the right one, this is the wrong one,” Ceperley said.

The play incorporated a number of original design elements. For example, the design process involved the branding of the fictional company, “Pump.com,” creating a logo that a marketing firm might realistically create for a company of that nature. The play also involved the digital production of original music. There is even some live music performed during “Fly 103.”

“There is a big shift in, for instance, in what she is allowed to say on the radio, and what she has to say, and even like the music that has to be played, and what she’s allowed to do, and that sort of thing,” Kalnas said

The play’s major focus on music is no accidental occurrence. Kalnas discussed how music played a role in how he came up with an idea for the play.

“I found a lot of comfort from writing about the radio,” Kalnas said. “Because, at that time, I did not consider myself very well-read, I did not consider myself very well-cultured, but I knew music pretty well. And I knew that I could write about music. And writing about the radio was a comfort for me because the radio is the outlet, is the middleman between the music and the consumer, and I thought that middleman, that connection, is so interesting and that middleman is being so affected right now.”

Beyond idea-making, Kalnas also described the influence of different musical styles on his writing style. The work of musicians — jazz, rap and blues musicians, for example — and the ways in which they shape their rhythms, fascinated Kalnas and influenced his writing.

The writing process, for Kalnas, was a feat that slowly developed over the course of two years. It was not always an easy process. He was at times challenged with finding the ideas he was looking for. But when he did come up with a solution, he compared the feeling of finally finding that idea to the kind of “relief” of pulling a splinter out of one’s skin.

Some of the play’s integral components included marketing and business elements. Kalnas, who is a double major in marketing and performance, believed that being a marketing major and having an understanding of business was useful for improving his play.

Another one of the issues associated with markets and media consumption that the play focuses on stems in part from a play that Kalnas read by playwright Heathcote Williams. These ideas of media consumption not only filtered into Kalnas’s playwriting, but it also had him reconsidering his personal media consumption habits.

“I realized that I was taking in too much. So now, I don’t go on Facebook, I don’t go on social media sites,” Kalnas said. “I really changed the quality of data that I’m taking in, and I’m much happier because of it.”

Elizabeth Flatt ’20, the head of publicity for “Fly 103,” said she thought the play transmitted an important message about media consumption that she hoped would have the members of the audience reconsidering the quality and amount of data they convey online.

“I’m kind of hoping … that it makes people look at what they’re posting … and say, ‘Is this something that’s really going to enrich the lives of everyone around me? Is this really content that’s worth sharing right now? Or do I want to save what I have to say for a time when I have that’s more important or more special to me? …What moments do I want to share?’” Flatt said.

Ceperley expressed the same sentiment, believing that “Fly 103” would have the audience reconsidering its media habits.

“It’ll make them stop and think about the content they put out there,” Ceperley said.

The play involved a diverse set of skills and creative abilities ranging from playwriting to design elements to acting to music production. Ceperley touched on the efforts of the play’s production staff and how the play’s many components amalgamated to the play that it is now.