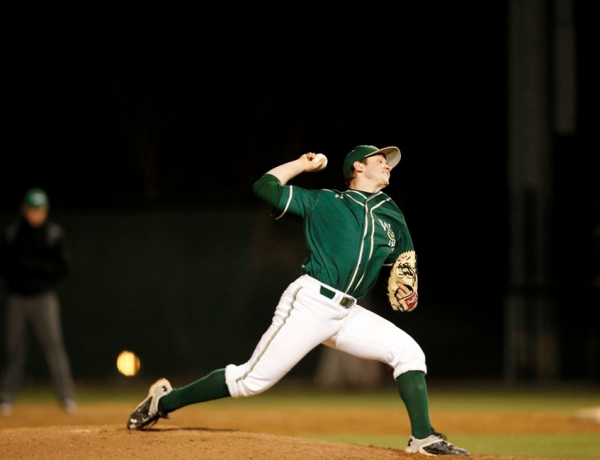 William and Mary finished an up-and-down week Sunday. The Tribe (13-10, 1-2 CAA) went 2-3 and opened up Colonial Athletic Association play on the road with a weekend series. Inconsistency plagued the Tribe offense, as it dropped a contest with Virginia Tech, beat Virginia Military Institute and salvaged the Sunday game from a set with North Carolina-Wilmington.

Tuesday, the Tribe traveled to Blacksburg to take on the Hokies (14-12). It was a pitcher’s duel early, until the top of the third inning when senior infielder Ryder Miconi hit one over the fence with nobody on, giving the College a 1-0 lead. Two innings later, the Tribe lead was upped when sophomore infielder Kyle Wrighte tripled, then was driven in on a sacrifice fly by junior outfielder Ryan Hall. The 2-0 Tribe lead looked to be enough, but did not last.

Senior right-handed pitcher Aaron Fernandez, in the game in relief of sophomore left-handed pitcher Nick Raquet, got the first two outs of the bottom of the seventh. But two walks for the Hokies set the table for a three-run homer, putting Virginia Tech on top to stay. The Tribe got a man in scoring position in the top of the ninth with only one out, but it was not to be, as the Hokies struck out the next two batters to preserve the 3-2 victory.

Wednesday night, the Tribe returned to Plumeri Park to take on the Keydets (10-13) in its only home game of the week. The College took advantage of five wild pitches, four walks and a balk in the first two innings to take a 4-0 advantage over the Keydets. In the bottom of the third, the Tribe tacked on another run on a sacrifice bunt.

While the offense was producing, senior right-handed pitcher Daniel Powers was holding the fort on the other side.

“Powers did a good job of using their aggressiveness,” head coach Brian Murphy said. “He was pretty sharp with his breaking ball … whenever you have all three pitches, you give the lineup an awful lot to think about.”

Powers pitched seven scoreless innings, giving up only four hits. He struck out seven straight at one point, from the last out of the third inning to the last out of the fifth, finishing with 11 total strikeouts. He took his first win of the season, increasing his record to 1-2.

The Tribe offense was not done, as it added even more insurance in the bottom of the sixth inning. An RBI single for junior infielder Cullen Large and an RBI fielder’s choice for senior infielder Charles Ameer gave the Tribe a 7-0 lead that was enough for the win.

“I didn’t think we were very good offensively,” Murphy said. “Most of what we got they gave us, whether it was walks or wild pitches or whatever it may be. We had a few better at bats later, though.”

Friday, the Tribe played the first game of a weekend series against UNC-Wilmington. After a quiet top of the first, the Seahawks led off the bottom with a home run to deep left field. After a scoreless second inning on both sides, UNC-Wilmington’s bats woke up yet again. After two walks, three consecutive batters homered. That explosion put the Seahawks in complete control, up 6-0. They scored another run in the fourth and four more in the fifth, growing the lead to 11-0. Sophomore catcher Hunter Smith hit his first home run of the year in the top of the sixth, but that was all the College could muster, eventually falling 11-1.

Saturday, the Seahawks attempted to win the first series of CAA play. In the top of the first, the Tribe struck to open the game when Ameer singled to score Miconi. After an uneventful bottom of the first, the Tribe took advantage of a Seahawks error to score an unearned run on a Hall single to gain the 2-0 lead. In the top of the fourth, the College added on again with a Large double, which scored Hall. The Seahawks cut into the lead in the bottom of that inning, but the Tribe extended the lead back to three on an RBI single by freshman infielder Patrick Ryan. After UNC-Wilmington drew within two again, Hall scored on a wild pitch to go up 5-2 in the seventh.

The tide turned in the bottom of the ninth for the Seahawks. Sophomore left-handed pitcher Bodie Sheehan opened the inning going for the complete game win for the Tribe, but was pulled after giving up a single to the first batter of the inning. In came junior right-hander Robert White for the save. He hit the first batter he faced, setting up first and second for the Seahawks with no outs. White proceeded to walk the next batter, loading the bases. The following hitter for the Seahawks doubled, clearing the bases and tying the game at five all. After an intentional walk, junior right-handed pitcher Charlie Fletcher relieved White to try to send the game into extras. Fletcher got the first batter he faced to fly out, advancing the runners to second and third with one out. The Seahawks sent infielder Cole Weiss to pinch hit, and he delivered, driving home the walk-off run on a fielder’s choice. The 6-5 decision set up a possible UNC-Wilmington sweep.

Conversely, the Tribe offense started the game strong. Miconi, batting second, homered to start the scoring. UNC-Wilmington doubled that, snatching back a 2-1 lead in the bottom of the inning. After a quiet second, the Tribe erupted in the third. A Miconi RBI double, a Large single that scored two, a Smith single which plated another run and a two-run Wrighte homer to deep left added up to a six-run inning, giving the Tribe a commanding lead that it did not relinquish.

The Seahawks scored two in the bottom of the third with a two-run home run, but the Tribe answered in the fifth with a Hall double that brought home two. In the seventh inning, the College added a run to bring its lead to 10-4. In the bottom of the inning, the Seahawks put together a rally that nearly overtook the Tribe as an RBI groundout, a single that scored a run and a three-run homer clearly gave UNC-Wilmington the momentum. After a couple of pitching changes, freshman right-handed pitcher Jamie Sara was able to strike out a Seahawk to retire the side and quiet the rally. UNC-Wilmington fought the last two innings to tie the game, but Powers came in for the save, finishing off a 10-9 victory. The Tribe won its first game on the road and its first conference game.

The Tribe will take on Norfolk State and Old Dominion Tuesday and Wednesday, respectively, both at Plumeri Park. The College will get another crack at a CAA foe when it travels to Delaware for a weekend series against the Blue Hens Friday, Saturday and Sunday.