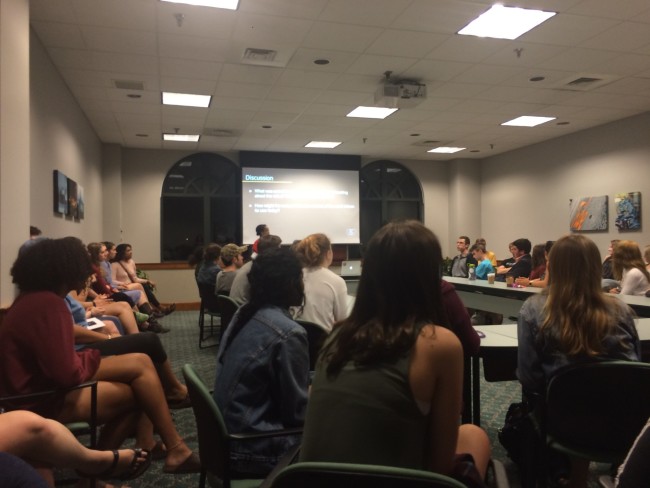 Wednesday, April 5, members of multiple Greek life organizations gathered to grapple with a complex question surrounding race and racism — the use of the “n-word.”

The event, hosted by the organization Greeks for Respect, Inclusion, and Diversity, sought to increase students’ understanding of the historical and social context of the n-word, what its usage implies and how these discussions fit into the Greek community. The event attracted individuals from a range of Greek organizations, races, ethnicities and identities, although more attendees were sorority members than fraternity members.

Alex Winkowski ’17, a co-founder of GRID and member of the fraternity Sigma Phi Epsilon, said that this event was coordinated to discuss the history of the n-word and the consequences of its use.

I think a lot of people have a weird feeling about, ‘can I use this word, can I not use this word’ — I think there’s a lot of discussion over the past couple of years especially in terms of who can say it, who can’t say it,” Winkowski said.

“I think a lot of people have a weird feeling about, ‘can I use this word, can I not use this word’ — I think there’s a lot of discussion over the past couple of years especially in terms of who can say it, who can’t say it,” Winkowski said. “And I think the whole reason why we wanted to have this kind of conversation was to come out and say … nobody’s saying that you can’t use a word, but what we’re trying to talk about and understand is that there are consequences for the words that you use, and in this case, this word has a very ingrained history in America and its use in slavery, and we’re trying to kind of heighten awareness about that, and you need to take the historical and social context of the word when you’re using it.”

The event came in the wake of recent discussions by students surrounding the posting of a public Spotify playlist that had the n-word in its title, created by a white student in a Panhellenic sorority on campus. However, Winkowski said that this conversation was one that needed to be had regardless of specific instances that brought it to light.

“While there are events on campus that do spark conversation about it, I think we really are trying to not be so reactionary in the way that we’re doing our peer education. We’re trying to be more proactive,” Winkowski said. “While certain campus events might bring certain issues to light, I think that this has been an issue for a while, and I think there’s a lot of people in the room who can speak to events that we heard today — at parties, people hear the word a lot. So I think while there are certain events that bring the issue to light, I think … this has been an issue for a while.”

The presentation, led by Nia Gibson ’17, a member of Delta Delta Delta sorority, and Meronne Teklu ’17, a member of Alpha Kappa Alpha sorority, was interspersed with multiple short YouTube videos presenting information about the topics of interest and sparking discussion among the attendees about the content they were learning. After viewing each video, the audience broke off into smaller discussion groups, each led by a GRID member.

The presentation began with a broader focus on race and racism in general. Gibson and Teklu first screened a video that targeted misconceptions about race and racism that touched on, among other topics, race as a social construct and institutional racism.

“This talk is definitely about one word, but it’s also about all of racism,” Gibson said. “You can’t have that conversation without discussing all of racism.”

The focus then honed more specifically on the usage of the n-word. The next video shown, called “The N-word Double Standard” primarily sought to explain the historical and social context surrounding the use of the n-word.

This video brought up the concept of the n-word being used by some black individuals as potentially a mode of “reclaiming” the word as an act of “defiance,” given the history of slavery and oppression of African-Americans that surround the word’s usage. Some students used this concept as jumping-off point for discussions surrounding how the implications of the word’s usage fluctuate depending on who is saying the word.

The discussion shifted into a conversation about the usage of the n-word in music, leading some students to question the ethics of listening to this music and singing along. Students discussed potential ways to react to a party situation in which music that includes the n-word is being blared over the speakers and the crowd of people in attendance begins to sing along. The conversation focused on the implications of singing along to this music, saying nothing while those around you continue to sing, or trying to somehow intervene.

Finally, the presenters called for students to consider the experience of black people hearing the n-word directed at them. Gibson and Teklu screened a video that compiled anecdotes of black individuals who had dealt with situations involving the n-word.

“Recognize that racism is not always overt,” Gibson said. “If it’s in songs, if it’s other things — it always has a legacy, and it can be latent … think about what it’s like to be the black person at the party where that’s happening.”

Sophia Brodnax ’20, a member of Kappa Kappa Gamma sorority who attended the event, found that the structure of the presentation with the videos and discussion breakouts was helpful.

I think everybody felt really safe to talk about their feelings and their opinions throughout the presentation,” Brodnax said.

“I think everybody felt really safe to talk about their feelings and their opinions throughout the presentation,” Brodnax said. “I’m really glad I came just to hear other perspectives, I guess, and learn from the videos because I definitely learned a lot that I didn’t think about before.”

Although the focus of this particular event was race and the n-word, GRID, which was formed in spring 2016, does not solely target issues surrounding race and Greek life, but also targets other issues such as concerns about gender and how gender non-binary and queer individuals fit into the spaces of Greek organizations.

Winkowski described why the GRID initiative was formed, citing the importance of inclusivity and diverse perspectives among what can be perceived as a largely homogenous group of people in Greek communities, among other motivations.

“We kind of realized that Greek life has very specific kind of needs when it comes to talking about issues of respect, inclusion and diversity, so we decided to start an organization where we could kind of start a dialogue and create a space where respect, inclusion and diversity is a standard to which to uphold all of ourselves and Greek life accountable,” Winkowski said.

Gibson and Teklu concluded their presentation by emphasizing that the n-word continues to be an issue on campus and that understanding the context of the word is an important aspect of interpreting its usage.

“These things still happen today on this campus,” Teklu said. “There are still people yelling this word out their cars down Richmond Road trying to insult other people … so I think it’s really important to bring back the context.”