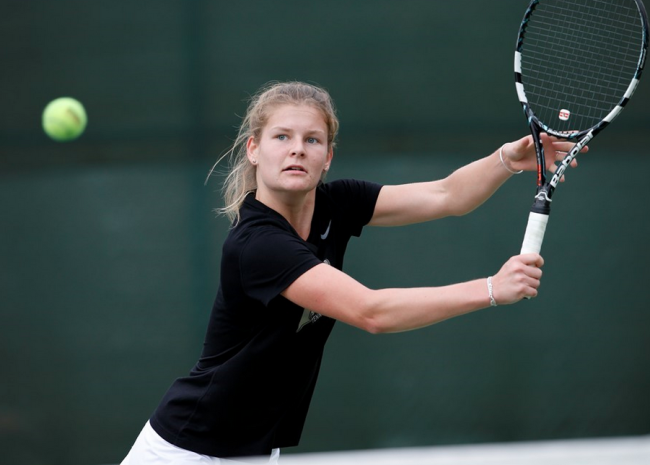 The William and Mary men welcomed East Carolina to the McCormack-Nagelsen Tennis Center Friday. The Tribe (9-9) outmatched the Pirates (14-7) in a landslide 6-1 victory.

The College secured the doubles point as the duo of senior Addison Appleby and sophomore Tristan Bautil defeated East Carolina opponents 6-4 at the No. 1 spot while junior Christian Cargill and senior Damon Niquet claimed victory at the No. 2 spot.

The Tribe kept the momentum rolling with three straight singles victories, clinching the overall match win. Niquet finished first, defeating East Carolina’s Kasey Countee 6-0, 6-3 at the No. 5 spot. Cargill followed in the No. 2 spot, conquering Pirate Vlad Anghel 6-2 in both sets and completing his 11th victory at the No. 2 spot with a 9-5 record. Junior Lars de Boer’s 7-5, 6-0 win at the No. 6 spot put the College up 4-0, securing the win.

“Everybody fought hard and a lot of guys are playing well,” Cargill said. “It’s a good thing to see.”

Junior Alec Miller defeated East Carolina opponent Fredric Lehfeldt 7-6 (3), 6-0 at the No. 4 spot, followed by Aidan Talcott at the No. 1 spot with a 6-4, 6-5 defeat over Pirate Freddie McGeehan, who retired for injury. Appleby fell in a heartbreaking three-set matchup 7-5, 2-6, 10-3 against East Carolina foe Ronny Georgi.

Saturday, the Tribe welcomed Middle Tennessee (11-12) to the Millie West Tennis Facility. The Tribe lost the epic matchup 4-3 after a long, unrelenting battle at the No. 5 spot by double-header Niquet.

Everybody fought hard and a lot of guys are playing well.”

The College started down early in the matchup, losing the doubles point to the Blue Raiders. Talcott’s quick victory over Tom Moonen at the No. 1 spot, both sets 6-2, tied the match up 1-1. This was Talcott’s ninth win of 15 tries at the No. 1 spot, improving his overall season record to 13-9.

“I think we need to execute a little better,” Cargill said. “We had chances in basically all of the matches and we didn’t come through, but we have a few more matches to work on it.”

With a 6-3 win in both sets over opponent Nicolas Buitrago, de Boer brought the Tribe back in and tied the match up 3-3. The match fell on the ongoing No. 5 contest between Niquet and Middle Tennessee’s Luis Morillo. Niquet stole the first set 6-4, but Morillo came back and took the second set 6-2. Morillo took the back-and-forth tiebreaker set 7-5, claiming the victory for the Blue Raiders.

The men will finish off their regular season by hosting Virginia Commonwealth Wednesday at 3 p.m. and Old Dominion April 16 at 1 p.m., both at the Millie West Tennis Facility.

Saturday, the Tribe women defeated Old Dominion (10-8) at the Millie West Tennis Facility 5-2 on Senior Day. Senior Marie Faure contributed to the victory with a win in both doubles and singles play in her final appearance at home.

The College (10-10, 3-1 CAA) claimed the lead early on, claiming the doubles point. Junior duo Ekaterina Stepanova and Olivia Thaler and the pair of Faure and sophomore Lauren Goodman defeated Monarch opponents 6-2 and 6-3, respectively.

“Today’s game was awesome,” Stepanova said. “We won, and it was a good team effort.”

Freshman Rosie Cheng fell at the No. 4 spot 6-1 in both sets to Nataliia Vlasova. Stepanova came out on top at the No. 1 singles spot, defeating Monarch Ingrid Vojcinakova 7-5, 6-3. Faure conquered her final singles contest at home 7-6, 6-1 against Old Dominion’s Eliska Petrackova at the No. 2 spot. At this point, the Tribe led the Monarchs 3-1.

We’ve still got a lot to improve on, but we’ve got a couple weeks left to practice and we’re going in the right direction.”

At the No. 3 spot, freshman Natalia Perry lost a three-set contest against Natalya Malenko 6-4, 3-6, 7-6. Goodman’s 7-6, 6-3 victory at the No. 5 spot secured the Tribe conquest over Old Dominion. Thaler finished off the match with an unyielding three-set win over Marijana Novakovic 6-3, 4-6, 6-4.

“Our seniors played well and we won, so it was all around a good day,” head coach Tyler Thomson said. “We’ve still got a lot to improve on, but we’ve got a couple weeks left to practice and we’re going in the right direction.”

The women will close out the regular season on the road at VCU April 15.