Home Variety Campus Events A night of hip-hop and fashion 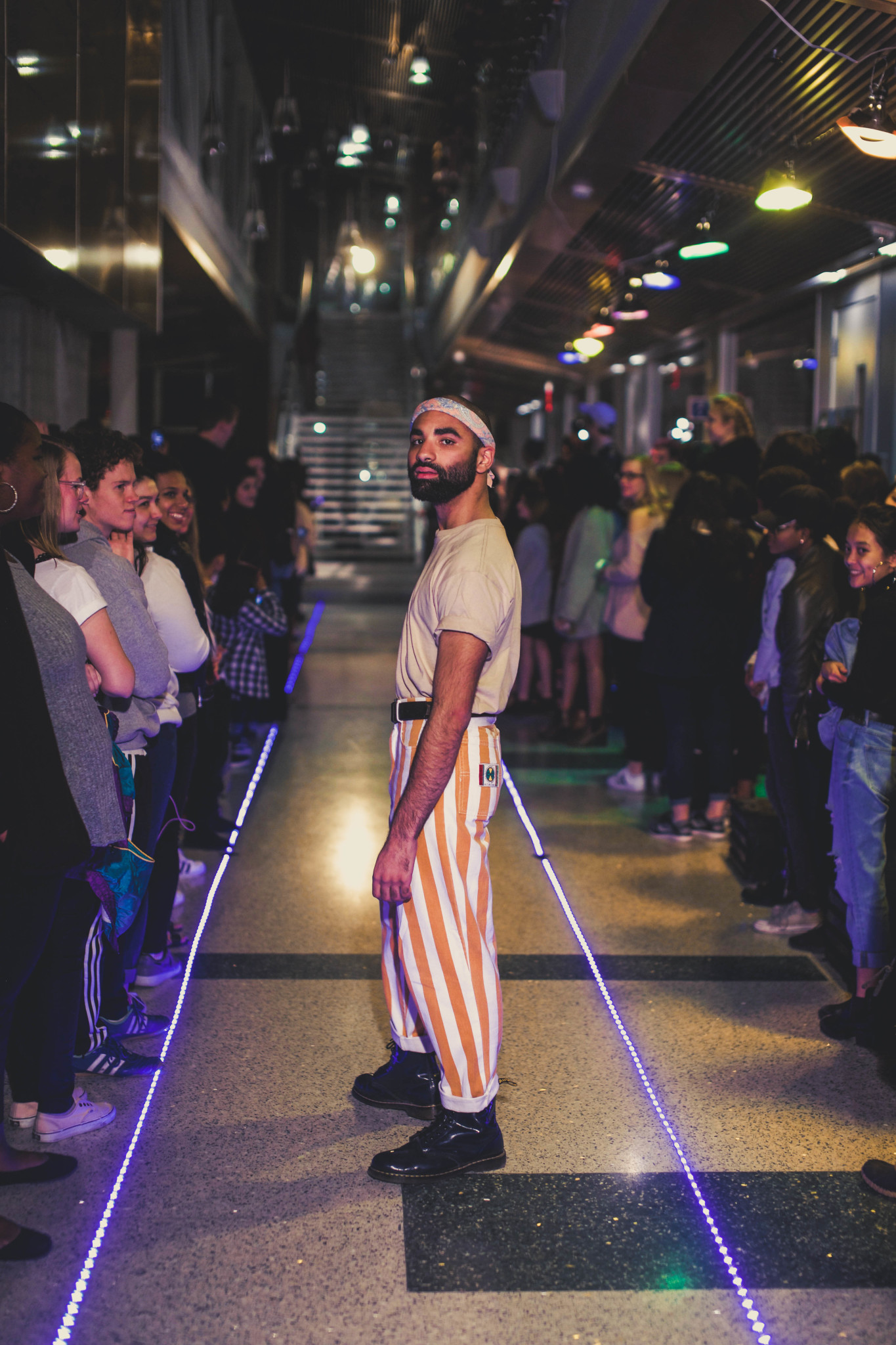 If, for some reason, you attempted to study in Integrated Science Center 3 last Friday, you would have been met with an surprise. By 9:00 p.m. April 7 the building was filled with music, colorful lighting and hundreds of students waiting for the start of ASTRAL, the inaugural fashion show of Rocket Magazine and Students of Hip-Hop Legacy.

The idea for the ASTRAL fashion show has two separate origin stories. Last year, Rocket’s fashion director Kyle Lopez ‘17 and Isabella Fox Arias ‘18, who currently serves as Rocket’s deputy editor, discussed the idea of putting on a fashion show. There was little time left in the year to put a show together, so the pair tabled the idea and began discussing it over the summer with style editors Amy Zhang ’19 and Bronwyn Roseli ’19.

During the fall semester, Eze Ragazzi ’19, the president of SoHHL, had also gotten the idea to do a fashion show with Rocket, so he reached out to the magazine that fall. It turns out SoHHL was the missing piece to the puzzle Rocket had been looking for.

“We really wanted to have a musical element to the event,” Zhang said. “We didn’t want it to just be a normal, typical fashion show because they have dead-face models. It’s very serious. It’s a little bit boring honestly, and it’s really really fast-paced. We wanted it to be a full blown event.”

The next step in the process was finding designers for the show. According to Zhang, Rocket drew some inspiration from VFILES fashion week, which showcases several small designers one after the other in one day.

Zhang said that although the College of William and Mary did not have a fashion and design program, they knew that Virginia Commonwealth University did and wanted to reach out to them first.

Matthew Gayot, one of the two designers of the lifestyle/skate clothing brand Solace, was also a good friend of Raghazzi’s. Patrick Bender was the second designer of Solace. Raghazzi added that he referenced a blog called VA Got Now that had information on fashion designers in Virginia.

Arias began reaching out to interested designers to further discuss the show.

“After getting in contact with the designers and figuring out who was interested, I set up Skype calls with all of them to talk in greater detail about the show,” Arias said in an email.

In total, four designers were showcased. The fourth designer was Lama Ali, a fashion design major at VCU. Both members of Rocket and SoHHL had heard of Ali from a viral Buzzfeed article about a hidden message she left for her professor in one of her art assignments.

Members of SoHHL worked on the show’s music. Ragazzi and Jeff Bunkin, the vice president of SoHHL, drew inspiration for the performance element of the show from watching Playboi Carti’s performance at New York Fashion Week. After watching his performance, they decided that they wanted the artists to perform while the models were walking.

Ragazzi, Bunkin and other members of SoHHL began pairing artists with designers.

“We had asked the designers if they had an artist, that was specific, that they knew really represented their clothes,” Ragazzi said.

One of the names Tucker gave Ragazzi was Isaiah Jeremiah, an artist based out of Richmond, Va. Unfortunately, a rapper named Josh G, the artist originally meant to perform with FFNR, could not show up in time for the show. Luckily, Emmanuel Chiappini ’17, a member of SoHHL was able to perform in his place.

Chiappini wasn’t the only SoHHL member and student to perform that night. Huey Shy, known to most on campus as Julian Scoffield ’19, performed for the brand Solace, and Preston Neukirch ’18 performed with Lama Ali.

One difficult component of hosting the fashion show was finding a venue. Zhang says they knew they wanted to incorporate a staircase. Originally they wanted to utilize the v-shaped staircase in Andrews Hall, but ran into occupancy issues. They decided instead to use ISC 3 and felt that its modern look paired well with the hip-hop music and street style fashion.

Rocket and SoHHL also held model casting sessions. Lopez, who was in charge of casting the 31 models, wanted to pick people from all different aspects of campus life.

“We wanted a cross-section of every experience at William and Mary,” Lopez said. “People from all walks of campus: people in Greek life, people not in Greek life, people in cultural orgs., people who play sports because we thought that that would make for a much more interesting show and would attract a really large group of people.”

The show did attract a large audience, selling over 400 tickets. Everyone in charge of the fashion show agreed that they wanted to donate the proceeds. Lopez suggested that they donate to the scholarship fund of the Williamsburg Contemporary Arts Center. The fund provides scholarships for graduating seniors residing in Williamsburg and James City County and Bruton District of York County School Districts wishing to pursue art in college or at an arts school.

“We just thought with the national endowment for the arts being cut, and you know the arts are constantly being threatened, and for all of us Rocket is a really important creative outlet,” Lopez said. “It’s a really great way of relieving stress and creating something that’s beautiful and that’s cool. That experience is something that everyone should have. And, you know, giving back to high schoolers and giving them more opportunities, if we can do that in our own small way then that seems like a really good idea.”

Everyone involved in putting ASTRAL together said they  were pleased with how the show turned out.

“It was a lot of hard work over a long period of time, but it felt so good to see a physical representation of our efforts that people seemed to enjoy,” Roseli said.

Ragazzi also added that he enjoyed seeing a small idea turn into something bigger.

“It’s cool that it was an idea and you get to see it through,” Ragazzi said.

Both members of Rocket and SoHHL plan on hosting another fashion show next year. They hope to expand the show to include more designers and artists.

Zhang hopes that, although the College does not have a fashion and design program, the show will be to include designers from the College.

“We do know that there are some people at this school that make their own clothes,” Zhang said. “It would be great to be able to incorporate William and Mary students.”