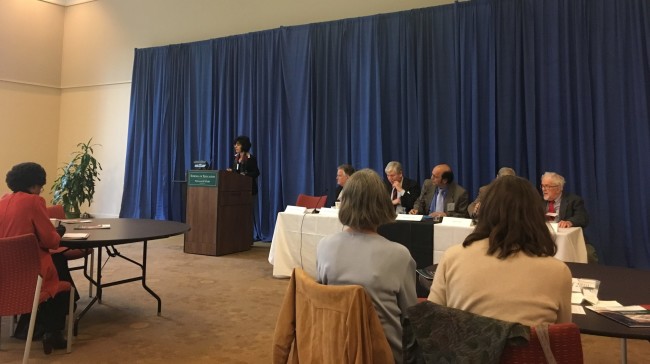 The Reves Center for International Studies hosted a conference April 7 focusing on past, current and future issues in the Middle East. The conference was hosted in memory of James A. Bill, the founding director of the Reves Center.

The College of William and Mary Provost Michael Halleran remembered Bill as a renowned scholar on Iran and the Middle East and as a highly acclaimed professor.

The considerable success of our Reves Center can be traced to the vison, energy and accomplishments of its founder,” Halleran said.

“The considerable success of our Reves Center can be traced to the vison, energy and accomplishments of its founder,” Halleran said. “A distinguished scholar of the Middle East, particularly on Iran, he was also a marvelous teacher, described by one of his students as the best ever … For more than a decade Bill molded the Reves Center into one of the country’s leading undergraduate international studies programs.”

The conference brought together scholars and friends of Bill who had worked with or been inspired by his work on Iran. Speakers discussed the history of Iranian politics and conflict, but also provided analysis for the future of the area and its relationship with the United States.

A recurring idea discussed throughout the conference was that youth in both the Middle East and the United States may play a key role in reshaping a relationship between a western hegemon and conflict-ridden states.

Executive Washington Editor and Chief Commentator for The Wall Street Journal Gerald Seib, who was the keynote speaker at the conference, said youth in both areas may be crucial for building a more peaceful relationship.

“The best hope for a new start is in fact generational changes,” Seib said. “Those different realties can only be seen when both countries are run by a new generation of leaders. Younger tech-savvy Americans and Iranians who can’t understand why two great and learned societies fell so far out of favor with each other and don’t see religion as a barrier but as simply another fact of life.”

Georgetown University Islamic history professor Tamara Sonn began the conference by presenting a history of Iran and its cultural and political changes. One of the changes she noted in the 1990s was the youth bulge.

“The 1990s — the era of relative tranquility in Iran and also one of significant change in Iran’s demographics — the youth bulge and all of that,” Sonn said. “The young people had no memory of life under the tyranny of the Shah and they were increasingly connected electronically to their local peers and they chafed under the rigid social restrictions of the elder clergy. They wanted a more open and globally integrated Iran and found their hero in Mohammad Khatami.”

Sonn said the youth in Iran were not only fighting restrictions based on religion, social class and gender, but they were also changing the political climate of the region by electing Khatami, who gave rise to the Tehran Spring and the Iranian Reformist Movement.

“One of the debates between the reformers and younger generations and the curatic authoritarian side of the government is exactly this point,” Noorbaksh said. “We want to open the country to the outside world, we want to expose ourselves to the world culture.”

While many of the speakers discussed the positive role they expect current youth to play in the future, Director of the Pakistan Center at the Middle East Institute Marvin Weinbaum said he thinks the youth are overestimated.

You know, I’d like to believe as you do that youth are the great hope here,” Weinbaum said.

“You know, I’d like to believe as you do that youth are the great hope here,” Weinbaum said. “I am somewhat skeptical. First of all, I think what’s very clear is young people’s ability to compartmentalize. They can leave portions of their lives in a fashion which would be no different than young people here and yet hold views which are politically and even socially very different than what you would have thought.”

Weinbaum said that previous generations had the same expectations of change placed upon them and they were unable to provide the peaceful globalization process people had hoped. He said the process of globalizing not only economies, but also education, has led to backwards progression and movements like the Arab Spring.

He said that the Arab Spring was expected to increase political participation and foster democracy in the Middle East and parts of Africa; however, it was unsuccessful due to revolutions in Egypt and civil wars in Syria and Libya and led to a power struggle that spanned a large portion of the Middle East.

Nevertheless, Seib said that older generations are constrained by doubts about their ability to produce a global economy. He said that younger generations provide a fresh set of eyes from which to view global events and are not held back by past altercations.