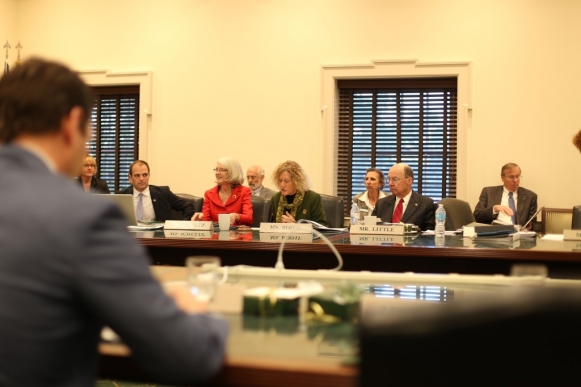 The College of William and Mary’s Board of Visitors met April 19-21 to discuss topics including faculty retirements, budget changes and the search for the College’s next president. These discussions resulted in the presentation and approval of 27 resolutions.

Resolution 1: The Richard Bland College Committee dealt with this resolution about appointments to fill faculty vacancies in closed session.

Resolution 2: This resolution dealt with a faculty promotion at Richard Bland College and the committee handled it in closed session.

Resolution 3: This decision to award academic tenure was handled by the Richard Bland College Committee in closed session.

Resolution 4: Psychology professor LeAnn Binger will be retiring from her role at Richard Bland. Among other accomplishments, she was a mental health worker at Central State Hospital, she served on the Local Human Rights Committee at Southside Training Center and she served on the Board of Trustees for the Virginia Museum of Natural History.

Resolution 5: English professor Timothy Evans will be retiring from his role at Richard Bland. He was active in the Richard Bland campus community and was responsible for Richard Bland’s recognition as the only college in Virginia cited in the National Directory of Exemplary Developmental Programs.

Resolution 6: English professor Linda Jefferson will be retiring from her role at Richard Bland. She was involved in many committees and sub-committees on Richard Bland’s campus and she was dedicated to public service and professional development.

Resolution 8: The Board approved the tuition and fees for Richard Bland for Fiscal Year 2017-18.

Resolution 9: The Board approved the operating budget for Richard Bland for FY 2017-18.

Resolutions 10-15: The Committee on Academic Affairs dealt with these resolutions in closed session. It covered the topics of appointments to fill vacancies in executive and instructional faculty, designated professorships, faculty leaves of absences, faculty promotions and awards of academic tenure.

Resolution 16: Business professor Hector Guerrero will be retiring from his role at the Mason School of Business. He joined the business school faculty in 1990 and formerly served as the director of the resident MBA program.

Resolution 17: The Board approved a change to the faculty handbook that allows non-tenure-eligible faculty to be awarded “emeritus” status.

Resolution 18: The Board approved the 2018-24 six-year Capital Plan for the Virginia Institute of Marine Science. This plan was developed using the 2011 Campus Master Plan and will be submitted to the Department of Planning and Budget and the State Council of Higher Education over the summer.

Resolution 19: The College was also required to develop a 2018-24 Capital Plan, which the BOV approved. This plan was informed by the 2015 Campus Master Plan and will also be submitted to the DPB and SCHEV over the summer, as well as to the Department of the Treasury.

Resolution 20: The Board approved the revised scope and budget for the construction of the alumni center, which will include an expansion and renovation that increases indoor and outdoor event space. The project is estimated to take 12-14 months to design and 15-18 months to construct.

Resolution 21: The building on Richmond Road that was formerly the Days Inn will now officially be named “Richmond Hall” and will be open for undergraduate residents in fall 2017.

Resolution 22: The BOV approved revisions to the staff assembly bylaws. These amendments were approved by the Staff Assembly in September 2016.

Resolution 27: The BOV formally charged the Presidential Search Committee with the task of actively seeking and compiling a diverse pool of candidates and then presenting no more than three finalists to the Board by February 15, 2018.