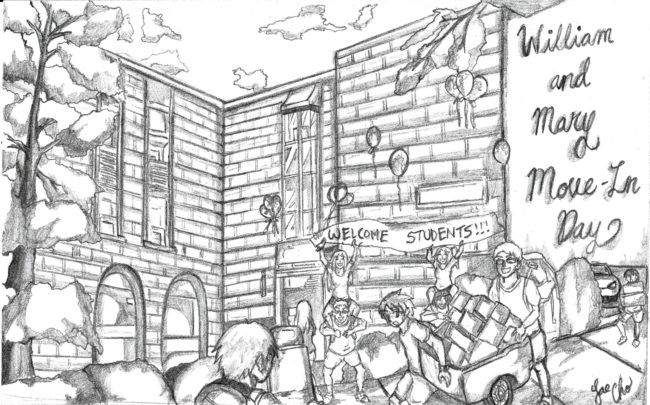 I’ve seen a lot of social media talk from incoming freshmen about their dorms. Namely, people complaining about what building they’ve been placed in for the year. While this is definitely understandable, the quality of the actual dormitory ends up having almost no influence on the overall experience of freshman year.

Last year, I lived in Fauquier in the Botetourt Complex. As I’m sure some of you have found out, it’s no five-star luxury hotel. With small rooms, no air conditioning and hall bathrooms with showers that don’t even come close to reaching my head, it was, at best, “homey.” Nevertheless, and maybe even because of the … ahem … unique dorm I was living in, my memories of Fauquier are fond.

This is pretty easily explainable, in my opinion: The relationships I made in my dorm helped make my freshman year one to remember. From my roommate to the guys next door and everybody else in Fauquier Third Upper, the times spent in my room or on my hall were good times.

You could say the same type of thing about Brown. It’s ancient and way out of the way. It has a wall around it that makes it really hard to actually get into the building. And the building itself is quirky as hell. Some rooms have suite bathrooms, others use a hall restroom. The microwave in the kitchen barely works. And yet, for all of its supposed disadvantages, my friends that lived in Brown loved it for the same reason that I enjoyed my dorm. The structure of freshman dorm living allows friendships to be formed in the building in which you live. It means that some of the quirks that would be derided otherwise become beloved and add to the character of the building.

The relationships I made in my dorm helped make my freshman year one to remember.”

That is not to say that you should want to stay in a trash heap. (Or, as us William and Mary students call it, the units.) I wish the College had dorms that were as nice as some of the other schools in Virginia. But going to any school requires making a compromise, and it just so happens that you chose good food selection over nice dorms. (Uh … wait … never mind. That’s a story for another column.)

I had some friends in Eagle Hall in the units. A couple were in G, another in F. Obviously, the building is not in the greatest shape. One of the showers in Eagle G was broken for almost six months, so the people on the second floor only had one shower for their use for most of the year. Even so, you can make the case that the students in the Green and Gold Village are the most tight-knit group of hallmates on campus. It’s clear that at least part of that is bonding because of the adversity they faced in the building. And I guarantee that many of them will wish this year that they were living right next door to a bunch of their closest friends.

Complain all you want about your dorm. I sure did. But at the end of the day, your freshman experience will depend much more on the relationships you make in and around your dorm than the age and amenities of your freshman hall. Have people over to your room. Play “Cards Against Humanity” in your lounge. Have that FIFA tournament with everybody in your hall. Make fun of the way your dorm can only have one shower with hot water at a time. And eventually, when you look back at your freshman year, you’ll remember your hall fondly.