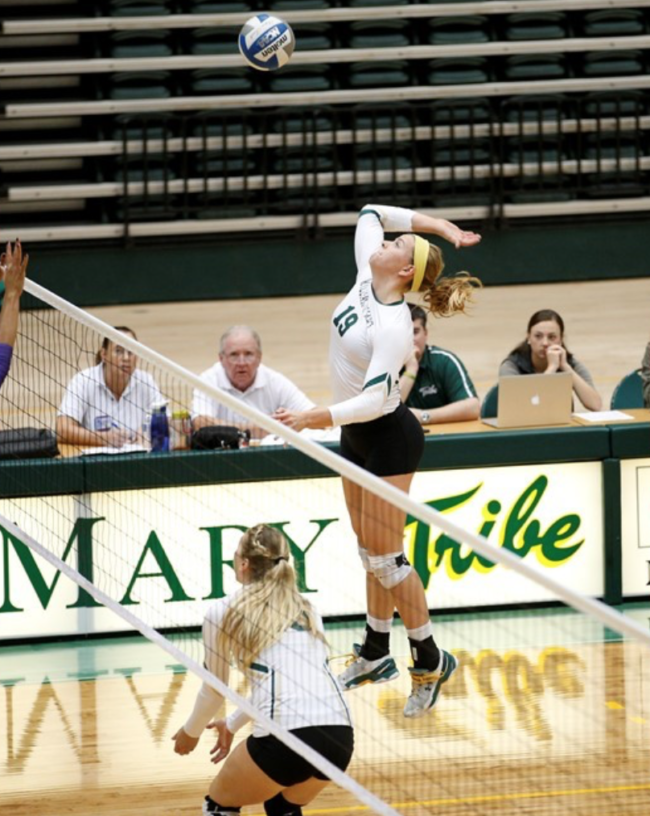 William and Mary welcomed Morehead State, Savannah State and Davidson to Kaplan Arena this past weekend in the Colonial Classic. Friday, the Tribe (2-5) fell to Morehead State (4-3) in a 3-0 sweep. Saturday, the College came back with a well-deserved 3-0 sweep of its own over Savannah State (2-5). Sunday, the Classic closed out with the Tribe falling to Davidson (5-1) in a hard-fought 3-1 loss.

Starting off strong, the College dropped the first set 26-24 to the Eagles. The second set served as the Tribe’s closest point to victory when senior hitter Sydney Biniak hammered down on the front line, giving the College a 23-21 lead. However, the Tribe gave up four straight to fall 25-23. Morehead State continued their momentum to easily take the third set 25-14, securing the match win.

“I think our first loss on Friday was like kind of a wake-up call that we needed to have more energy on the court,” sophomore setter Autumn Brenner said. “We kind of had a pregame talk and decided we needed to come out with more energy to start every match and to push through the last five or so points of every set.”

The Tribe switched gears Saturday when it faced Savannah State. The Tigers could not keep up with the College’s momentum in the first two sets, falling 25-11 and 25-15, respectively. In the first set, the Tribe was up 8-0 before the Tigers finally scored a point. Regardless, the College kept its lead, the largest gap being 20-3 before Savannah State caught up with six straight points. Kemp contributed two aces early in the second set while freshman hitter Lauren Moussaid carried the front line with five kills.

With no more than a two-point difference for most of the third set and the game tied at 19-19, the Tigers seemed to pick up some of the Tribe’s energy. The set ended 25-21 with a kill and service ace by Biniak.

“Our coach always says we don’t lose,” Biniak said. “If we learn, we don’t lose. We just have to figure out new day, new game, new opportunities to get better.”

Sunday, the College started off strong with a 25-21 victory in the first set, but the Wildcats came back fighting. Davidson took the second set 26-24 as well as the final two sets, both 25-23.

In the first set, the score gap was never greater than three points, and only once by that large of a margin, until the end of the set. A kill by Moussaid off a Brenner assist closed out the set for the Tribe’s final victory in the Classic. The second set was on the same track until the Wildcats went on a comeback six-point run, putting them up 17-15. The set was up in the air until the final moments, ended by a kill and a block by Wildcat junior opposite hitter Katherine Franz and Wildcat freshman middle hitter Ellie Crosley.

If we learn, we don’t lose. We just have to figure out new day, new game, new opportunities to get better.”

The Tribe had a promising start in the third set with an immediate 1-0 lead from a kill by Foote off a Brenner set. The College went on a five-point catch up streak in the middle of the set, closing the gap to 15-13 in Davidson’s favor. Back and forth scoring continued until the Wildcats ended the game with a kill by junior setter Mason Rooney.

Down 2-1 in the match, the Tribe refused to quit. The fourth set commenced with a kill by Moussaid. After yet another back and forth battle, the College was down 24-20. The team rallied after getting the ball back on a service error with two service aces by Biniak, closing the gap to 24-23. Despite the comeback at the end, a kill by Wildcats player Franz off a Rooney assist called the match.

Overall, both teams stayed competitive throughout the duration of the match. The Tribe doubled Davidson’s service aces 10-5. While it also led in digs, 62-60, the Wildcats were barely up in kills, 54-53, and blocks, 6-5. Biniak picked up her most kills of the Classic with 19. Brenner contributed the most service aces at three, and the most assists at 31. Turner contributed 20 digs to the Tribe’s back row play.

“Regardless of the fact that we lost two matches this week, I think we were really successful because we finally played Tribe volleyball,” head coach Melissa Ferris said. “We competed, they did the system that I asked them to run, and they made adjustments quickly. I’m very proud of the team and very happy with this weekend.”

The Tribe will head to North Carolina to compete in the Wake Forest Invitational Sept. 8 and 9. Colonial Athletic Association play will kick off when the College welcomes Delaware to Kaplan Arena Sept. 21 at 7 p.m.