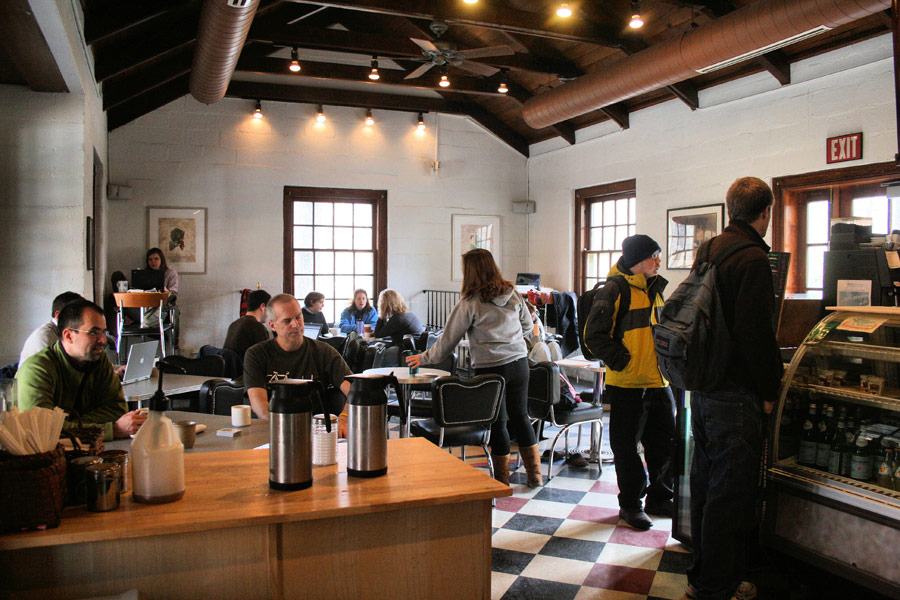 Eighteen years ago, a new round of renovations on Earl Gregg Swem Library was just beginning, the College of William and Mary’s chancellor was Margaret Thatcher, and most members of the class of 2021 had been born no more than a year earlier.

It was also 18 years ago that a group of students approached the administration about adding a coffee shop on campus, and a year later, The Daily Grind was born.

Throughout those 18 years, one face has remained the same at the College and in the coffee shop. That face belongs to Scott Owen, the general manager of The Daily Grind. Owen has been roasting coffee and serving sandwiches for nearly two decades since the restaurant’s inception, but soon he will walk away because after this year, he is retiring.

The Daily Grind is officially listed as part of the Sadler Center and operates under a five-year lease, according to state regulations.

The current lease will expire at the end of 2018, and Owen does not want to work for another half-decade.

“I’m retiring at the end of next year because I’ll be almost 62 years old, and to be honest with you, I don’t want to go till I’m 67,” Owen said. “This is kind of a bittersweet year for me because, like, this is my last class that I’ll see all the way through.”

After the group of students petitioned former Vice President of Student Affairs Sam Sadler ’64 for a coffee shop in 1999, the College granted a lease to the local company Williamsburg Coffee and Tea, owned by Todd Arnette.

Arnette, who owns The Daily Grind, originally planned to have students manage the store, but the experiment failed and the store needed a manager.

“[Arnette] approached me about coming in with my retail experience and taking it over, and it was sort of an agreement between he and I that whatever I could do with the place, it was mine to do,” Owen said.

During his tenure, Owen has grown what he called a “little tiny stand with coffee” into a popular spot on campus and in the Williamsburg area. He said he centered its image around selling organic, locally sourced produce without trying to turn a large profit.

“I am a terrible businessman, you know, I will be the first one to say that,” Owen said. “It’s nice to have money, don’t get me wrong, but I always looked at money as being the byproduct of my actions, not the reason why I’m doing [them].”

And though money has not been his goal, Owen said he still believes The Daily Grind has been a “tremendously successful” business.

“I would rather have long-term customers than short-term profit,” Owen said.

Before the lease ends next year, the College will entertain bids for the space from any interested parties. At the end of this period, the College will review all the proposals and choose the one it considers best.

Robert Knowlten, the director of the Sadler Center and Campus Center, said that the expiring lease “hasn’t been discussed yet.”
Arnette, the owner of The Daily Grind, also said he has no definite plans for next year’s expiration date.

“I will cross that bridge when I get to it … it’s not on my short-term business plan horizon,” Arnette said.

And though neither Knowlten nor Arnette knows what will happen after The Daily Grind’s lease expires, they both acknowledge Owen’s role in nurturing the store into what it is today.

“Students have been drawn to The Grind in big numbers, and a lot of it is because of [Owen’s] personality and the way he treats people,” Knowlten said.“[Owen has] been running The Grind autonomously since he’s come on board so, clearly, I’m pleased with how everything has been going,” Arnette said. “Most people think that [Owen] actually owns The Grind, quite honestly. I’m quite pleased that that is the perception because for years, he has been the face of The Daily Grind.”

And after almost two decades working at The Daily Grind, Owen said he realizes that walking away from all his memories there will be difficult. Owen said that beyond working at the coffee shop, he had several memories where his workplace became a home for not only him, but his children.

“I raised my kids there,” Owen said. “My kids were tiny, and they’re all through college now, you know, and I homeschooled them in The Grind. I used [graduate] students to be their teachers so there’s a lot more than just a place called The Daily Grind sitting there. It’s my life.”

At the end of his career at The Daily Grind, Owen said he is optimistic about its future at the College and “seriously doubts” that the store’s time will end with his.

“I really try to work on being as humble as possible,” Owen said. “It’s not just me, it took a lot of people to make The Daily Grind work. I came up with a vision, but a vision is a seed — it’s not a plant. So you plant a seed and the nutrients are [the students], you know, the 18 years of student bodies that have come to The Grind have been the nutrients. The customer dictates to you what they want, and that’s what I wanted it to be.”