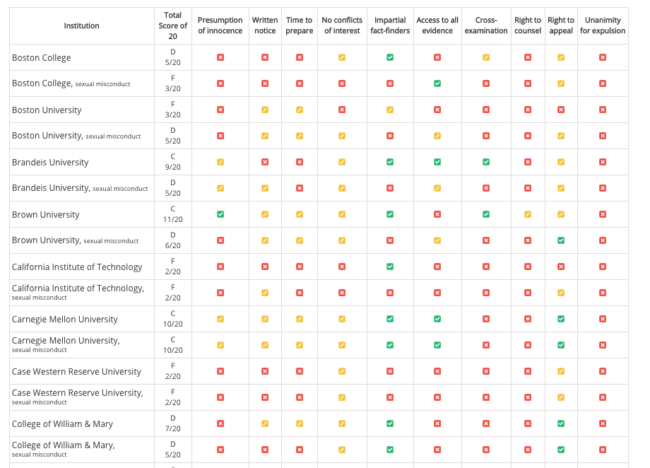 The Foundation for Individual Rights in Education, a nonprofit organization dedicated to protecting civil liberties on college campuses, awarded the College of William and Mary’s sexual misconduct policy a D rating in its Sept. 5 survey of due process at the nation’s 53 top universities.

FIRE defines due process as an individual’s right to fair, unbiased and equitable treatment during a judicial hearing. In the context of FIRE’s survey, a D or F rating indicates that a university fails to adequately provide the accused party with 10 due process safeguards (for example, the right to counsel and right to appeal).

Associate Dean of Students and Director of Student Conduct Dave Gilbert said he disagreed with the College’s rating, as well as FIRE’s criteria.

I would assert that the fact that the vast majority of the universities assessed were scored a D or F provides evidence that their rating system is out of the mainstream,” Gilbert said in an email.

“I would assert that the fact that the vast majority of the universities assessed were scored a D or F provides evidence that their rating system is out of the mainstream,” Gilbert said in an email.

The College uses an investigative model that aims to resolve sexual misconduct cases within 60 days of an initial report. If the College’s Title IX review team believes the report warrants further action, a group of investigators begins collecting evidence.

Once investigators have compiled a final report, the dean of students or an appointed designee reviews the evidence and determines if a policy violation has occurred. Disciplinary measures include probation, suspension and expulsion. The dean’s decision may be appealed to the provost by either the reporting party or the accused.

According to FIRE’s survey, the College’s sexual misconduct policy meets two of 10 listed criteria: use of impartial fact-finders and right to appeal. The College received a mixed mark for prohibition on conflicts of interests and zero credit for the presumption of innocence, written notice, time to prepare, access to all evidence, cross-examination, right to counsel and unanimity for expulsion.

Title IX Coordinator Kiersten Boyce said she believed FIRE’s general criteria were fair but questioned the accuracy of the group’s definitions and overall methodology. She noted that several safeguards –– written notice, time to prepare, no conflicts of interest, access to all evidence and right to counsel –– are detailed within the College’s sexual misconduct policy but were not acknowledged in FIRE’s survey.

Susan Kruth, FIRE’s senior program officer, said the survey did not credit institutions for overly ambiguous policies. For example, many colleges provide notice of a charge but fail to specify if the student will be told in writing which policies they violated and by what alleged actions, where and when the actions happened, and who was involved. The College’s policy states that notice will be sent by email or mail but does not specify the exact contents of the message.

“Institutions may be disappointed by their scores because they alluded to a safeguard but didn’t clearly enough guarantee it,” Kruth said in an email. “We’ve found that where policies can be read in a way that infringes on student rights, they are very often applied that way.”

Kruth particularly criticized the College’s single-investigator model, which allows the dean of students or a designee to determine an outcome based on the final investigation report. Kruth said that hearing evidence in-person is critical for sexual misconduct cases, as they often hinge on two parties’ conflicting testimonies.

Additionally, Kruth said that the College’s failure to explicitly state the presumption of innocence represents a fundamental due process oversight. Gilbert, in comparison, said that the College applies the standard of innocence implicitly — for example, accused students are generally allowed to remain enrolled during an investigation, and they have access to university resources throughout the process.

FIRE’s report arrives at a critical point in the nationwide debate over Title IX, the federal law that prohibits unequal treatment of the sexes in educational spaces and has long been associated with university sexual assault policies.

During a Sept. 7 speech at George Mason University, U.S. Secretary of Education Betsy DeVos announced plans to revise the government’s approach to campus sexual assault, which derives from the 2011 “Dear Colleague” letter, an unofficial but strict set of procedural guidelines.

The letter encourages colleges to rely on a preponderance of evidence — the College’s policy states that preponderance means it is more likely than not the misconduct occurred — allow accusers to appeal not-guilty findings and complete adjudications within a 60-day timeframe. FIRE opposes the “Dear Colleague” letter and is sponsoring a lawsuit challenging its legality.

“Survivors aren’t well served when they are re-traumatized with appeal after appeal because the failed system failed the accused, and no student should be forced to sue their way to due process,” DeVos said in the Sept. 7 speech.

Brendan McDonald ’18, head of outreach for 16(IX)3, a group dedicated to ending sexual violence in the College community, said that many of the concerns raised by DeVos and FIRE seem to be influenced by the criminal justice system — but, as Boyce explains, university investigations differ from criminal prosecution.

“We are addressing reports of violations of university policy,” Boyce said. “Due process in school conduct proceedings is not the same as due process in a criminal prosecution.”

Both Boyce and Gilbert said the College’s policy sufficiently protects the rights of accusers and accused; Gilbert added that the College exceeds the due process requirements required by law.

In our process, students receive notice of the matters being investigated and a meaningful and robust opportunity to respond, the fundamental tenets of due process,” Gilbert said.

“In our process, students receive notice of the matters being investigated and a meaningful and robust opportunity to respond, the fundamental tenets of due process,” Gilbert said. “There are many ways institutions can meet their due process obligations, and there is no one right way to meet them.”

Elizabeth Cascone, director of The Haven, a resource center for individuals affected by sexual violence, further explained that many aspects of the College’s investigation process, particularly the preponderance of evidence, are common in civil rights and student conduct cases.

Ensuring due process on college campuses is ultimately a balancing act between protecting the rights of the reporting party and the rights of the accused. Sexual misconduct cases are complex, emotionally-charged proceedings, and McDonald said that these circumstances often create a need to provide leniency for one party over the other.

“It’s better to be more supportive of the victim than the accuser in every situation,” McDonald said. “When only [about] five percent of all reported rapes are falsified, that just means … the victim is probably right.”