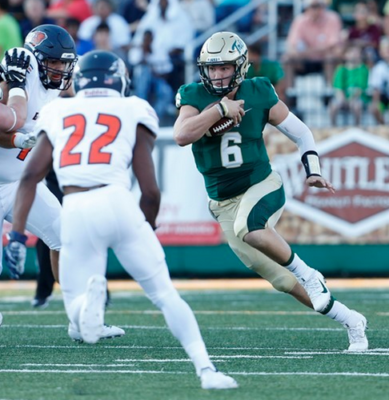 Saturday, William and Mary football ran away with its home opener over Bucknell with a 30-9 victory. The College moves into its bye week with two straight wins after a season-opening loss to the Atlantic Coast Conference’s Virginia Cavaliers. The Tribe has yet to lose to a Football Championship Subdivision (FCS) opponent, but there are still many questions to be answered and areas that must be improved before the Tribe kicks off its conference schedule Sept. 30 against Stony Brook.

The College benefitted from some timely plays on defense and special teams against the Bison that helped them to avoid falling behind early and to eventually extend the lead later in the game. In the middle of the second quarter, the Tribe was only leading 7-0 when its struggling offense was given a short field after an electrifying 48-yard punt return by sophomore wide receiver Jalen Christian. The College started that drive at the Bucknell 20-yard line. Even though the Tribe failed to move the ball much and did not capitalize with a touchdown, it was still able to finish the drive with a short field goal from sophomore kicker Kris Hooper, due to the brilliant special teams play that set the College up with a short field.

The Bison cut the lead to 10-9 going to the half, the Tribe clinging to the smallest of leads due to a blocked extra point after the Bison’s only touchdown of the first half. However, the Bison could have easily been ahead had it not been for those two big special teams plays and a typical solid performance from the Tribe defense. The College once again scored points due to defense and special teams in the third quarter. The Bison had the ball in a one-possession game, 16-9, when sophomore linebacker Nate Atkins sacked Bucknell quarterback Matt Muh and forced a fumble on the play. Sophomore safety Corey Parker scooped up the fumble and returned it 19 yards for a Tribe touchdown. The Bison never threatened to make the game close after this momentum-shifting play. The defense and special teams of the Tribe helped make up for an inconsistent offense Saturday. However, the offense may not always get this much help as the College moves into conference play.

The Tribe offense has certainly made significant strides since the beginning of the season just two short weeks ago. The College relied a lot on short passes and junior quarterback Tommy McKee’s ability to scramble in the first two games. The coaching staff had seemingly been hesitant to take any shots downfield and open up the playbook for the new starting quarterback. While McKee made several plays with his legs Saturday — finishing with 25 yards — he seemed more focused on getting the ball to his receivers.

The running backs for the Tribe stepped up in a big way, with freshman running back Nate Evans leading the way with 89 yards. This allowed McKee to focus more on passing. I was impressed with McKee’s ability to escape the pocket and still keep his eyes downfield looking for receivers until the last possible second, often finding an open man for a completion instead of running and taking a big hit from the defense.

In the second half, McKee took a couple of shots downfield, something that will be necessary if the Tribe is to have a chance of doing well in conference play. While some of these longer passes were incomplete, McKee also completed some of them or forced interference penalties on the Bison’s defensive secondary. On the Tribe’s last touchdown drive, McKee launched a deep pass intended for junior wide receiver Jack Armstrong and drew a 15-yard pass interference penalty, keeping the scoring drive moving.

One note of concern from the first two games was the Tribe’s punting situation. McKee had been handling the punting duties along with playing quarterback. This had arguably led to some short and wobbly punts because McKee was getting tired and beaten up while playing quarterback and then had to stay in to punt. This was setting up the Tribe’s opponents with better field position and putting more pressure on the College’s defense. Saturday, freshman punter Will Michael assumed the punting duties and did a good job. On his first punt of the game, he pinned the Bison inside their own 10-yard line and consistently launched 35- to 40-yard punts throughout the day. Hopefully Michael will continue to punt for the Tribe and allow McKee to focus on improving at the quarterback position.

I believe that the College has a chance to continue to be successful this season. If the Tribe plays well in conference play, it has a chance to return to the playoffs for the first time since 2015. However, the College must continue to improve by leaps and bounds each week for that dream to be realized. The defense must continue to be stellar — only giving up 15 points the past two games — in order to help an inexperienced but improving offense. While turnovers and big plays on special teams will be key for the Tribe, the offense must generate points for the College to have a chance to put up a good record in the Colonial Athletic Conference. McKee still only attempted 17 passes against Bucknell and threw for just 105 yards. He must continue to improve and develop more of a downfield passing game to supplement the much improved running game.

I would describe my expectations for conference play as cautiously optimistic. I think that this team can continue to improve and become a playoff-caliber team, but if the College does not improve in the aforementioned areas, it could result in another losing season. The team that we saw in the first three games will not be good enough to compete with the top teams in the CAA, but I believe that improvement is both possible and likely and that the Tribe will be competitive in CAA play.