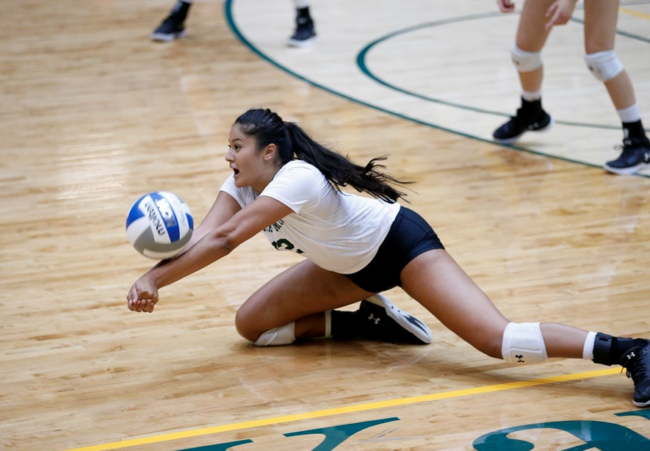 This weekend, William and Mary traveled to Tucson, Ariz. to compete in the Wildcat Classic. Despite its efforts, the Tribe (2-11) dropped all three matches, securing just a single set victory against Arizona.

Friday afternoon, the College fell 3-1 to Arizona (6-3), picking up its only set victory of the weekend. The Cats won the first set 25-21 after a lot of alternating between short burst runs.

There was a momentum shift in the second set despite Arizona stealing the first two points. The Tribe came back and took the lead 15-9 with a block by freshman middle hitter Taylor Heishman and senior hitter Sydney Biniak. Unable to hold on, the College let the Cats take off on a four-point run followed by three more consecutive points, tying the set 21-21. Despite the lapse in accurate play, the Tribe managed to come back and take the set 27-25 after nearly losing at 25-24 thanks to a kill by freshman hitter Kate Dedrick.

Like the previous set, Arizona started with a 2-0 lead. The third set was essentially back-and-forth play until the Cats took a 15-10 lead. Despite its efforts, the College was unable to come back from this deficit. A three-point run put Arizona up 20-13 and the Tribe could not keep up. The last College point of the set came from Biniak off an assist from sophomore setter Autumn Brenner. The Tribe dropped the third set 25-19.

The fourth and final set of the match began 3-0 in favor of the Cats. The Tribe occasionally managed to interject points between Arizona runs, mostly due to good hits by Dedrick, but the College ultimately fell 25-13 in the final set, handing the Cats the first win of the classic.

Biniak led the offense with 16 kills, followed by Dedrick with 13. Freshman middle hitter Julia Brown, Heishman and Biniak each contributed two blocks. Brenner contributed 40 out of 44 assists. The Tribe scored no service aces compared to two by Arizona.

The Tribe scored the first point of the set with a kill by Brown. The Redbirds retaliated with a six-point run broken up only by a service error by freshman opposite hitter Kendal Meier. The Tribe managed to close the gap to 12-9, but Illinois State took off on another long run with only a one-point attack error to break up the seven-point streak. The Tribe fell 25-14 after a final five-point run by the Redbirds.

Starting the second set with a 4-0 lead, the Tribe struggled to keep up with the Redbirds’ energy. Kills by Heishman and Biniak tied the game up 6-6 and the College held strong until Illinois State took a 13-10 lead. At this point, Illinois State scored the next 12 points with only two Tribe points interjected. One of the final two points was a block by Brown and Dedrick, the other an attack error by the opposing team. The College lost the second set 25-12.

The third and final set was by far the most competitive. Throughout constant back-and-forth scoring, the Tribe tied the score three times. The College went on two four-point runs, the most the College had seen against the Redbirds. One run was composed solely of alternating kills by Brown and junior hitter Heather Pippus. The College ultimately dropped a close contest 25-23.

The Redbirds nearly doubled the Tribe’s total points, 58-30; they also outplayed the College in service aces, 9-2, and blocks, 7-2. Biniak led the offense again with 12 points while Brenner contributed 24 of 25 assists. The Tribe’s two aces were from junior setter Katie Kemp and freshman back row Katie Turner.

Saturday afternoon, the College took on New Mexico State (7-5). The Aggies won all three sets, resulting in another 3-0 loss for the Tribe.

The first set was marked by the Tribe’s continuing trouble when it comes to stopping long runs. The College only took the lead once, 14-13, with a block by Pippus before igniting a four-point Aggie run in retaliation. The Tribe fell 25-19 on a service error by Brown, who also scored the College’s final point of the set on play prior.

New Mexico State got an early run on the Tribe, putting them up 3-1. The College managed to take the lead four separate times before inevitably dropping the set 25-22.

Despite the high-energy play the College showed in the second set, the Aggies came out with a 3-0 lead to start the third set. The Tribe did not manage to tie or take the lead once during the final set. Play from Pippus and Biniak dominated the set, giving the two a lot of touches. The College lost in a 25-12 final set.

No different from the rest of the weekend, Biniak led the Tribe offense with 12 kills; however, Pippus and Brown closely followed with 10 and nine, respectively. Biniak also contributed three blocks in addition to two each from Brown and Heishman. Brenner contributed 33 of 37 assists. Pippus dominated the defense with 13 digs.

The Tribe will return home this week to kick off conference play. The College will welcome Delaware to Kaplan Arena Sept. 21 in its first Colonial Athletic Association matchup of the season. This weekend, James Madison and Towson will take on the Tribe at home Sept. 23 and 24, respectively.