Home Opinions Columns Voting where your voice counts the most: registering in Williamsburg 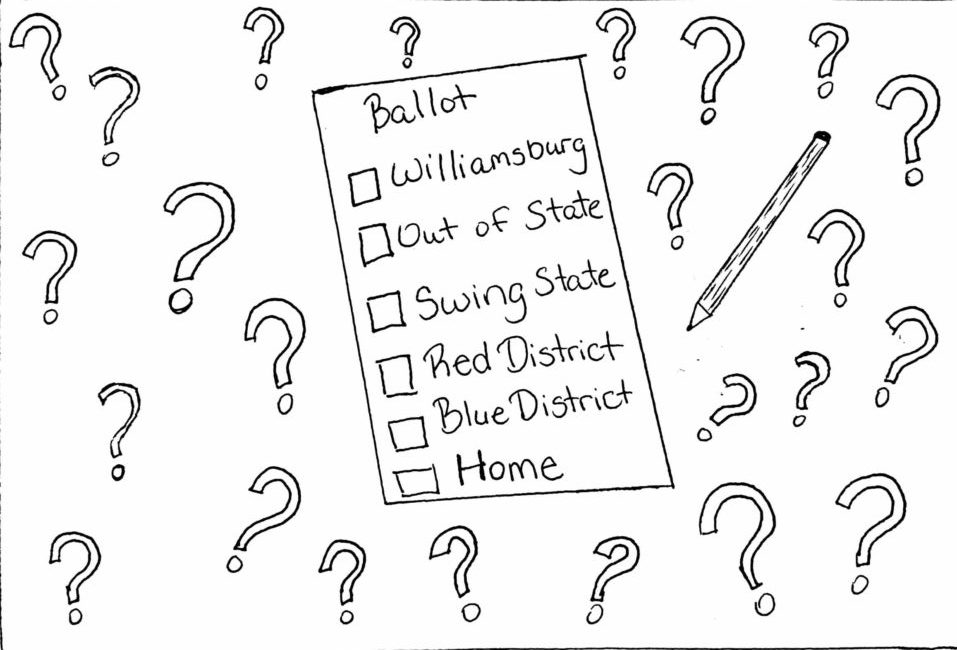 “Hi, are you registered to vote in Williamsburg?” I am sure that most students have been asked this question at some point at the College of William and Mary . While it may be frustrating to have to answer this question repeatedly, the student volunteers that are working to get people registered to vote are doing a commendable service. I was asked this question for the first time only a week into my freshman year at the College last fall. I was already registered to vote in Henrico, Va., my hometown, but I filled out the necessary paperwork to change my registration address to the City of Williamsburg. There are reasons to stay registered in your hometown as well, but I felt strongly about voting in Williamsburg.
My ideology is left of center and I have voted for all Democratic candidates in the three elections that I have been allowed to vote in since turning 18. I try to stay politically informed and involved and I am a member of Young Democrats on campus.

I am concerned by the current national and international political climates, but also believe that local government is tremendously impactful and sets the tone for government at higher levels.

I am concerned by the current national and international political climates, but also believe that local government is tremendously impactful and sets the tone for government at higher levels. Virginia has become a purple state over the last couple decades, meaning that there is relatively equal support for both the Republican and Democratic parties statewide. Despite this, the Virginia House of Delegates is currently comprised of 66 Republicans compared to only 34 Democrats. One reason for this discrepancy is gerrymandering, the practice where uneven and nonsensical district lines are drawn to favor a certain party. Unfortunately for me, the local elections in my hometown are usually won by Republicans, partly due to this deplorable practice. The 93rd district in Williamsburg is one of the few districts across the state that has consistently competitive House of Delegates campaigns. I want my vote to matter in important local elections. The competitiveness of campaigns in this district leads me to want to vote in Williamsburg. Just last November, my vote helped to elect State Senator Monty Mason in the 1st district and Delegate Mike Mullin the 93rd district. I truly felt that my vote mattered and that those two candidates have represented my interests in local government.
Furthermore, I moved onto campus barely over a year ago, but I consider this to be my home. I care about the people on campus and have formed close bonds with many unique and fantastic people. I also have fond memories of and truly believe in the mission of Colonial Williamsburg. I have been to events, restaurants and stores all around Williamsburg and care deeply about the well-being of my campus, the city and the surrounding areas. Policies in local government directly impact these areas and I want to do my best to put people in office that have similar values to me and will help to preserve and strengthen this wonderful area.
I also have many opportunities to meet and campaign for local politicians on campus. I feel a personal bond with the local candidates in Williamsburg because of the opportunities that the College and Young Democrats provide to meet and support local politicians. I have heard Mullin and Mason speak on multiple occasions and hope to assist in Mullin’s campaign through phone banks and canvasses this fall.
I understand that some people have a strong connection with their hometowns and do not want to sacrifice their votes there to vote in Williamsburg or that elections in their hometowns are competitive, and that is completely acceptable. As long as you are voting somewhere, you are making your voice heard. However, I personally feel that I have the best opportunity to make a difference here in Williamsburg, a place that I love, and therefore I made the decision to change my voter registration to Williamsburg.
Email Kevin Richeson at kmricheson@email.wm.edu.