Home Opinions Columns Living in a Language House: a sense of community 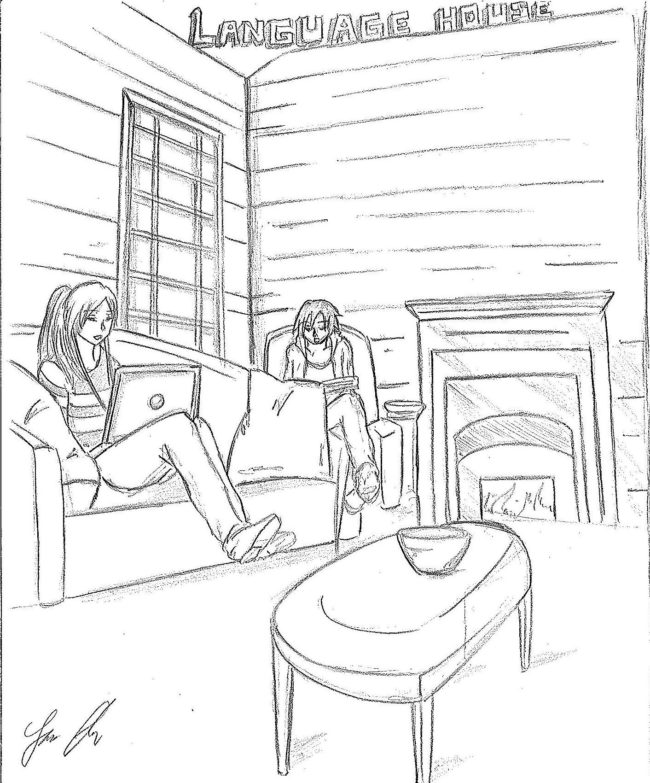 After searching rather languidly for off-campus housing last year, I finally gave up, unsatisfied with apartment offerings. I had stayed in two traditional dormitories previously and was acutely aware of the drawbacks.

In a traditional dormitory, it’s hard to get to know your hall mates on any deep level. Schedules often conflict and the out-of-the-way location of the common areas prevent any real sense of community from growing. The residential assistants do an admirable job of combatting the isolation effect, but the order is a tall one.

My experience with the Language Houses began with a friend who had lived in the Japanese House for two years. Whereas the halls of my old dorm often felt vacant and lifeless, the “J-House” exuded a wonderful sense of excitement and sociability.

I remember walking into the lounge once — the first room you walk into upon entering — and seeing two girls cooking something in the kitchen, a group of guys playing video games on the TV and a small study group sitting at the bright wooden table just behind the sofa. Had I been feeling more proactive, the scene of such a lively community would have necessitated my immediate application for Language Housing.

I was studying French, so it would have made sense to live in the French House and work on the language further. However, at the time I still had delusions of off-campus housing. By the time I gave up on that in the heat of summer about a month before fall semester, that option, and most every other housing option, was closed to me.

The only real option, after contacting housing services in a state of minor panic, was to live in the German Language House. My only connection to Germany was through my sister who stayed in Austria for a year. She became fluent in the Austrian dialect and gave me and my family an excuse to fly there one summer — a tenuous connection at best.

In a traditional dormitory, it’s hard to get to know your hall mates on any deep level.

Not knowing exactly what to expect but having the experience of the J-House still in working memory and facing the alternative of homelessness, I decided to sign up for the German House.

The Language Houses at the College of William and Mary are not like residential dormitories. From the enriching cultural experience offered by native tutors to the communal atmosphere, they offer something much more than traditional dorms.

I didn’t choose to live in a Language House…. And yet, looking back, it was the best year I’ve had at William and Mary.

First off, each house is arranged around their own personal communal areas: the kitchen, the lounge (equipped with TV and sofas), and a dining room of sorts, which usually gets used alternatively for studying. The rooms are located to either side of these in groups of three or four per alcove.

The Language Houses offer a significant improvement over dormitories like DuPont or Old Dominion in that their common areas, by virtue of their central location, actually fulfill their intended purpose — namely, the promotion of community and building of relationships. The effect of this change was evident within the first month of my stay at the German House.

To get to your room, you had to go through the common areas, which meant seeing friends, which meant having conversations, which meant building a community. These are things which don’t happen in the other dormitories in which I’ve lived. Over the course of the year, you get to know your housemates on a much deeper level than traditional hall mates.

On top of the increased sense of community, you have the amazing resource of a language tutor. Of course, if your goal is to learn or sharpen a new language, the ability to talk with a native speaker is invaluable. But apart from language, these are people who, through their unique outlook on life and their life experiences, offer wonderful conversation.

I found myself talking to Kim, the German tutor, not to practice my German — although I did periodically ask for phrases — but rather to enjoy the company of someone from which I had so much to learn. Talking with people from different backgrounds is a great way to educate yourself. Knowledge is experience and you gain it through forging your own as well as uncovering someone else’s through books and conversation.

Kim talked to me about politics in Germany at the time — the rise of the far right. Because it was her country, she spoke differently about it. She helped me understand things on a deeper level — a level impossible for foreign correspondents to emulate in news articles.

We also talked about life. She often mentioned how anxious the average student was here compared to where she grew up. This wasn’t the only college she’d experienced, so she could offer that precious outside perspective and give a reality check whenever we needed it.

I didn’t choose to live in a Language House. I lived there because I had no other options. And yet, looking back, it was the best year I’ve had at William and Mary.

I could write a short novel about all the incredible things I experienced and all the new people I met. Anyone remotely interested in Language Housing should apply. I truly believe the experience is far superior to a traditional dorm.