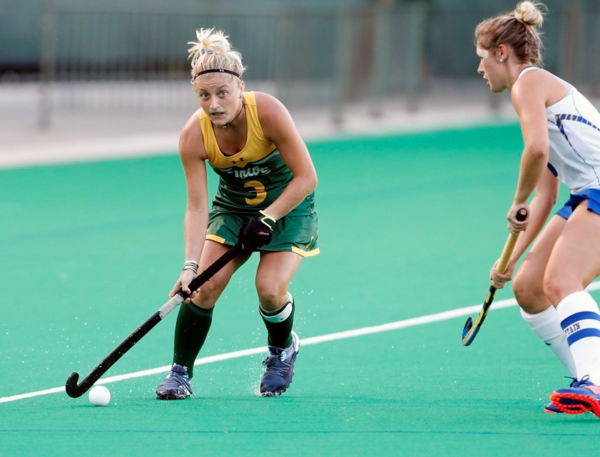 William and Mary squared off against two Colonial Athletic Association opponents for the Tribe’s first conference matches of the season after a challenging non-conference schedule. The Tribe got off to a fast start, scoring early and often against Hofstra Friday en route to a 5-0 shutout victory. The College finished out the weekend with a hard-fought 3-1 win over Northeastern.

Friday, the College (7-4, 1-0 CAA) wasted no time in taking the lead against the Pride (5-7, 0-1 CAA). Senior midfielder Emma MacLeod blasted a shot past Hofstra goaltender Carys Swan to give the College a 1-0 lead before three minutes had ticked off the clock in the match. Senior forward Cammie Lloyd assisted on MacLeod’s goal. About 10 minutes later, the Tribe capitalized on sustained pressure on the Huskies’ defense. Lloyd got a goal of her own off an assist by junior midfielder Jenna Cutilli, putting the Tribe in front 2-0, a score that held up until halftime.

The College held the Pride to just one shot on goal during the match, while the Tribe manufactured 18 shots on goal. The second half was dominated by the College, as it added three more goals to carry the Tribe to a 5-0 victory. All three second half goals were scored by MacLeod, giving her four goals on the night.

“It was just the start of CAA,” MacLeod said. “We all played really well as a team. I just happened to be there.”

Sunday, the Tribe took the lead against Northeastern just over a minute into the match when sophomore defender Christie van de Kamp made a run down the left side and passed the ball to sophomore forward Cata Days. Days passed it back to van de Kamp, who darted toward the middle of the field and fired a high shot past the reach of the Huskies goaltender for an early goal, giving the Tribe a 1-0 advantage.

The Huskies had the only penalty corner of the first half very early on in the game. However, the Tribe successfully defended the corner and cleared the ball away from the goal to avoid giving the Huskies a chance to tie the match at one.

The Tribe doubled its lead with just under 27 minutes remaining in the first half when sophomore Woodard Hooper got the ball around midfield. She dribbled all the way down the field, weaving past multiple defenders before getting off a bad-angle shot that skidded past the goaltender and into the corner of the goal.

“I said to the team, ‘if you drop your guard on this team, they are going to control it,’” head coach Tess Ellis said.

This made the Tribe’s fast start extremely important, because it allowed the College to play with the lead.

The next 20 minutes of the match were fairly uneventful, as the Huskies were unable to put much pressure on the Tribe defense. In the final minute of the first half, Northeastern fired a shot on goal. Tribe sophomore goalkeeper Morgan Connor used her pad to block the shot and direct it away from the goal, maintaining the College’s 2-0 lead. The first half buzzer sounded less than a minute later and the Tribe went to the half with a 2-0 advantage over the Huskies.

The Huskies had the first chance of the second half and converted it for a goal to cut the Tribe’s lead in half. Northwestern forward Jamie Bartucca hit a shot past Connor and into the corner of the goal. The College held a 2-1 lead with 29 minutes remaining.

The Tribe got its first penalty corner of the match a few minutes later, but was unable to add to its lead after a couple minutes of intense offense pressure on the Huskies’ defense. With just under 20 minutes left, the Huskies got a penalty corner of their own, looking to find an equalizing goal and put the pressure back on the College. However, the Tribe defense managed to prevent the Huskies from tying the match with the help of a save by Connor.

With less than nine minutes left in the match, Hooper jammed home a shot into the left side of the net to put the match out of reach for the Huskies. The Tribe held onto its 3-1 lead for the remainder of the match and claimed its third victory in a row.

“We went up 2-0 but we knew they were going to come back strong and they did,” Hooper said. “It was just a complete team effort to get that last goal to secure the win.”

Friday, the College will continue CAA play on the road against Towson. The Tribe will look to stay undefeated in conference play and extend its winning streak to four matches before returning home next Sunday afternoon to battle Davidson in a non-conference match.

“The ultimate goal for us would be to win all games and host [the conference tournament] here at William and Mary,” Ellis said.