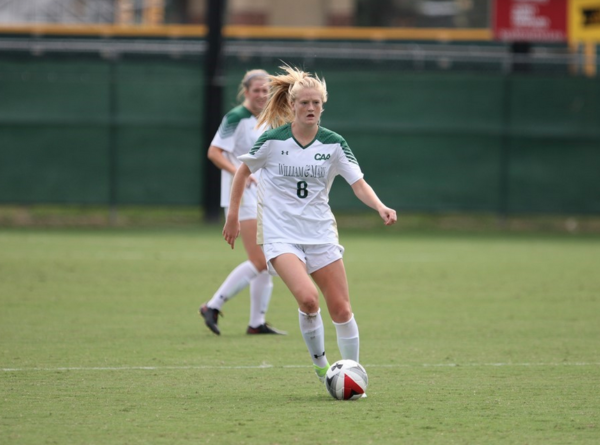 Sunday, William and Mary welcomed Hofstra to Martin Family Stadium for another Colonial Athletic Association matchup. This 3-1 defeat marked the Tribe’s eighth loss in a row, broken up only by a 0-0 tie against the College of Charleston Thursday.

“At least we got one,” Segan said. “It was nice to get one to just kind of lift our spirits up near the end and just give us another good battle to finish off the game.”

Hofstra took the lead early with a goal by midfielder Lucy Porter late in the third minute of the contest. The Pride scored again in the 32nd minute with a goal by forward Kristin Desmond. The Tribe made only one attempt between the two Hofstra goals, a shot taken by Segan in the 30th minute that was blocked before reaching the goal.

“We’ve got players who can play soccer, but because of this run we’re on, they snatch at the decisions and end up making poor decisions,” head coach John Daly said. “It’s been pretty frustrating because they’re capable of performing at a higher level.”

Freshman forward Courtney Miles came in hot at the end of the first period with two consecutive shots on goal in the 42nd minute. Despite the effort, the first shot was blocked and the second saved by Borresen. The final attempt of the period was made by senior midfielder Haley Kent with a shot in the 44th minute, but the shot was also blocked.

Dominating the Tribe’s offense, Segan went in for another shot in the 52nd minute, but the shot ended just wide of the goal. Hofstra forward Jenn Buoncore scored Hofstra’s third and final goal of the match in the 54th minute, her first goal of the season.

A header shot by senior midfielder Rachel Moore was blocked late in the 56th minute; Moore was subbed out in the 59th minute. The following 24 minutes were relatively uneventful, with both teams unable to follow through on any shot. In the 83rd minute, Segan scored the Tribe’s one and only goal. The match ended 3-1 in favor of the Pride.

The Tribe looks to break its losing streak in conference play, hitting the road Thursday to take on Elon. The College will return home Sunday to host a CAA battle against Delaware at 2 p.m. at Martin Family Stadium.

“Every day we work hard,” Daly said. “Every day we practice the kind of things we want to do in games, but you can’t replicate the game itself.”