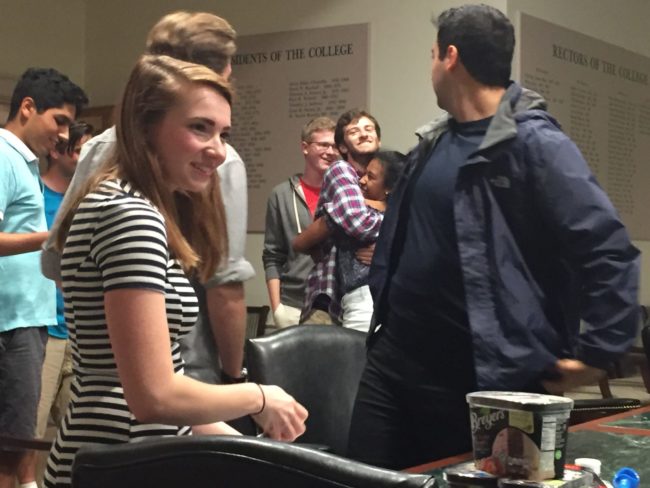 Monday, Oct. 9, 932 members of the class of 2021 voted for their class president and four Student Assembly senators. David DeMarco ’21 was elected for the position of class of 2021 president.

Me and my team of friends, we all worked really, really hard,” DeMarco said.

“Me and my team of friends, we all worked really, really hard,” DeMarco said. “I’m just really excited that everyone thinks that my ideas and our ideas are going to make William and Mary better, and I really look forward to working with the entire Student Assembly.”

These four senators were elected out of 11 total contenders for the positions.

The senate candidate coming in fifth place was Stephanie Lodico ’21, who did not earn a seat in the senate, taking 9.45 percent of the vote, for a total of 322 votes.

Two candidates for class president, Basel Osman ’21 and Brighten Meade ’21, failed to submit their campaign expense reports to the Elections Commission by the mandated time, so their candidacies were invalidated. Another class president candidate, Macy Calder ’21, committed a class one elections violation by hanging two flyers on one bulletin board, but will not be fined for this violation.

Welcoming the new members to SA Senate were members of the Elections Commission, chaired by Mallory Powers ’18, as well as SA executive representatives, class presidents and senators. SA President Elijah Levine ’18 and SA Vice President Annelise Yackow ’18 were in attendance at the celebration.

Levine said that he was excited that the first year using TribeLink to vote went well.

I’m excited, obviously because we have new voices in the senate,” Levine said.

“I’m excited, obviously because we have new voices in the senate,” Levine said. “I was initially concerned about how the first round of TribeLink voting was going to go — it definitely worked well. To the extent that I kept up with it, people ran very energetic and well thought through campaigns, and I think that’s going to reflect very well on their class and on what we can do together for the College.”

Vita, who was also in attendance, said she was excited to see new members in the senate.

“I’m just so beyond excited to have new voices in the Student Assembly,” Vita said. “So many freshmen ran amazing campaigns, and I’m looking forward to seeing what they can accomplish this year.”