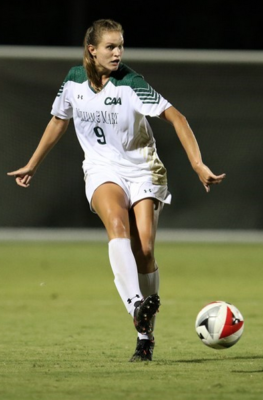 Redshirt sophomore forward Sarah Segan carried William and Mary in Colonial Athletic Association play this week. Segan scored the tying goal in the final minute against Elon in a 2-2 decision and netted the game-winner in double overtime against Delaware to secure her team a 2-1 victory.

Thursday, the Tribe (5-8-2, 1-3-2 CAA) played a closely-contested game on the road against Elon. The Phoenix (8-4-4, 1-2-3 CAA) appeared to take control on their home turf early, as Elon forward Meredith Christopher delivered a clean pass to midfielder Reena Wichmann, who calmly placed the ball in the bottom left corner from inside the box in the 29th minute. The remainder of the first half played out with several chances for each side, but no more goals, as Elon took a 1-0 lead to the locker room.

Just six minutes into the second half, the Tribe tied the game at one. Senior defender Elysse Branton made a strong individual run down the center of the field, ultimately finding senior forward Sami Grasso, who was cutting down the left sideline. Grasso collected the pass, moved inside and sent the ball across the field into the bottom right corner of the net. This tied the game at one and gave the College some life.

In the 63rd minute, the Phoenix regained the lead. Christopher again found herself with the ball in the box, maneuvered to get separation from defenders and launched a shot that bounced off the post and into the goal, giving Elon a 2-1 advantage.

The Tribe showed resilience, fighting until the final whistle. This effort was rewarded when Branton was tackled illegally in the box and the official awarded the Tribe a penalty kick. Segan delivered, knotting the score at two in the 90th minute and forcing overtime.

In the 98th minute, Christopher nearly found the back of the net again, but saw her one-on-one opportunity saved by Tribe redshirt senior goalkeeper Grace Smith.

In the second overtime period, the College nearly found the game winner, but a pair of shots from senior back Haley Kent and classmate midfielder Rachel Moore was saved.

The contest ended in a 2-2 tie; each side finished with 17 shots, demonstrating the competitiveness of the match. The Tribe managed eight shots on goal to just five for the Phoenix.

Moore led the College with six shots, two on goal, while Segan put three of her four shot attempts on target. Smith finished with three saves in net.

Sunday, the Tribe returned home, desperate for its first CAA win against Delaware (5-8-2, 2-4 CAA). Playing behind a home crowd, the College attacked from the start, and was nearly instantly rewarded when Segan scored in the second minute. Junior back Claire Robbins sent an aerial pass to Moore, who collected it to the left of the net and centered it past the goalkeeper to Segan, who calmly passed the ball into the net for a 1-0 lead.

The College continued to dominate the match for almost 70 straight minutes following the goal, with many opportunities to increase the lead to two, but was unable to find the back of the net.

In the 72nd minute, it appeared that the Blue Hens would foil the Tribe’s attempt for its first CAA win of the season, as defender Andrea Gunderson curved in a corner kick to net the score at 1-1.

Despite a difficult late goal, the Tribe kept the pressure on, but regulation ended with the score still deadlocked at one.

In the first overtime period, the College took four shots while the Blue Hens managed none, but the score remained 1-1. In the 102nd minute, Kent pressured a Delaware defender and forced a turnover. Maintaining possession of the ball, she found Segan, who gathered and unleashed a perfectly placed shot into the upper left corner to give the Tribe a 2-1 victory.

For the game, the College finished with 17 shots to just six for the Blue Hens.

This coming weekend, the Tribe will finish its regular season slate with road games Thursday at UNC-Wilmington and Sunday at Northeastern.