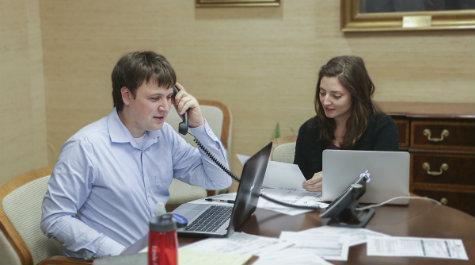 For many, Tuesday’s gubernatorial elections in Virginia and New Jersey will mark the most major of political events after U.S. President Donald Trump was elected a year ago. For non-partisan support, VoteLine, a telephone hotline run by students at the College of William and Mary’s Marshall-Wythe School of Law’s Election Law Society, is working to ease qualms as to how to arrive at the polls, make voting plans and understand the importance of the election.

Such is the mission of VoteLine, which is funded by the Student Bar Association. Election Law Society Co-President Aaron Barden J.D. ’19 said that VoteLine aided approximately 20-30 people, most of whom were middle-aged voters. Barden said that given the lower turnouts of non-presidential elections, especially in an off-year, this number is significant and will most likely increase.

Barden said that there is one case of him helping a voter that stands out in his mind.

“Last year, I walked a voter through Google Maps directions to his voting precinct over the phone because he lacked the resources to find it himself,” Barden said in an email. “That is one voter who might not have voted, but did vote due to the VoteLine.”

Because of student voters, Barden then created a Twitter account so that students could have their questions answered.

“I believe it’s a pretty thin race and it’s gotten very gnarly,” Co-Coordinator of VoteLine Alannah Shubrick J.D. ’19 said. “And I think it’s a time when confidence in elections is generally very low.”

The gubernatorial race, which is at the top of the ballot for Virginians, has three candidates: Republican Ed Gillespie, Democrat and former Lieutenant Governor Ralph Northam and Libertarian Cliff Hyra. According to Shubrick and Barden, it is important for voters to study the candidates’ policies before voting.

VoteLine Co-Coordinator Matthew Catron J.D. ’20 said that, compared to the office of president, he believes the office of governor has more day-to-day impact on citizens’ lives.

“Strangely enough, governors tend to have a lot more direct impact on people within the state’s lives,” Catron said.

According to Catron, some of the issues that will impact voters include taxation and education. Additionally, one issue close to the College is that the governor appoints the Board of Visitors[K1] . One of the largest issues Shubrick and Catron expect to clarify on the hotline is Virginia’s new photo ID laws, which have stiffened in recent years.

“There are processes to get voter IDs even on Election Day that would work for the election,” Shubrick said.

They explained that votes can also be held until voters produce identification later, but before votes are tallied. Shubrick and Catron said that this information, which the public may not know, is something that VoteLine can make accessible. They believe that this helps encourage citizens who might have previously thought that their identification is faulty to vote.

“[Voting] is a kind of a difficult process if you think about it, especially just for somebody who works a 40-plus-hour-a-week job,” Catron said.

Barden said that one of the reasons the law school hosts the hotline is because it believes that it is important to enfranchise as many voters as possible.

Voters are provided relatively few opportunities to ask questions on Election Day, and we believe that the VoteLine truly allows us to enfranchise a set of voters that may otherwise be barred from the polls simply due to a lack of information,” Barden said in an email.

“Voters are provided relatively few opportunities to ask questions on Election Day, and we believe that the VoteLine truly allows us to enfranchise a set of voters that may otherwise be barred from the polls simply due to a lack of information,” Barden said in an email.

According to Shubrick, election laws can sometimes be difficult to understand and might hinder citizens from turning out to vote. She said that because it is possible that voters do not have time to research election law, VoteLine works to provide voters with information about election law, so that they can feel prepared to vote without having formal political education. Catron said that another thing that is important about VoteLine is that it is not a service limited to residents of Williamsburg.

“We try to advertise as far across Virginia as we could,” Catron said. “[We advertise] north, south, east and west.”

Catron said that this hotline is significant because it works on a case-by-case basis. The workers at VoteLine believe that even if they help one person to vote, that would be enough. Shubrick said that she agreed with this.

“I think it’s a great exercise, that you can facilitate change or improvement and, if something seems unmanageable, especially in this sphere, to do it on a smaller scale, or an individual scale and actually know that you affecting a positive result or a positive outcome,” Shubrick said.