Home Sports Games Football: The College remains winless in the CAA with one game remaining 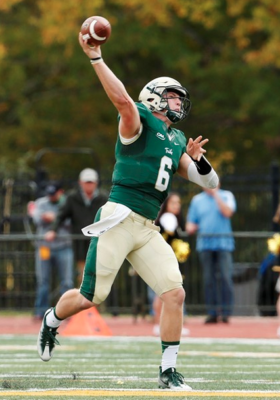 Saturday, William and Mary welcomed Towson to Zable Stadium for its Senior Day and final home game of the season. Still looking for a win in Colonial Athletic Association play, the Tribe (2-8, 0-7 CAA) held strong against the Tigers (3-7, 2-5 CAA). The College ultimately fell 26-14 to Towson, remaining winless in conference play.

The College started junior quarterback Tommy McKee. Towson scored early on, putting the Tigers up 6-0 with 10:52 left in the first quarter. The kick attempt was blocked by sophomore defensive tackle Bill Murray. Two minutes later, Towson returned the ball 62 yards for its second touchdown. The Tribe continued to pressure the Tigers, scoring a touchdown on a pass to freshman tight end Nick Muse from McKee. This marked Muse’s first career touchdown.

“Their defense just made it tough for us to move,” McKee said. “We tried to run the ball, they’d pressure, they’d bring more guys than we could block.”

With 4:49 left in the first quarter, the Tribe trailed 12-7. On Towson’s next possession, a pass by quarterback Ryan Stover was intercepted by senior cornerback Aaron Swinton. The first quarter came to a close with the Tribe on the Towson 15-yard line.

“It’s kind of the story of two halves, really,” head coach Jimmye Laycock ’70 said. “I thought other than the way we started with the mistakes there with the fumble and the punt, I was really pleased. We kind of settled down and played pretty well the rest of the first half after that … all of a sudden in the second half we fell out of rhythm.”

Towson started with the ball in the second half. Despite each team having over 100 passing yards, neither scored in the third quarter. For the Tribe, junior wide receiver Jack Armstrong and senior wide receiver Daniel Kuzjak contributed 35 and 26 yards, respectively.

Running back Kobe Young scored for Towson, putting the Tigers up 19-14 with 13:32 remaining in the fourth quarter. On the College’s next possession, McKee threw an interception into the hands of cornerback Jamal Watson at the Tribe 49-yard line. Watson returned the ball 47 yards and Stover rushed the ball the final two yards for a Towson touchdown. The Tribe trailed 26-14 with 12:20 left in the half.

Despite holding its lead for the first half of the game, the College was unable to carry that energy and communication into the second half, costing it the game.

“That is football; a game of adjustments,” McKee said. “A game of seeing what they’re doing and adjusting and calling plays to be successful with that. We were calling successful plays in the first half and executing them. In the second half, they called successful plays against us … we didn’t match that intensity; therefore, our execution went downhill from there.”

The Tribe had 148 rushing yards compared to Towson’s 98. Each team had one interception in the books, as well as three sacks. McKee completed 18 passes to Stover’s 13. The Tigers scored 13 points off turnovers, while the Tribe scored zero.

The Tribe will travel to Richmond Nov. 18 for its final regular-season contest. This will be the College’s final chance to break its seven-game losing streak and obtain a single conference win.