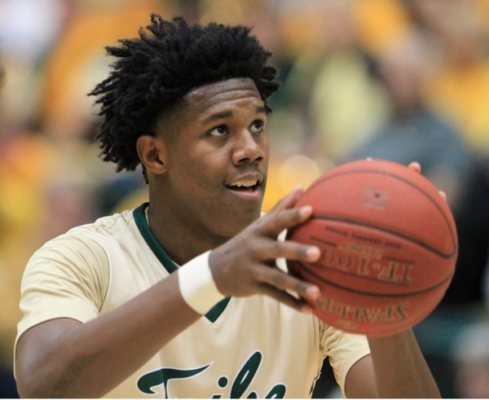 The Panthers (1-0) shot 60.7 percent from the field, the highest field goal percentage an opposing team has recorded against the College since 2014. After the game, head coach Tony Shaver expressed disappointment in the effort on defense.

The Tribe shot well to start the game, making six of its first eight field goal attempts. Senior guard David Cohn played a key role as the College took an early 15-12 lead into the first media timeout, scoring the Tribe’s first five points and assisting on three other baskets.

However, on the other side of the court, High Point was also enjoying a strong start, the Panthers nailing nine of their first 10 shots. The Tribe’s advantage quickly disappeared, High Point going on a 14-1 run following the first media timeout and storming ahead 26-16 with 11 minutes, 38 seconds left in the first half, forcing Shaver to call a 30-second timeout.

The Panthers kept the College at bay the rest of the half, the lead never dipping below six points. High Point entered the halftime break ahead 51-39, guards Andre Fox and Jahaad Procter pacing the Panthers with 20 and 16 first-half points, respectively. The Tribe had failed to keep up its strong offensive start, going 11-30 from the field in the opening 20 minutes, including a woeful 3-16 from three-point range. Sophomore guard/forward Justin Pierce was one of the few positives for the College in the first half, scoring 11 of his team-high 18 points on 4-7 shooting in his first collegiate start.

“He played well at times, I think it was a bright spot for him as a young sophomore,” Shaver said to Tribe Athletics regarding Pierce’s performance. “Lot of areas he can get better at, but he was one of the guys who showed a little bit of toughness out there tonight.”

The Tribe’s deficit continued to grow as the game progressed into the second half. High Point opened the period with a quick 7-0 run, forcing another Shaver timeout, the Panthers seemingly scoring at will. The College did not help its cause with 10 second-half turnovers, which resulted in 16 High Point points.

The Tribe ultimately never found a way to get back into the game, High Point reaching the century mark and claiming an impressive 100-66 win. Procter led all scorers with 28 points, drilling six of seven three-point attempts; Fox was not far behind with 22 points of his own. Pierce and sophomore forward Nathan Knight were the only College players to finish in double-figures, Knight tallying 15 points, 11 of them coming from the free-throw line. The Tribe finished with a 37.7 field goal percentage and made just five of 22 attempts from beyond the arc, far inferior to the strong shooting of the Panthers.

“I’m surprised we played the way we did tonight, we’ve been practicing well,” Shaver said to Tribe Athletics. “Some of the things we saw that were weaknesses tonight we’ve been concerned about: lack of toughness, lack of size. We’ve really been addressing those things, but clearly in the next four days we’ve got to make advancement in those areas.”

The College will try and notch its first win of the season Wednesday as it takes on Hampton in its home opener at Kaplan Arena. Tip-off is scheduled for 7 p.m.