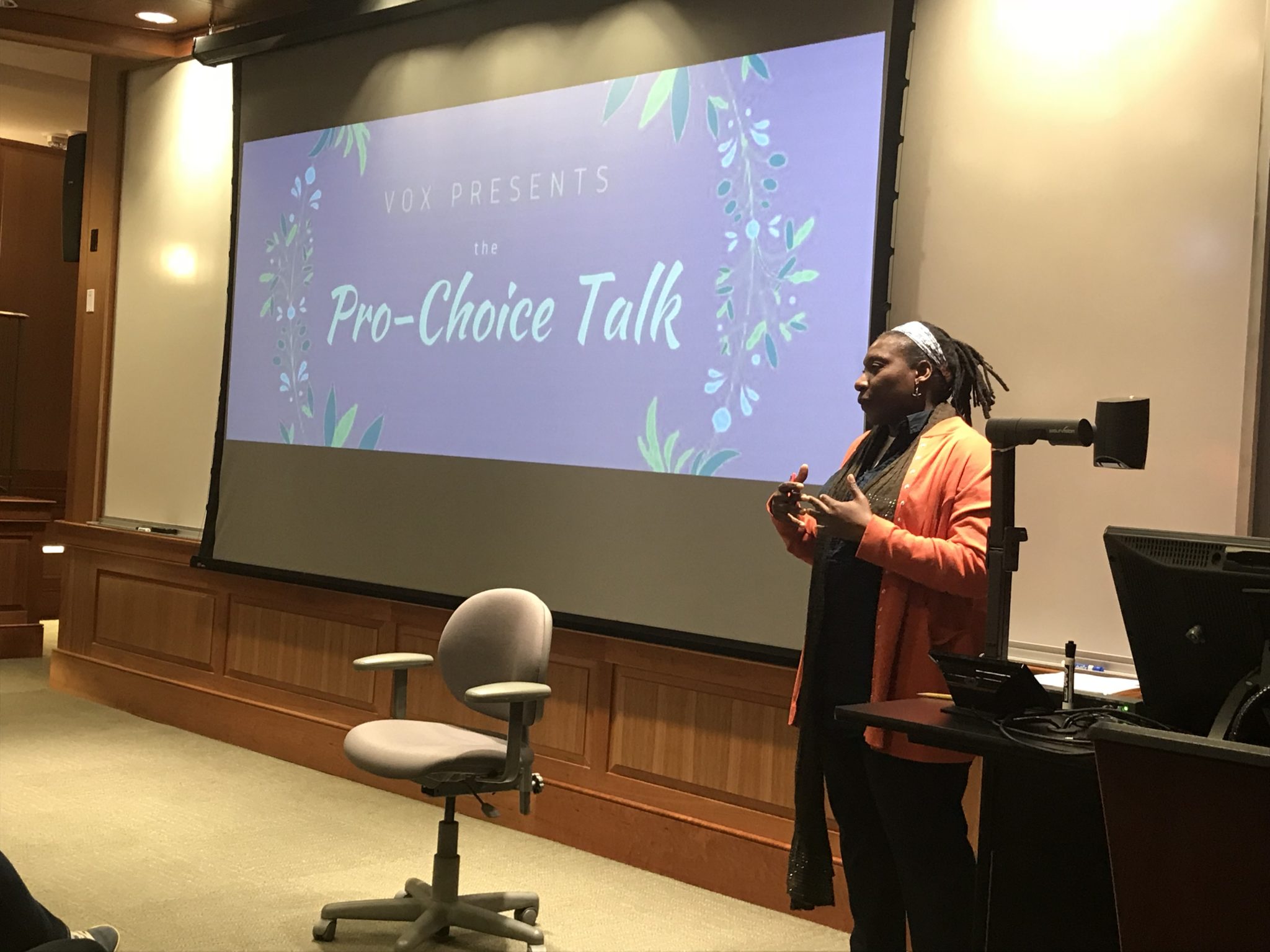 VOX: Voices for Planned Parenthood held its annual “Pro-Choice Talk” Dec. 1 to discuss what it means to be pro-abortion rights. The panel, comprised of seven students and professors from the government, kinesiology and Hispanic studies departments, shared personal and academic perspectives on reproductive rights.

For speaker Paulina Farley-Kuzmina ’20, the discussion of abortion rights was not in the abstract. Earlier in the fall 2017 semester, Kuzmina had an abortion, and the pro-abortion rights talk was the first time she spoke publicly about her experience.

“I felt that sharing my story at the pro-choice talk was appropriate because even if I could touch one person, or one person heard through word of mouth that there was one person who had an abortion, or who was pregnant and made it through, that that would make the difference,” Farley-Kuzmina said. “That would have made the difference for me.”

In her speech, Farley-Kuzmina discussed the state regulations she worked through to receive her abortion.

Virginia state law requires individuals to wait 24 hours before having an abortion if they have traveled to a clinic within 100 miles of their residence.

Farley-Kuzmina traveled 123 miles to Charlottesville, Virginia, to waive the law. However, since Farley-Kuzmina lived in a residence hall and had no government-issued proof of residence in Williamsburg, she used her driver’s license, which showed her permanent address in Northern Virginia. With that address, she was 101 miles from the clinic.

“It just freaks me out that if my parents had bought the house down the street, I wouldn’t have been able to get that abortion,” Farley-Kuzmina said. “You can learn about the laws restricting abortion, but it’s very different when you have to hurdle them.”

Farley-Kuzmina said she used her experiences to send a clear message to the audience: People should do more than retweet their support of the pro-abortion rights movement.

She said she wants to see greater activism among those in attendance and greater support for women after their procedures.

“Caring about reproductive rights enough and only waiting to engage in political activism until it affects you directly is really dangerous,” Farley-Kuzmina said. “I urge you to not play that game.”

“The real importance of doing something like a pro-choice speak out is to provide the space, so we can create solidarity that counters the notion of shame,” McKinney said.

McKinney said that a woman’s ability to make decisions regarding her reproductive rights demonstrates a greater exercise of political decision-making power as citizens.

Kinesiology professor Iyabo Obasanjo continued the discussion of the importance of female political decision-making and leadership, but from a public health standpoint. She said studies have shown that female leaders create better health outcomes for other women.

We bring our lives into leadership, which is the reason why we want diverse leadership, so that diverse backgrounds can get into positions of opportunity to be able to have an impact on people,” Obasanjo said.

“We bring our lives into leadership, which is the reason why we want diverse leadership, so that diverse backgrounds can get into positions of opportunity to be able to have an impact on people,” Obasanjo said.

Raised in Nigeria as the daughter of former President Olusegun Obasanjo, Obasanjo said seeing poverty in her country reaffirmed her pro-abortion rights stance, since she said women should be able to control their family planning. Continuing her research in the United States, Obasanjo fears that high maternal mortality rates will continue to rise in the United States as abortion laws become stricter.

“Countries that have really strict abortion laws have high maternal mortality because abortion care is part of maternal health,” Obasanjo said. “Once you start to untie it, you start to have problems.”

“I really liked the diverse perspectives offered and that the talk didn’t shy away from religion, as it very much hits at the cornerstone of this pro-choice, pro-life dichotomy,” Grady said. “I think the emphasis on personal experiences was really important and made me happier to be involved in [the] William and Mary community and more supportive of young women and pro-choice people on campus.”

It was that same sense of support that made speakers like Farley-Kuzmina cultivate their personal understanding of the pro-abortion rights movement.