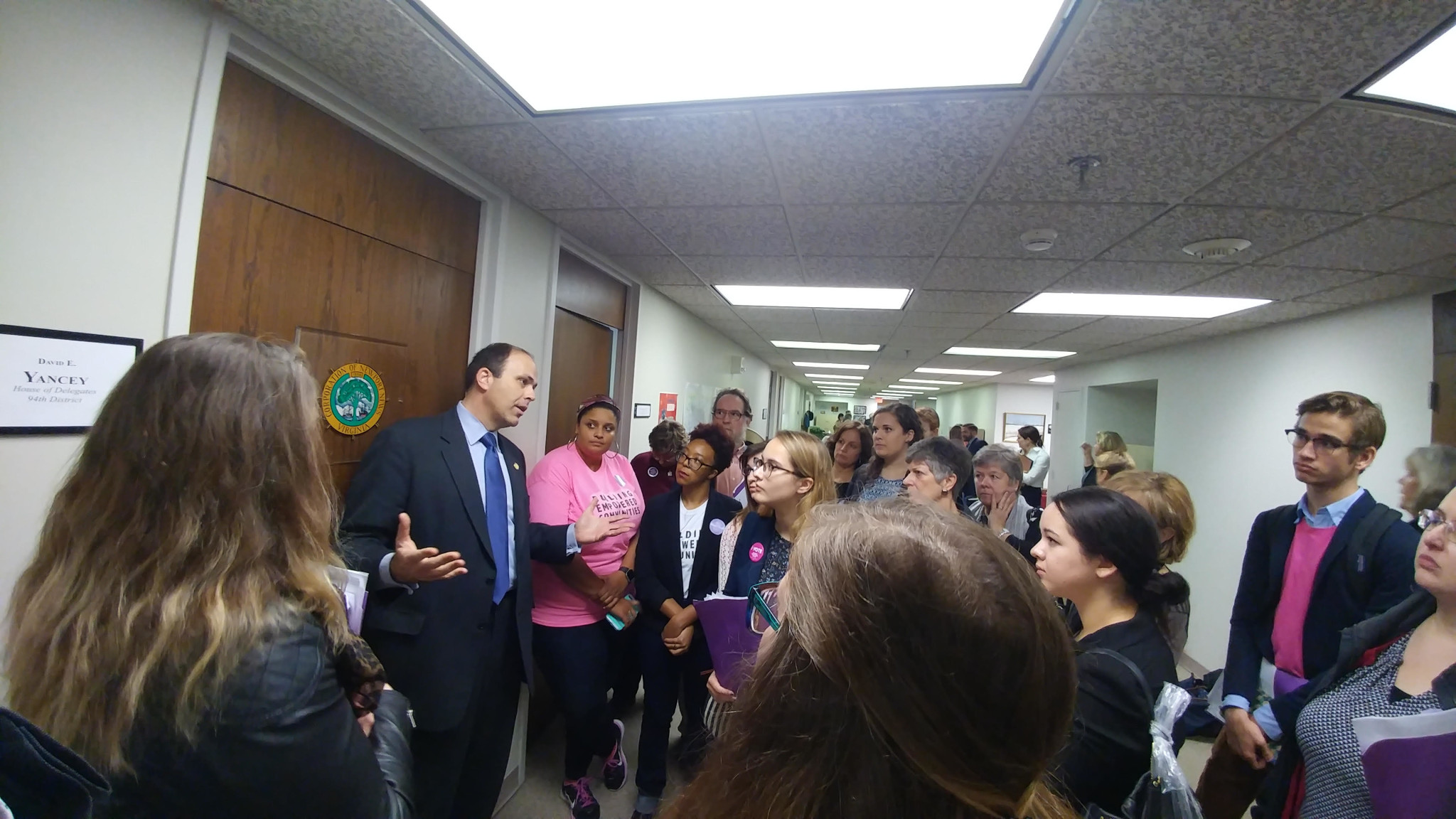 On the first Monday following the inauguration of President Donald Trump and the day after the anniversary of the Roe v. Wade Supreme Court ruling, students from the College of William and Mary gathered in Richmond to lobby with VOX: Voices for Planned Parenthood.

These students were participating in the Women’s Equality Coalition Lobby Day with the Virginia General Assembly, an annual event. The lobbyists were supporting bills including HB2267, which would change Virginia laws to allow physicians to write year-long prescriptions for oral contraceptives, and HBJ696, which supports a fair map-drawing process when redistricting happens in 2021.

Before students went to speak with representatives and legislative aides, they heard from Lieutenant Governor Ralph Northram and Governor Terry McAuliffe. With representatives from NARAL Pro-Choice Virginia and Planned Parenthood in the audience, Northram encouraged lobbyists to discuss abortion rights with their legislators.

“A lot of others have talked about this, but this is about decision making,” Northram said. “This is a decision that women and their partners, providers, physicians and doctors should be making. It is not a decision for legislators. You are getting ready to go up to the Hill and you’re going to see that unfortunately most of them are men. Let’s find it unacceptable for legislators who are men to be telling women what to be doing with their bodies. 2021 is a couple of years off, but that’s when redistricting happens. I have worked really hard, but there are some people who you can’t change their minds … we can’t change minds, but we can change seats.”

The wording of this bill upholds the fundamental right to access abortion in state law, repeals state restrictions that impede access to abortion and makes it illegal to enforce a new regulation on abortion that has no legitimate medical benefit.

McAuliffe addressed the audience and discussed the importance of elections at the state and national level.

He also said that it was crucial to elect Democrats to state offices because Virginia’s economic growth was dependent on overturning discriminatory legislation including an “HB2-like bill” that was overturned in a legislative committee earlier in January.

He said that he recently traveled to California to meet with three major high-tech companies about bringing their businesses to Virginia, and all three questioned the presence of the HB2-like bill.

“I’m telling you folks, that HB2-like bill that I had to veto, this is not hypothetical, it actually came to my desk,” McAuliffe said. “This is not some hypothetical reason why you need Democrats in office. If a Republican was sitting upstairs in the governor’s office, all those bills would be signed … hypothetically if companies like Microsoft, Google, Apple can go anywhere they want in the globe, they’re not going to a state that discriminates. This is how you grow the economy — through us working together to keep Virginia open and welcoming.”

One student, Cody Mills ’20, said that one of the highlights of the day was getting to talk to representatives’ legislative aides who report directly to them.

Mills was unable to talk directly to representatives, but he said that it still made him feel like he was going to have an impact on the General Assembly.

“That was really cool, just because they are going to relay it back directly to the person they are representing,” Mills said. “They are going to hear from us, and not just in the form of social media, we were face-to-face with them. Another highlight was going to stand and take a picture with Terry McAuliffe and others and just realizing that they are on our side and just realizing [all] of the power we do have to make change in the state of Virginia.”

Another student, Jessica Seidenberg ’19, was able to meet with her representative from Alexandria, Va., and representative for District 93 in the Virginia House of Delegates Mike Mullin.

Seidenberg said that one of her favorite parts of the conversations she had was the specific attention that Mullin paid to the bill on oral contraceptives.

“Both of them were very interested in meeting with us and talking with us,” Seidenberg said. “A lot of people here had met Mike Mullin, and I hadn’t before, and it was great to hear his perspective on things and see that he was interested in what we are working towards. He took specific interest in answering questions on the oral contraceptive bill and the bill on redrawing state lines. That kind of interest and attention really makes a difference and shows that he plans on serving us and not the other way around.”