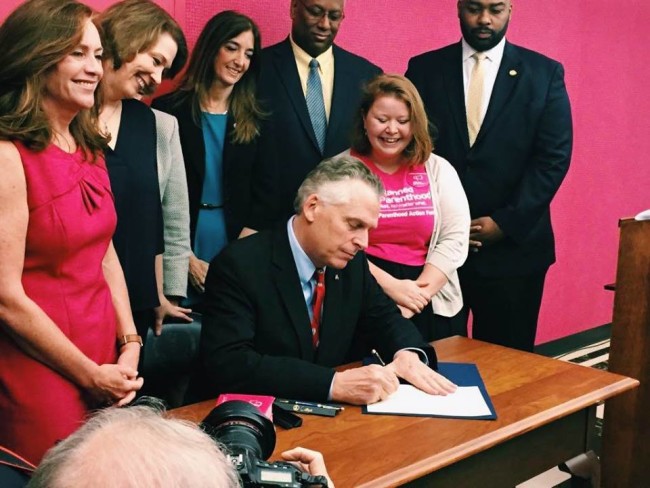 Activism and participation in social justice organizations may be common activities for many students at the College of William and Mary, but for Taylor Medley ’17, her work as an activist and advocate for reproductive and birth justice has shaped her time at the College and her plans after graduation.

Growing up in a mostly conservative community, Medley said she had very little access to information about the pro-choice movement, but distinctly remembers the first time she began questioning what she was taught as a child.

“One time my mom and I were driving by the local Planned Parenthood clinic, which I had always sort of known was there but hadn’t thought of much, and I saw protestors yelling outside,” Medley said. “I remember asking my mom ‘Why would they do that?’ and she said that it was wrong but we didn’t talk about it much. It just made me so viscerally angry. That’s when I really started questioning what I had learned.”

In high school, Medley and her friends sought out feminist-friendly spaces, but were turned down by the school. Their attempt at starting a gay-straight alliance was shot down, and, when they hung up posters once, each one was almost immediately torn down.

That’s why when she moved into the College she immediately sought out a feminist-friendly space, and found it in VOX: Voices for Planned Parenthood. During her first year, she continued to increase her involvement with the organization, and she went to the Richmond Planned Parenthood one weekend to work as a clinic defense escort, helping patients get inside the clinic safely.

“The first time I really realized that I had to do more was when the current VOX president at the time organized for us to do clinic defense,” Medley said. “Everything really came together then. I was nervous, and it was terrifying. People were very vocal and screaming at us and at the clinic. We are non-confrontational in that role, which means we can’t engage with the protestors. Toward the end of the day, I saw a woman trying to climb up the steps to a door that wasn’t the real entrance, and protestors swarmed her and just started praying around her. I was looking around for help, and I didn’t really know what to do. All of a sudden I just reached her and got her arm and asked her if she wanted to be there, and she was just sobbing, so I asked the protestors to leave her alone and got her inside safely.”

As Medley talked with the patient, the woman confided that she had felt too scared to say no the protestors who had swarmed her. That was when Medley said she realized that the anti-abortion movement regularly shamed women seeking care at medical centers that provide abortions. This pushed her to become more involved and to make use of any opportunity she had through VOX.

Medley now serves as president of VOX. On campus, she is also a member of the lead advisory board for the Haven. Her work there helps to create a safe space for volunteers who support survivors, and she facilitates small groups for them to discuss their advocacy. She also serves as a regular volunteer at the Haven. Additionally, she is a member of Health Outreach Peer Educators. Through HOPE, she plans and helps write the script for First Year Initiative conversations on consent, bystander intervention and healthy relationships.

This month, the Healthy Relationships and Sexual Violence branch of HOPE is helping organize events for Sexual Assault Awareness Month. While many universities choose different focuses for this month, HOPE is focusing on supporting survivors by creating a visible community of supporters and hosting events like Take Back the Night and a class called “How to Support a Survivor.”

The biggest thing I have learned through these organizations is that there are people from all different experiences and backgrounds,” Medley said.

Medley’s academic pursuits relate to her passion for activism as well. She is a gender, sexuality and women’s studies major and is part of the public health program. When she first came to the College, she planned on studying marine biology. Although she says she still has a passion for environmental justice, the intersection of her passions around health and feminism led her to the GSWS and public health programs.

Through her involvement with VOX, she has connected with reproductive and birth justice opportunities off-campus to help her further pursue her passions. She interned for NARAL Pro-Choice Virginia last summer and plans to work with them and Planned Parenthood again this coming summer. Over spring break, she participated in a Branch Out program at the Fan Free Clinic in Richmond. During this alternative break trip, she worked with LGBTQ, homeless and incarcerated communities and their health, especially as it pertained to addiction and HIV/AIDS.

Most recently, Medley had the opportunity to present a speech about what Planned Parenthood meant to her at Governor Terry McAuliffe’s signing of the veto for HB 1090, which would have prohibited the Department of Health from spending any funds on abortion or clinics in the state and specifically targeted Planned Parenthood clinics in Virginia if passed.

“It was very last minute,” Medley said. “The night before I got a call inviting me to go to the veto signing the next morning, and I was informed that the patient speaker for whatever reason didn’t want to speak anymore, so I was invited to prepare a few words on what Planned Parenthood meant to me since I’ve been involved as a patient, volunteer and intern. I could present a holistic view since I’ve been there in different capacities. I was nervous because I hate public speaking, but I thought that I would just speak to the citizens and volunteers before the governor came into the room.”

The morning of the veto signing, Medley was informed that instead, the CEO of Planned Parenthood’s Richmond location would introduce the governor, who would then introduce her. Medley says she was so nervous, but knew it was something she wanted to do.

“Governor McAuliffe was introduced and he said why he was vetoing HB 1090 and then he introduced me and said, ‘Here’s Taylor Medley, a student at the College of William and Mary,’ and I was star-struck,” Medley said. “So I shared my story, and he moved to his discuss where he signs bills and he normally signs with two pens. So he capped one pen and gave it to the CEO, and then he capped the second and handed it to me. It was really amazing. Afterwards I did like ten interviews with local news stations, and it was all a blur. It was so exciting seeing him sign the veto.”

Continuing her work with Planned Parenthood, Medley will travel to a national summit in Pittsburgh in May where she will learn how to do organize communities to empower them. According to her, these lessons are important because of the high volume of anti-abortion legislation introduced this year and the high levels of violence against abortion providers.

After graduating, she plans on going to graduate school to become a Certified Nurse Midwife to help promote birth justice. Through her work with Planned Parenthood, she also hopes to become certified in providing first trimester abortions. In the meantime, she is in the process of completing her doula certification. A doula is someone trained to assist a midwife who can help with special massages for women in labor.

Although there is violence against abortion providers and midwives, Medley said it is important to her to push past her fears and work in the field.

“I try not to think about the fear,” Medley said. “Hopefully we’re moving to a point where this will no longer be an issue.”

I try not to think about the fear. Hopefully we’re moving to a point where this will no longer be an issue” Medley said.

Medley said that her time at the College has taught her that it is possible for her to reach some of her bigger dreams, and has helped shaped her journey to become a midwife.

“Being in this atmosphere where students, professors and staff are supportive shows me that I don’t always have to play it safe,” Medley said. “I have learned that I can do more than I thought I could. I kept doubting myself. When I realized I wanted to be a midwife I thought it was too late because I hadn’t taken intro biology yet, and I didn’t really want to take intro biology. I talked to my friends and my amazing advisor Jenni Putzi, and they told me it wasn’t a far off idea. I started working towards that and they supported me. They taught me to reach for these big dreams.”

Editor’s Note: An earlier version of this article referred to critics of abortion as “anti-choice.” The article has been amended to reflect The Flat Hat’s style guide.