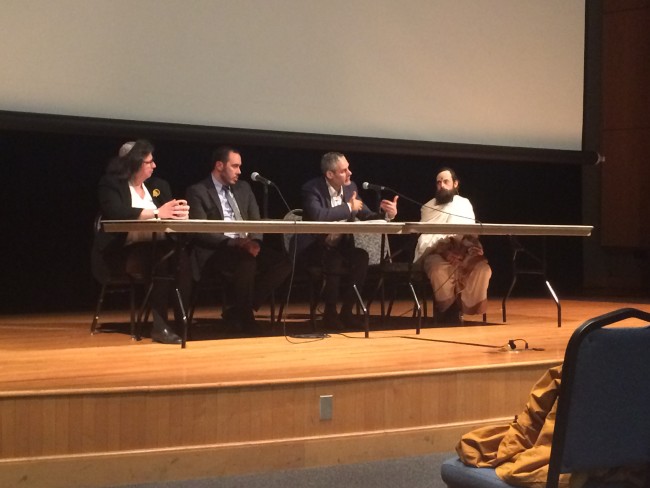 Leaders from five different faith traditions met to discuss the role of compassion in their spiritual practices Sunday, April 3. The Compassion Action Board, i-Faith, and the Wesley Foundation organized the event, which was housed in the Commonwealth Auditorium.

Representatives from the Compassion Action Board Matt Lentini ’16, Reaa Chadha ’16 and advisor Leslie Revilock opened the event by welcoming the five speakers. College of William and Mary President Taylor Reveley then gave opening remarks, in which he stressed the importance of compassion and empathy in the modern world.

The speakers each gave a 20-minute presentation outlining the role of compassion in their respective religions.

Lama Chodron Linda Jordan, a teacher of the Karma Kagyu tradition of Tibetan Buddhism in Richmond, spoke first on the role compassion plays in Tibetan Buddhism. Due to transportation issues, Jordan gave her presentation via Skype. She described compassion as central to the ethics and spirituality of Buddhism.

“In our own personal experience, the most fundamental thing we want is to be happy, and not to have suffering,” Jordan said. “And we recognize that every other person in the world wants these just like we do.”

In our own personal experience, the most fundamental thing we want is to be happy, and not to have suffering,” Jordan said.

The next speech came from Swami Gananath-amrit-ananda (Swami Ji), a Hindu Priest and Spiritual Director of the Soma Matha Organization in Richmond. Swami Ji began his presentation with a prayer. In his speech, he described Hinduism as a “monism” rather than as a monotheistic or polytheistic religion. Hinduism, according to him, holds that all god is in all things, and that this belief results in an attitude of compassion toward all things.

Imam Rachid Khould spoke next on the centrality of compassion in Islam. According to Khould, the true concept of “Jihad” does not involve military struggle, but rather the spiritual struggle to act with compassion rather than with selfishness. He also said that Arabic Jews, Christians and Muslims all use the same word for God and can be understood to worship the same God.

“‘Jihad,’ in Arabic, in the Islamic teaching, is the struggle within,” Khould said. “It is this constant struggle within us all the time. Can we be kind all the time? Let’s be honest. We all lose our temper. We all forget about the neighbor. All religions … teach us that we have an obligation to think of the other.”

Williamsburg Baptist Church’s senior pastor, the Rev. Daniel Wilson spoke next about the current struggle to follow Christianity’s teachings on compassion, citing the ongoing presidential race. He described his upbringing as a Christian fundamentalist and his journey to progressive Christianity. Wilson said that Christianity, as the world’s majority religion, needs to focus on being a force of compassion rather than oppression.

“The rise of evangelical support for Donald Trump reveals, quite visibly, I would argue, the dearth of compassion among American Christians,” Wilson said.

The rise of evangelical support for Donald Trump reveals, quite visibly, I would argue, the dearth of compassion among American Christians,” Wilson said.

Finally, Rabbi Ellen Jaffe-Gill talked about the importance of compassion in Jewish law. She emphasized the many requirements in the Hebrew Bible and the Talmud that stress compassion toward animals. Additionally, she said she was shocked by the lack of compassion shown by the state of Israel in its military occupation of Palestine.

Although there was little time left in the two-hour period for the question and answer session after the speakers finished presenting, one audience member asked the speakers about their thoughts on theodicy, or the ways they reconcile the goodness of God with the suffering in the world. This question sparked a brief discussion about the nature of evil in the world.

About 30 people attended the event, many of whom were not Tribe students.