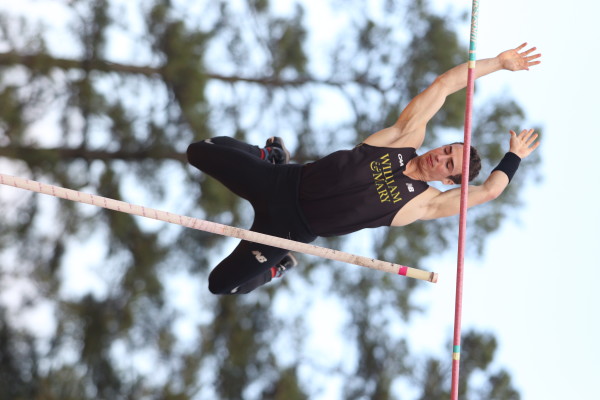 William and Mary hosted the 51st Colonial Relays in Williamsburg over the weekend, with the men finishing in fourth place, while the women took fifth. Four champions, three individual and one relay, along with a bevy of ECAC qualifiers and top 10 finishers on both teams, highlighted the College’s performance.

The women had solid performances across the board. Sophomore Leia Mistowski kicked the weekend off on Thursday in the hammer throw, finishing as the top collegiate performer in the event with a throw of 53.28 meters. Mistowski earned a potential ECAC qualifying mark and finished second, following unattached thrower Nicky Grant.

Saturday was highlighted by two event victories. First, the 4×1,500-meter relay team of junior Molly Applegate, senior Meghan McGovern and sophomores Molly Breidenbaugh and Regan Rome finished first with a time of 18 minutes, 25.32 seconds, the fourth fastest time in school history. Rome followed up by winning the 5,000-meter run and qualifying for the ECAC Outdoor Championships, coming in at 16 minutes, 12.82 seconds.

I felt really relaxed out there and I was really happy with the race this weekend,” Rome said. “It’s so nice to come out and win at the home track.”

“I felt really relaxed out there and I was really happy with the race this weekend,” Rome said. “It’s so nice to come out and win at the home track.”

Breidenbaugh also qualified for the ECAC Championships in the 5,000 meter, finishing 13th overall with a time of 17 minutes, 8.12 seconds.

The Tribe had a plethora of top 10 finishers this weekend, including senior Rochelle Evans in the hammer throw, shot put and discus, senior Becca Eudailey in the 10,000-meter run, junior Molly Applegate in steeplechase, sophomore Jacqueline Meeks for pole vault, freshman Grace Becker and sophomore Minna McFarland in the high jump and a strong showing in the 4×400-meter relay.
The men’s weekend included strong finishes and IC4A qualifiers as they battled hard in a wide range of events. The qualifiers were sophomore Dawson Connell in the 1,500-meter run, junior Faris Sakallah in the 10,000-meter, sophomore Davion Hutt in the 100-meter dash, senior Brian Waterfield in the hammer throw, sophomore Derek Trott and senior Robert Smutsky in javelin, and senior Ryan Gousse, junior Cavender Salvadori and sophomore Mac Haight in the steeplechase.

You know it’s their home event and they really went out and put a show on,” said director of track and field Stephen Walsh.

“You know it’s their home event and they really went out and put a show on,” said director of track and field Stephen Walsh.

The College rounded out the weekend with two champions on Saturday. A 4.97-meter pole vault by senior Derek O’Connell was enough to win the event, the first time a William and Mary athlete has won the event at the Colonial Relays since 1971. Hutt won the 100-meter dash in 10.74 seconds, the fifth fastest time in school history, also setting a personal best of 21.68 seconds in the 200-meter dash, good for an 11th place finish. The 100-meter win was the first time a member of the Tribe won that race at the Colonial Relays since 1976.

“Colonial Relays is a marquee event on the East Coast, so for those guys to go out there and compete and set records that you know being the first William and Mary person to do it in some 40 years, well that’s amazing,” Walsh said.