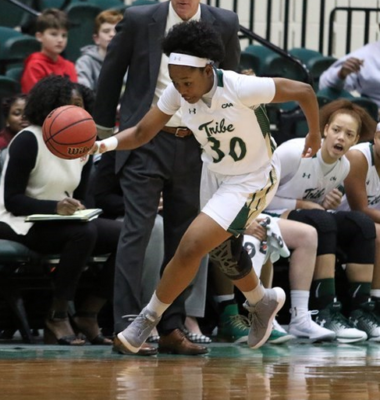 The Pride was able to obtain a seven-point lead with a 10-3 run at the start of the game. The Tribe was unable to score until freshman guard Nyla Pollard scored three points, following four points for the Pride. Three layups for the Pride concluded the run.

The College gained its first lead of the match with a seven-point run after trailing 14-8. Senior guard Jenna Green ignited the rally with five consecutive points preceding a layup from junior guard Bianca Boggs, which pushed the Tribe into a 15-14 lead.

The Pride regained a seven-point lead early in the second quarter after clocking in 10 points compared to the two for the Tribe from a layup by sophomore forward Victoria Reynolds. However, with a mere 3:43 left in the half, the Pride sank back-to-back three pointers, bringing the score to 26-19.

The Tribe fought back, diminishing the Pride’s lead to four, but was met with a 9-1 run in which Hofstra gained the largest lead of the game.

Throughout the rest of the match, Hofstra maintained its lead, and the match concluded with a 65-54 victory for the Pride.

During the match, the Tribe and Pride had comparable turnovers, 18 and 17, respectively. The Pride outdid the Tribe with seven more rebounds and eight steals compared to the Tribe’s seven.

The College made 23 of 54 shots, a 42.6 shot percentage. Three of the Tribe’s four three-pointers came from the first three attempts.

Boggs and Reynolds tallied 15 points apiece, leading the Tribe for the match. This marks the 15th time that Boggs has obtained double figures during a game this season and the 32nd time during her career.  Reynolds has now registered double-digit points in 10 games this season. She sank seven rebounds, an assist and a steal. Meanwhile, Boggs registered four boards, three assists and three steals. Green totaled nine points for the Tribe with four rebounds and three assists. Pollard followed closely behind with a CAA career high of eight points and four rebounds.

Sunday, the Tribe hit the road again to face off against Northeastern. The College dropped a 64-46 loss against the Huskies (9-9, 3-4 CAA).

The Huskies exploded with the first whistle and earned a 10-point lead with a 12-2 run with Boggs putting the Tribe on the board.

Digging deep, the Tribe decreased the Huskies’ lead to five on a 9-2 run. The run was opened by Pollard with a 3-pointer followed by a layup from Boggs. Green ran the length of the court and freshman center Gabby Rogers had a putback to bring the score to 28-23.

The College fought back feverishly and cut the Huskies’ lead to single digits three times during the second half, but the Huskies regained a substantial lead after a six-point run with 2:12 remaining in the third quarter.

The Huskies maintained a considerable lead until the conclusion of the match.

Boggs led the College offensively with 15 points, matching her contribution from the previous match against Hofstra. Reynolds was the only other player to reach double-digit points against Northeastern.

The Tribe shot a season low, completing 18 out of 58 shots, which clocks in at 31 percent. This was combined with a staggering 22 turnovers compared to 13 by the Huskies.

Looking ahead, the Tribe will host the first of a three-game homestand against the College of Charleston Jan. 26 in Kaplan Arena at 7 p.m. The College will then face off against Hofstra Jan. 28 at 2 p.m.

Sunday, the College will be hosting its first annual National Girls and Women in Sports Day, which will highlight fair play and awareness of Title IX, as well as work toward equal opportunity in sports.