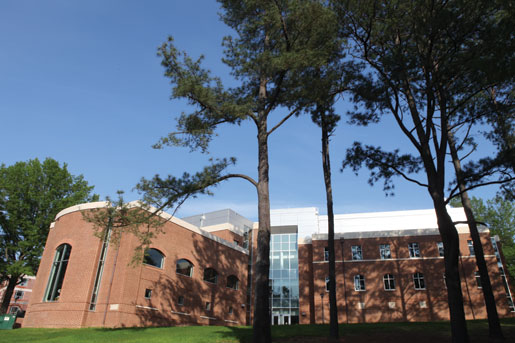 The College of William and Mary was recently selected by the American Physical Society to host next year’s Conference for Undergraduate Women in Physics for the region. The three-day conference, which will run Jan. 18-20, 2019, seeks to foster a community among women in the physics field and encourage female undergraduates to pursue careers in the field.

The College is one of 11 schools throughout the nation that will be hosting ASP’s regional conference next year. These different conferences will take place at the same time at their respective geographical locations.

Each conference will include a variety of activities ranging from research talks given by faculty members to panel discussions about graduate school and careers in physics to presentations about women in the field and laboratory tours.

Next year’s event will feature one or two keynote speakers in addition to other professionals from a wide range of backgrounds, both academic and industry related.

According to physics professor Irina Novikova, who is playing a leading role in the event’s planning, the conference will seek to discuss a wide range of topics and research within the field of physics.

“This is a conference directed to the undergraduate women, and many of them come and they don’t quite know what kind of research interests they have, [or] what kind of area of physics they want to do,” Novikova said. “Often, even if they do have interests, they want to find out what’s going on in other fields.”

The College will be partnering with the Jefferson Lab, which has been involved in previous years’ conferences, in hosting this event. It will include tours of their laboratory along with exposing attendees to the Lab’s research in energy.

According to the ASP website, the official goal of these conferences is “to help undergraduate women continue in physics by providing them with an opportunity to experience a professional conference, information about graduate school and professions in physics, and access to other women in physics of all ages with whom they can share experiences, advice, and ideas.”

In order to be chosen as a conference host, schools are required to submit applications that include an outline of their estimated budget, a proposal of recruitment plans, a tentative schedule and several letters from the institution’s department chair, the organizing committee chair and others involved regarding commitment to the event and its funding.

Novikova spearheaded the College’s application process and played a significant role in drafting the proposal, along with planning the event.

The College applied last fall to host the event and was notified in December that the next conference would be held in Williamsburg.

“I think we are really special this year because my class in particular, and the class under me, has a lot of very active students and a lot of very active women, so I think having that level of support definitely helped us this year, but it was a bit of a surprise,” Society of Physics Students President Ravn Jenkins ’19 said.

Jenkins, along with several other students, is also involved in preparations for the conference and sits on the planning committee.

The responsibilities of the committee include helping to decide what kinds of seminars and talks will be featured at the event and advertising it to the regional STEM community.

Next year coincidentally happens to be the College’s 100-year anniversary of female admission, making the hosting of this female-oriented event even more significant for the students and faculty involved.

“Having this conference on the centennial of accepted women in the College would be a great opportunity,” Novikova said.

Although the College is hosting the event, students and faculty members from other academic institutions in the region are also invited to attend.

However, because there is limited space available at the conference, students must apply through APS in order to attend.

In addition, the event is not exclusive to women, and students of all gender identities are invited to apply.

Women are generally a minority within the STEM fields; however, Novikova hopes that by hosting this event, the College can change this by encouraging women to pursue careers in STEM.

“If you are a minority, you might notice some smaller problems or difficulties, and you always tend to personalize it, and when you go and talk to other people and figure out that everyone goes through that, it is a very empowering experience,” Novikova said. “I uniformly have seen very positive experiences that students have had with these conferences, and that’s one of the reasons why I want our students to have a chance to host one here.”

Jenkins, who attended this year’s regional conference at the University of Virginia, said she has experienced the impact of the Conference for Undergraduate Women in Physics firsthand.

“I’m really lucky; I have four or five really strong female peers in my class, but it was really good to be sitting in a room with over 100 of us all interested in physics and all also shared experiences of the struggles that come with being a minority in the STEM area,” Jenkins said. “It was also great just to meet these women who are now tenured professors and who have gone through similar things and also hear about some cutting-edge research that they were doing.”