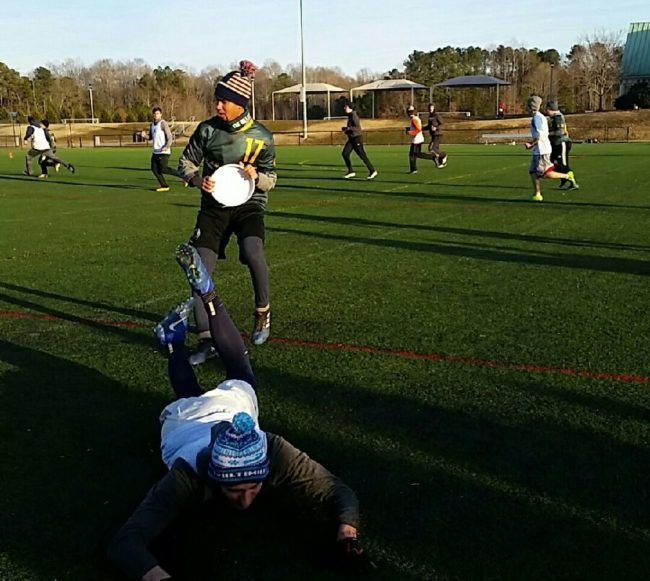 The dedication of a varsity sports team, the enthusiasm of incoming freshmen and the skills acquired through years of committed practices brought Darkhorse to the Warhill Sports Complex at 8:30 a.m. Saturday.

“So this is actually one of, if not the, biggest tournament that any William and Mary team has ever hosted, so we’re pretty proud to be putting that on,” Darkhorse President Matthew Straus ’18 said.

Saturday kicked off the team’s spring season with pool play. The 20 teams, including No. 1 Virginia and schools as far away as Ohio State and Illinois, were broken up into four pools, each consisting of five teams. The College’s A-team, Darkhorse, is ranked fourth at the Division I level. They competed in Pool D alongside Illinois, Williams, Drexel and Syracuse. The College also has a men’s B-team, Seahorse, and women’s A- and B-teams, Mother Huckers and Woolly Mammoths, respectively.

The teams played for hours through freezing temperatures on concrete-like turf. The weekend even saw a few scattered showers, which did not seem to faze the steadfast Darkhorse.

The two main positions in Ultimate are the cutter and the handler. The cutter’s job, like a catcher, is essentially to get open for a pass, and this player is efficient at running and catching. The handler is the player who primarily handles the disc through three major throws: the hammer, backhand and forehand. The sport is also self-officiated, so the teams are responsible for making their own foul calls and resolving the issues justly and accurately.

“It’s a very sportsmanlike game,” Helms said. “The fouls are self-officiated; we don’t have any referees here.”

Darkhorse kicked off pool play against Syracuse, defeating them 13-7. They went on to defeat Williams 13-3 and Drexel 9-3. In the final contest of the day, Darkhorse faced off against Illinois, both teams 3-0 in pool play. After consistent back-to-back points until halftime, Illinois came out on top with an 11-8 victory, putting Darkhorse in second place (3-1) at the end of the day.

For many of the players, Darkhorse is more than just another activity or a way to spend a few weekends — it is a lifestyle.

“[Frisbee]’s really become a part of me. I think people now think of me like, ‘Oh, Moussa the Frisbee guy.’ That’s kinda like my label,” Darkhorse co-captain Moussa Dia ’18 said. “But yeah, it’s grown to be a big part of me, and the guys are great.”

Sunday, Darkhorse started off their morning with a match against Dartmouth in the quarterfinals. The hard-fought battle barely slipped through their fingers in a 12-11 loss, putting Darkhorse in the running for fifth place. The team’s vigor and spirit shined through in the following games against George Washington and Georgetown. George Washington was unable to secure even half the points that Darkhorse scored as the home team cruised to a 15-6 victory. Despite being down early in the match, Darkhorse came back strong to secure an 8-7 victory over Georgetown.

The origin of the team name is part rumor, part legend, passed down from teammate to teammate over the years. Straus describes it as a sort of underdog tale.

“I’m not sure what the exact [story] is, but around early 2000, our team was the best that it’s ever been and went to nationals, which the top 20 teams in the nation go to. And [the College] just sort of had joke names — they didn’t take themselves too seriously,” Straus said. “So after the first year, they made it; they did pretty well. The second year they made it the governing body for ultimate Frisbee said that they needed like an official team name, and so they said Darkhorse because no one really knew anything about the team and [it] sort of came out of nowhere, the Darkhorse of the tournament.”

Darkhorse ended their time on the turf by turning and thanking the fans who came out to support them on the brisk, drizzly Sunday afternoon. The team’s pride shined through their cheers and smiles as they huddled up one last time.

“To be honest, Frisbee is my life,” Darkhorse co-captain Gus Norrbom ’20 said.

The tournament concluded with the College taking fifth place out of the 20 teams invited. Illinois, one of the two teams that defeated Darkhorse during the weekend, ended up in first place. Darkhorse’s next conquest will be the Easterns Qualifier Feb. 17-18 in Little River, South Carolina, with the goal of making it to regionals in April.

“I think it’s going to be a big year for us, and I can see this team going far places,” Dia said.