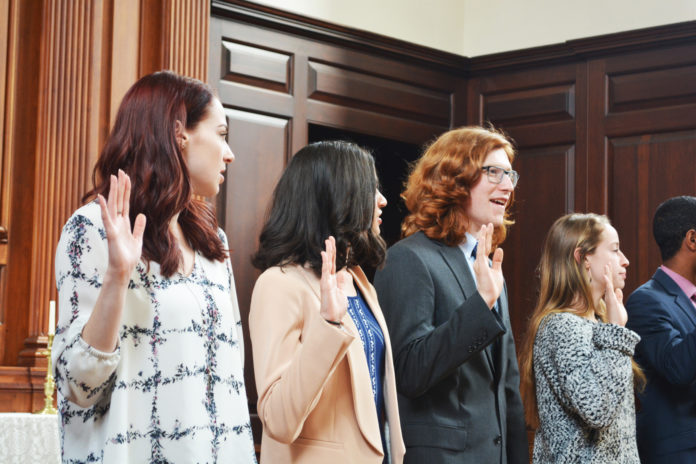 Before the inauguration ceremony, College of William and Mary President Taylor Reveley commended outgoing SA President Elijah Levine ’18 and shared his thoughts on what it feels like to be an effective leader.

“Let’s think about why leading can be an absolute joy, a great sense of satisfaction,” Reveley said. “At its core, leadership is a capacity to influence, to really have an influence on what an organization’s agenda is and what actually gets done. It’s the capacity to make a real difference for the better. When you do that, as a leader, and important things get done … that’s enormously satisfying and it’s also fun. To be effective as a leader doesn’t happen just because we win an election or get an appointment. Each of us by trial and error have to learn how to capture other people’s attention, how to persuade them to do what we believe is important to do … on days when we are leading effectively, life is exhilarating.”

Following Reveley’s remarks, Levine reflected on his time in office and thanked outgoing Vice President Annelise Yackow ’18, outgoing Chief of Staff Noah Ferris ’20 and his cabinet for supporting him and his ideas. Levine also gave advice to Boylan and Tawalare on how to ensure their ideas come to fruition.

“Serving as your Student Assembly president for the last year has been the defining experience of my time at William and Mary,” Levine said. “It’s amplified my love for the place and reified my passion to make it better. … Since my campaign began, I’ve been lucky to have a dedicated and caring support group.”

Levine also agreed with Reveley that, as a leader, finding out how to execute ideas and influence others can be a challenge.

“So many times, as President Reveley was alluding to, this position was overwhelming,” Levine said. “An idea is only as good as the plan to execute it.”

Following Levine’s speech, both new and returning class presidents and senators were sworn in. All who did not attend the official inauguration ceremony will be sworn in during a senate meeting before they are allowed to deliberate on any business.

Boylan and Tawalare were each then sworn in. Following tradition, Boylan took the podium as the official SA president to share his thoughts on his election and to outline his vision for the 327th session of SA.

In his speech, Boylan said that he did not think it was fair to discuss the history of the College without acknowledging its history of slavery. However, he said that he hoped to use this history, and the progress the College has made, to inform the agenda of his administration.

“We must understand the complicated history of William and Mary and we cannot discuss the history of this institution without discussing the evils of slavery, Jim Crow and subjugation,” Boylan said. “… In these difficult times, it is easy to despair and worry for the future, but here in our community, we see the light at the end of the tunnel. We walk along with future doctors, lawyers, musicians, artists, politicians … that will steer the course of America and the world entirely.”

Boylan said that although progress could not come just from his administration, he believed that the education the College provides has at its roots a mission to make the world better. He said he hoped to use this as a basis for promoting change during his tenure as president.

“Simply stated, there is no such thing as the inevitable,” Boylan said. “Progress does not come from acts of God nor from those currently in power. … [But] that is the dream of an education like ours, a pursuit of higher learning that not only embraces rigor and critical thinking, but compassion, empathy, a willingness to go beyond our preconceived notions. This can only be realized when we create conversations that include all voices. … No one, no matter where they are from or what they are given, gets through life alone.”

Boylan then outlined his priorities for his administration, once again affirming that the creation of an SA policy advisory committee was a top agenda item.

“I believe that Student Assembly in its best form is a place for people to come together,” Boylan said. “… The simple truth is that there is only so much we can do in a given year under a given administration. The time we have here is too short, the work to be done is too great to allow feelings of animosity and distrust to persist any longer. Though the task before us may seem daunting … even the smallest acts of kindness can change the course. … That is why our administration, through working closely with the senate and by executive order will establish a policy advisory committee … we will rebuild our judicial branch to revise our constitution … we will reform the Executive Appropriations Commission and the budgetary process to ensure equitable treatment of constituent student organizations.”

Tuesday, April 10, Tawalare will preside over the SA senate in his first meeting following inauguration. At this time, the senate will elect a new chair to replace outgoing Chair of the Senate Alaina Shreves ’18.