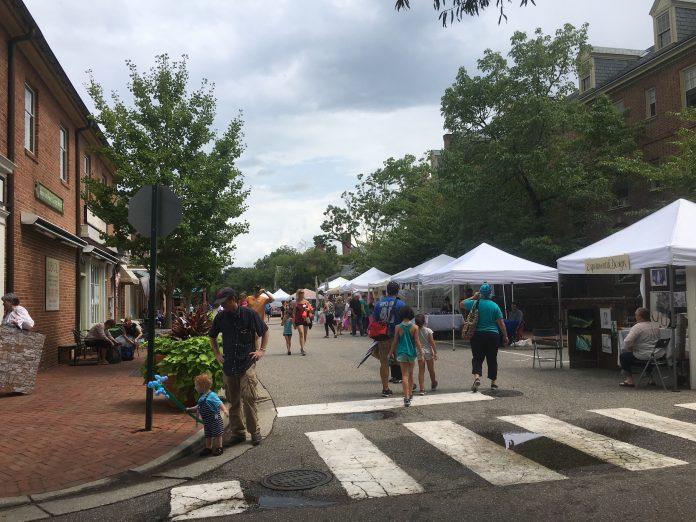 Williamsburg’s Prince George Street, while beloved by students for hosting popular restaurants like Aromas and Blue Talon Bistro, is not particularly known for its constant flurry of activity. Yet Sunday, Sept. 9, it was filled to the brim with tents, all purveying wares like pottery, clothing, jewelry and art. People bustled from location to location, taking in the sights and sounds, and watching all kinds of performances, from guitar playing to singing to Irish step dancing.

This is all part of 2nd Sundays Art & Music Festival, the City of Williamsburg’s street festival, which brings art, food, performance, live music and locally made goods to Prince George Street the second Sunday of the month, every month, from March through December. Fans of the event have Shirley Vermillion, the organizing and planning mind behind 2nd Sundays, to thank.

The idea for a street festival came from Vermillion’s history in Seattle, Washington, where such affairs are a common occurrence. She loved the Northwest, but had grown up in Virginia, and eventually decided to return to a beloved job in the area as a dental hygienist. When she and her family moved back to Williamsburg, the sudden lack of public arts festivals was an inescapable difference.

“I was just used to street festivals — that was part of my life in the Pacific Northwest,” Vermillion said. “I just assumed that, being a college town, there would be fun things for people of all ages, including college students and high school students … and found that there were no street festivals. And there were only a couple of art events, that were more geared toward adults.”

After trying (and failing) to find street festivals in the area, waiting for one to appear and thinking on it for more than a few years, Vermillion finally decided to start one herself. She turned to David Everett and Adam Steely, co-owners of the Blue Talon Bistro, for help in setting up the first festival. They responded enthusiastically.

“David and I had been a big fan of that type of entertainment since we opened,” Steely said. “The first year we were open, we would reward buskers for performing outside our restaurant. We would put cash in their guitar cases if they wanted to come play, because we thought that adds that kind of welcoming … atmosphere that’s a little less buttoned-up than downtown Williamsburg sort of had an image for.”

The festival was equally designed to help give local artists a place to display their work as well as give Williamsburg a different kind of cultural draw for tourists. Steely said that the festival’s unique approach to the arts and the arts’ value to Williamsburg was part of the reason he initially wanted to help sponsor it.

“[Vermillion] wanted to be very clear in her message that this was a street festival, not an arts show,” Steely said. “… We had several people approach us over the years about doing street festivals, in a number of different incarnations, but she was the only person who had pitched art and music and cultural elements combined in a way that complemented the other art events we have, but was distinct and different. … She was very inclusive and very embracing of the community at large.”

For Vermillion, this combination of artistic elements was vital to her vision for 2nd Sundays, one that she continually works to get closer to every month, though growth has been gradual.

Recent additions to the 2nd Sundays roster include Shakespeare in the Park, local dance school performances, juggling, new local guitarists, a henna artist and more street food. Vermillion hopes to add even more variety to the artists at the festival in the future, and is open to anything from unicyclists to mimes.

At the time the festival began, Prince George Street was already closed Sunday nights for movies. Because of this, Steely and Everett already had the correct insurance, permits, restrooms and first aid resources for a street event, and it was easy for them to help Vermillion by adjusting these to accommodate 2nd Sundays, in addition to fronting the costs for the first few years.

Sponsorship of the festival has since been shifted from Steely and Everett to CultureFix, a nonprofit dedicated to bringing the arts to Williamsburg’s public. CultureFix’s founder and president, Steve Rose, felt strongly about continuing to support events like 2nd Sundays that bring culture to the City of Williamsburg.

“One of the main things of our mission is to think outside the box, not do the normal standard stuff and also not to do things purely based on budget,” Rose said. “We look at the need … if it’s missing in the community, and we take a calculated risk … Just because it doesn’t make money doesn’t mean we won’t do it.”

Both sponsors merely help Vermillion achieve her vision for 2nd Sundays, rather than gaining creative control through their sponsorship. Vermillion and her passion for bringing art to the community, everyone admits, is the driving force behind the festival.

“My favorite part of the festival is just seeing the smiles on so many different people’s faces … of different ages,” Vermillion said. “Multigenerational smiles … [and] the fact that it’s such an awesome community gathering spot.”

The festival is now in its ninth year, having started in 2010, and is still growing both physically and culturally. It has grown from its original home, on the 400 block stretch of Prince George Street (right outside of Blue Talon Bistro and Aromas), to the area near the Triangle on the 600 block of the same street, and along two blocks of Boundary Street. The artists who participate have also grown in number and become more varied, expanding from 16 artists and one musical act for only three hours, to its current maximum of 85 vendors and at least 10 live performances over the course of six hours.

“Things happen in the time that I can manage,” Vermillion said. “If it had been [this big at the beginning], I wouldn’t have even known how to manage that much.”

Still, Vermillion is always on the lookout for more vendors, and is definitely open to the idea of students hosting a booth to sell art or other products at the street festival. She waives the $85 fee artists must pay to be officially included in 2nd Sundays, which goes toward paying for insurance and other necessities for the fair.

“Students have always been free, so if it’s a student or group of students who want to have a tent, I would always waive the fee,” Vermillion said.

Vermillion, Steely and Rose all expressed a strong desire for more students from the College of William and Mary to visit the street festival every month, even if students wandered around just to enjoy the sights and music without buying anything.

“I’ve always dreamed of having more interaction, with the normal population of Williamsburg connecting with the students,” Vermillion said. “There’s so many [things to see], I think [college students] should just cruise through all of the streets. And just see which booth makes them turn their head.”