The U.S. Senate confirmed Supreme Court nominee Brett Kavanaugh Oct. 6 in a 50-48 vote. This vote sparked a national conversation. Late in the summer, allegations arose that Kavanaugh had sexually assaulted Christine Blasey Ford when they were both in high school. These allegations, and others that arose, were at the heart of the confirmation hearings.

On campus, this national conversation took many forms. A few students and staff members walked out of classes Sept. 24. Others participated in a government and gender, sexuality and women’s studies panel discussion. Then, 272 students signed an open letter drafted by the College of William and Mary’s chapter of Amnesty International. This letter called upon College President Katherine Rowe to show her support for survivors of sexual assault.

Amnesty International Co-Presidents Patrick Salsburg ’21 and Sam Berkrot ’19 worked with the organization’s My Body My Rights committee to draft, edit and share an open letter. The letter was finalized Oct. 2, before Kavanaugh was confirmed, and focuses on the concerns students shared during the hearings and desire to support Ford and other survivors of sexual misconduct and assault.

“President Rowe, as the leader of our historic institution, we feel it is imperative that you, personally, publicly stand with survivors of sexual abuse and affirm that your leadership will be just, empathetic, and bold,” Amnesty International said in the letter.

“We recognize that we are asking you to address a highly politicized issue,” Amnesty International said in the letter. “However, we believe it is not political to support the protection of human rights, which in this context is the right for students, staff, and faculty to know that sexual abuse is being addressed appropriately at William & Mary. We also believe that it is not political to remind your community that you are listening to them, that you believe them, and that you stand with them. President Rowe, as the leader of our historic institution, we feel it is imperative that you, personally, publicly stand with survivors of sexual abuse and affirm that your leadership will be just, empathetic, and bold.”

Amnesty International began to share the letter Wednesday, Oct. 3 and sent it to Rowe Friday, Oct. 5 at 9:15 a.m. In that time period, they collected signatures from 272 individuals and 21 student organizations.

“We felt that, in light of the Kavanaugh hearings and Dr. Ford’s testimony, it was important that President Rowe expressed empathy for our community and came out strongly against sexual assault,” Berkrot said.

According to Salsburg, the main goal behind releasing an open letter was starting a direct conversation between students and Rowe about sexual assault.

“Initially, we would like to see President Rowe make a statement affirming that she stands with survivors on campus and does not tolerate sexual assault,” Salsburg said in an email. “But this is just a first step.”

After the letter was shared with the campus but before it was sent to Rowe, Vice President for Student Affairs Ginger Ambler ’88 Ph.D. ’06 sent a campus-wide email, advertising a “Chat and Chew” lunch hosted by the Center for Student Diversity focusing on healthy relationships and calling upon students to care for each other.

“At a time when the issues of sexual assault and harassment are so much a part of the national dialogue, caring means remembering there are many in our midst — students, faculty, staff — whose lives or whose families or friends have been touched directly by such violence,” Ambler said in her Oct. 4 email. “Conversations among students and colleagues over this last week leave no doubt that fellow members of our Tribe are experiencing particular pain and anguish as survivors of sexual assault. Now more than ever, we affirm this community’s support for survivors.”

In this email, Ambler also shared information about confidential reporting options including The Haven.

Rowe responded to the letter after it was sent to her, sharing a statement that addressed sexual violence and survivors during this time. The College’s web page on Sexual Violence was also updated with a statement from Rowe. 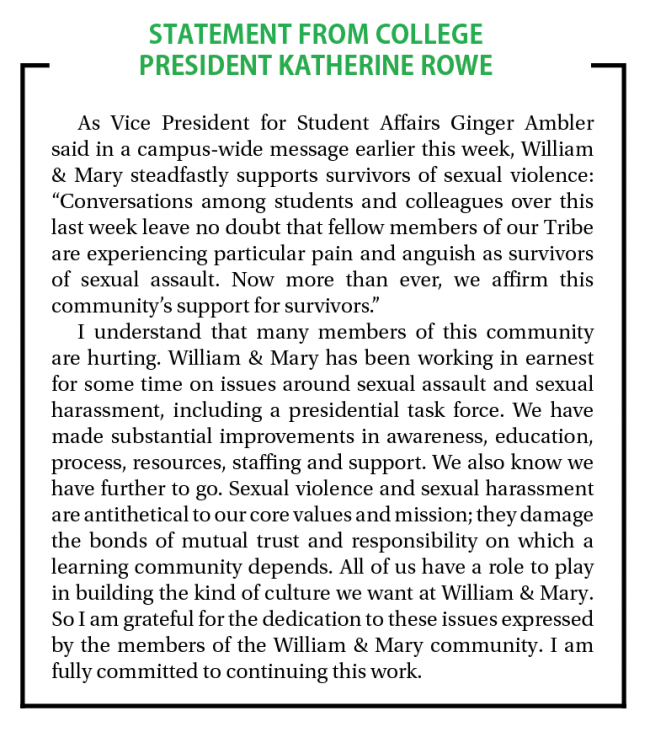 “I understand that many members of this community are hurting,” Rowe said in a written statement. “William & Mary has been working in earnest for some time on issues around sexual assault and sexual harassment, including a presidential task force. We have made substantial improvements in awareness, education, process, resources, staffing and support. We also know we have further to go. Sexual violence and sexual harassment are antithetical to our core values and mission; they damage the bonds of mutual trust and responsibility on which a learning community depends. All of us have a role to play in building the kind of culture we want at William & Mary. So I am grateful for the dedication to these issues expressed by the members of the William & Mary community. I am fully committed to continuing this work.”

Berkrot said that they will continue to engage in conversation with Rowe and that the group has also received positive responses from other students on campus.