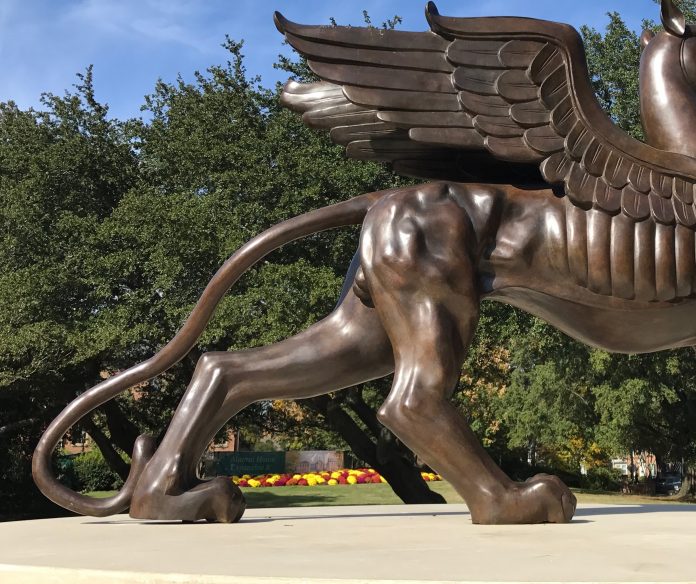 Our beloved College of William and Mary has recently placed, or in the words of my colleagues, “erected,” a large statue of the Griffin outside of Zable Stadium, causing noticeable confusion and dismay before promptly being turned into a meme (as happens to most things nowadays). But memes aside, this bronze statue seemingly portrays Tribe sports in a light which they are striving to abandon: namely, as a joke.

However, I’m here not only as the devil’s advocate, but as a wholehearted believer in the sanctity of this statue as a symbol for our school pride and a representation of our insatiable desire for excellence. Here’s why the Griffin statue is exactly what we need.

The statue is absolutely magnificent. Perfectly sculpted, expertly designed to promote its most striking features, and strategically positioned to drive fear into the hearts of our enemies, our griffin should find endearment where instead it finds ridicule.

Like the impressive figure of a stoic Roman emperor, our griffin stands before our own Field of Mars, leading our faithful troops into battle after battle, rebounding from our lowest losses and relishing in our greatest triumphs.

Indeed, with features chiseled akin to Michelangelo’s David, our Griffin represents the tenacity of the Tribe spirit in the face of many a terrible Goliath.

But with this conscious emphasis on classical interpretations of the perfect form, why is the College looking to the past when it should be looking forward?

While the College’s taste in sculpture is commendable and reflects a deeper respect for the arts that has potential to propel it into a golden age, we have to think about the future and the effects of our current actions.

You see, this statue was not made for the College specifically but was produced for a separate institution.

How could we live with ourselves if we let a fellow Griffin fall by the wayside, lost and abandoned and forsaken by its own people — the very same people who simultaneously confess their undying loyalty to it and don’t have the courage to do what is right?

A people who can’t rely on the strength of their convictions to act justly, fairly and righteously toward a fellow Griffin.

It is our civic duty to harbor this homeless griffin and to give it the community he never had.

But to do that, to truly give this lost imaginary creature the home it deserves, we must welcome it with open arms. Instead it is scorned and mocked, the victim of a childish and school-wide derision that is costing us our dignity.

In this day and age, our administration must understand that anything can be turned into a meme.

Few on this campus will appreciate the chiseled form of our magnificent Griffin, each of the artisan’s masterful strokes contributing to an elegant and fierce masterpiece.

I, for one, will kneel before our saintly Griffin and sell him my eternal soul, but that’s just me.