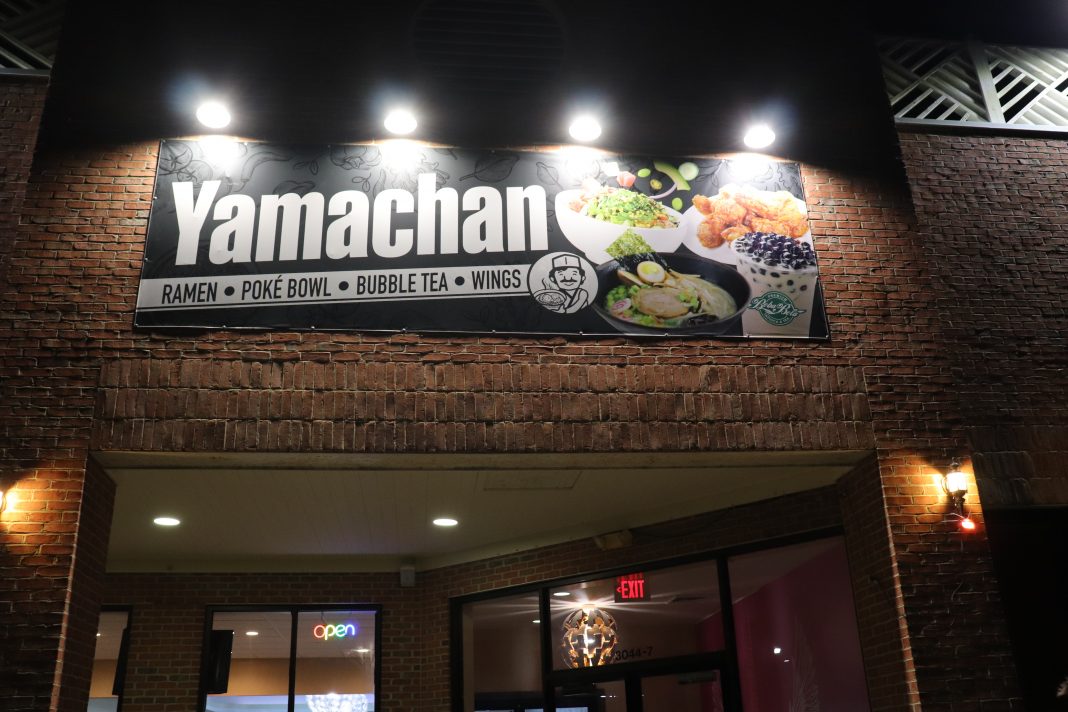 A new restaurant in Williamsburg that is not a pancake house is always a big event. In December, Yamachan joined the family of new Williamsburg restaurants such as Mellow Mushroom and Chick-fil-A that had arrived in town this school year. Yamachan offers Japanese ramen and bubble tea drinks in a casual dine-in atmosphere.

Located far down Richmond Road near the outlets, even past the Yankee Candle, getting to Yamachan can be somewhat of a journey for students without a car or other means of transportation. However, Yamachan’s modern and spacious interior works great for sit-down meals with friends over a bowl of ramen, making it worth the drive.

Personally, I am no expert on ramen, but I was excited to try ramen loaded with toppings like eggs, chicken, chives and bean shoots. The customer can select between a miso base, tonkotsu base or shoyu base from the menu for the broth of their soup. I personally chose the miso base with chicken as my protein.

When I ordered my ramen, I was not expecting anything exceptional. The ramen performed about to my expectations, being a pretty solid and tasty meal that was enjoyable but didn’t blow me away. The food came out relatively quickly, within about 10 minutes, which was another plus.

I personally think the best offering that Yamachan has is its large selection of bubble teas on its menu. Yamachan is one of the only places where one can buy bubble tea in Williamsburg. With many different kinds of teas with different combinations of bobas, customers can enjoy a great deal of choice when choosing the bubble tea that looks the best to them. A large bubble tea went for about five dollars with a smaller tea being around three dollars, and I was pleased with the quality and quantity of the tea for the price range.

With just the ramen, my meal came to about $10, and $15 with the bubble tea. All in all, I think Yamachan is a great choice for anyone that has a car and wants to enjoy a unique sit-down meal. Yamachan is a great addition to the growing number of new restaurants in Williamsburg.

Walking into Yamachan, I was greeted by a brightly lit, casual ambiance. The design of the restaurant is modern, very different from the other Japanese restaurant in town, the currently closed Oishii. It is approximately a 10 minute drive from campus down Richmond Road.

I ordered a house milk bubble tea and ramen with a tonkotsu base and pork chasu, all for a total of $15.  After waiting for 10 to 15 minutes, I was expecting a scrumptious dinner. The result I got was good, but slightly below my expectations.

First, the ramen: the pork was tender enough that it fell apart as I ate it, and the tonkotsu base complemented it well, adding salty and savory flavors to the meal. Unfortunately, the ramen noodles themselves were disappointing, with many of them clumping together into one noodle brick. I still enjoyed the meal, but it would have been better if the noodles had been properly prepared.

Second, the tea: I had never had bubble tea before, and I liked it. The tea itself just tastes like a normal black tea, but there are chewy boba beans at the bottom of the cup. The tea is served with a large straw, allowing the boba beans to go up the straw with the tea when you drink it.

Given Yamachan’s casual atmosphere, the ramen they served was slightly below the level I expected it to be. For approximately $15, I could also have gotten a meal at Sal’s or  Blue Talon, among others. Yamachan gets credit for its unique food offerings. However, if you just want a good meal for $15 to $20 dollars, there are higher-quality, more convenient options to choose from near campus.

Yamachan has potential as a ramen hotspot if it can resolve issues with its ramen noodles. In all three of our dishes, the noodles suffered from clumping. I found a well-sized clump in my soup, where undercooked noodles were joined together and could not be separated with any kind of utensil. Since I came for ramen and ramen only, finding noodles in a wad was disappointing.

That issue aside, the stray noodles I did find had a nice bite to them and were buttery. I ordered the shoyu broth with pork chasu. All ramen broths I have had at other restaurants were rather salty, but this one was fairly light on the salt, which I suppose isn’t a bad thing. I do think the flavor though of the actual broth was underwhelming, and this was perhaps revealed by its color, which was a little on the watery, light brown side instead of a deep, rich tone you might find in better soy-based broths.

The pork in my bowl was tender, flavorful and meshed well with the broth. All bowls come with an egg, and you can add extra, if you want. My egg was completely hard-boiled rather than soft-boiled, so I didn’t get that jelly-like, yolky texture I had seen other diners get here in the past.

The vegetable components of the dish — edamame, corn and bean sprouts — were a little underwhelming. While the bright-green edamame were the best addition, I did not realize I had bean sprouts in my ramen until after I removed the ramen clump. These bean sprouts were sad looking — not bright white, not crispy and rather limp, and after eating a few I avoided eating more (which is a shame because I love them).

Yamachan is new and its staff is likely still working out some kinks, so I’ll probably visit it again and give it another chance after some time has passed.