Junior forward Justin Pierce announced Thursday that he will be graduating this May, a year early, contemplating to spend his final year of National Collegiate Athletic Association eligibility elsewhere. This news follows the abrupt firing of head coach Tony Shaver after sixteen seasons with the Tribe.

Pierce began his career with the College in 2016 and has twice been named to the all-conference team for the Colonial Athletic Association. He led the Tribe this season as team captain, averaging 15 points and 8.6 rebounds per game and shooting just above 46 percent from the field.

It is unclear at this time whether Pierce’s decision to transfer was a result of Shaver’s firing or not; however, Pierce thanked Shaver warmly in a statement posted to Instagram.

“Coach Shaver, thank you for the opportunity of a lifetime to put on the Tribe uniform, lead as team captain, and play in front of the most loyal fan base around,” Pierce wrote.

However, in addition to thanking Shaver and his teammates, Pierce made it clear that he is looking at other options for his final season.

“I will begin exploring opportunities for my last collegiate season as a graduate student,” Pierce wrote. “William and Mary will always be home and I will be a proud alum.”

Pierce clarified a day later that returning to the Tribe is a possibility.

“I am exploring the grad transfer market AND W&M is still an option,” Pierce wrote on his Twitter account. “I will meet with the new coach once he is hired and make the most informed/best decision for my future.”

Jeff Borzello, college basketball insider for ESPN, reported that Pierce has been contacted by schools including Wisconsin, Arizona, Gonzaga, and Michigan who are looking to add him to their rosters. Pierce’s preferences remain unclear. 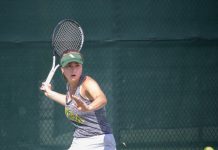