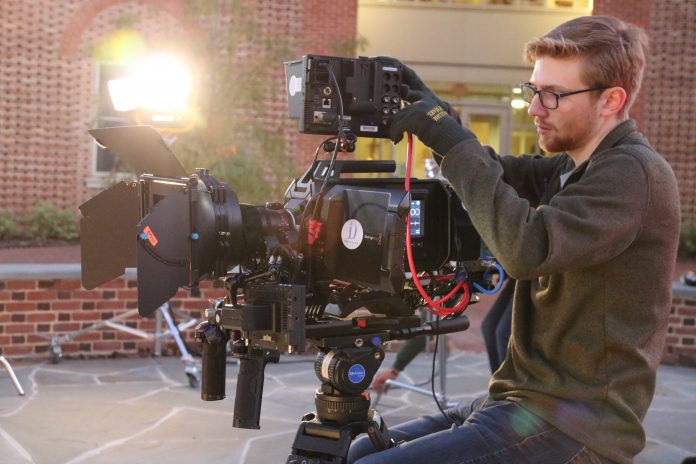 Commonwealth Auditorium was packed full of students and community members Sunday, March 24 for the debut of “Solo Orange,” a short film about what it’s like to live with anxiety and depression. The film was produced by Identity Production Studios, a student-led production company founded by Isaac Davis ’20. Inspiration for the film came from Davis’ friend John Van Bergen, a filmmaking student at Virginia Commonwealth University who passed away in 2018.

The film was based on a true story, focusing on Van Bergen’s struggles with mental illness. Much of the film centered around the internal monologue of a young man suffering from anxiety and depression, interspersed with scenes of his experiences with friends. Dramatic visuals paired with voice-over audio created a highly emotional experience for the audience. At the end of the film, many in the audience were in tears.

“We have been changed by making this film,” Davis said. “We understand that everyone will leave with their own opinions, with their own takeaways. ‘Solo Orange’ is an experience. We want you to feel, we want you to see what it is like for some people to experience anxiety and depression.”

Davis founded Identity Production Studios in 2011, and has since made it into a small business, largely financed by donations. The production company has produced several short films before, but ‘Solo Orange’ stands out as the most personal.

“We’ve done a lot of work everywhere, but we really wanted to come back and focus on something that was really close to heart.” Taj Zacharias, CFO of Identity Production Studios, said.

For Identity Production Studios, ‘Solo Orange’ is its most ambitious project yet, produced over the course of four months and shot in 4K resolution, comparable to the video quality of a professional movie. The production studio had many sponsors, including local businesses in Williamsburg and the McLeod Tyler Wellness Center, who helped the production studio get equipment to shoot and edit high-resolution footage.

After the main film, the audience watched behind-the-scenes footage of the production process. The video showed students spending long hours behind and in front of the camera, working smoke machines, reciting lines and editing footage. The cast and crew, largely made up of students from the College of William and Mary, worked tirelessly to produce the film.

“The people that I worked with were incredible,” Karissa McDonald ’18, who plays Olivia in ‘Solo Orange,’ said. “The other actors were phenomenally talented, and the crew was incredible.”

McDonald, along with a few other actors in the film, did not have much previous experience with acting or filmmaking.

“I have very little acting experience,” McDonald said. “I was in one short film when I was 13. I acted in middle school theater productions, and I was in acting class last semester, but that’s it. I’m very unseasoned. I actually got myself into deep water here, because I met Isaac and he mentioned that he was a director and he was working on a project. I ended up auditioning for it, and I got into it, and then I showed up the first day of production, and it was a professional production set. We spent six to eight hours every shoot – it was a lot, it was intense. We had to go back and re-shoot things at times. It was definitely a lot of work, but I’m glad I did it.”

The characters in the film were based off of real people who were deeply influential in the life of Van Bergen. For the actors, this created an interesting and emotional dynamic.

“Olivia is actually based on a real person,” McDonald said. “She was John’s best friend. We talked on the phone a bit, and then we hung out on set one day, so I got to know her a bit. But a lot was predetermined when they wrote the script.”

The themes of the film were complex, diving into the consequences of mental illness and how someone can feel alone and isolated even when they have deep relationships with those around them. The audio varied between voice-over monologue of the protagonist’s inner turmoil and conversations between friends, while the visuals painted a stark and dramatic portrait of a young man’s struggle with anxiety and depression. One of the main takeaways of the film was to always reach out to those who may be struggling.

“I hope that [the viewers] take away that this was a real story that affected a lot of people, and just to pay attention, and be more receptive,” McDonald said.