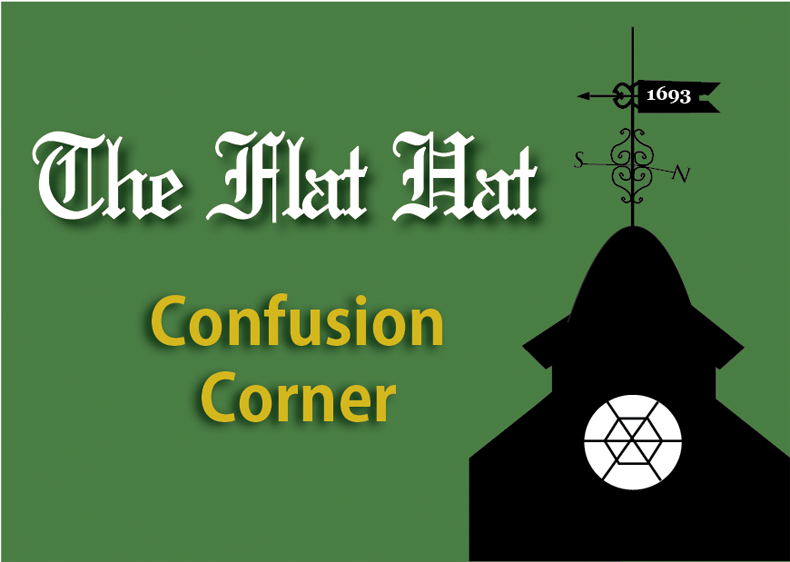 In my time at the College of William and Mary, I have observed a competitive intellectual environment on campus. It makes sense; the College is a so-called ‘Public Ivy’ and is often stereotyped as the kind of school where students would rather stay up doing their assignments than go to a party. In my interactions with peers, I have heard them boast about their GPAs, their extracurricular activities, their research or their internships — the list goes on.

Seeing everyone around successfully manage so many roles made me feel that there was something wrong with me and that I probably did not have the capability of living up to the lofty precedents set by my fellow students. So, I started overloading myself with responsibilities, such as a heavy course load, to prove that I was smart and that I could be just as perfect as everyone around me. Looking back, this was not the right mindset. I wanted to do things flawlessly. The people I looked up to were doing so well and then there was me, who was struggling. It did not occur to me that these people might be dealing with their own issues and have gone through struggles to get to where they are.

Stuck with the mindset that I could never make mistakes, you might be able to guess that I did not cope well with failures. From failing my first college exam to not being prepared for medical school applications on time, I beat myself up badly. I told myself that this should not have happened — that I am not good enough. I thought that maybe I didn’t belong here.

“Stuck with the mindset that I could never make mistakes, you might be able to guess that I did not cope well with failures. From failing my first college exam to not being prepared for medical school applications on time, I beat myself up badly. I told myself that this should not have happened — that I am not good enough. I thought that maybe I didn’t belong here.”

No single event made me suddenly question and change my belief system about the world. Rather, it was an accumulation of events. One such event was a conversation with my mentor, who happens to be a physician, about not doing well in some of my science classes. Instead of telling me that I am not cut out to be a doctor, she gave me meaningful advice and encouraged me to learn from my mistakes and use them to improve. She told me about her own medical school journey and reassured me that there were plenty of people who had once been in my shoes who were doing well now. This person believed in me when I did not believe in myself, and she was not the only one. Many people saw me for who I am. I was the only one blind to this.

Given my past perfectionist tendencies and the competitive culture of our society, students at the College can tend to give more weight to the negative events in life. No matter how insignificant they are relative to positive events, our minds can focus solely on the negativity. Having the mindset that you are never allowed to make mistakes is not realistic. You are living in a fantasy rather than reality. There is no 101 course on how to avoid mistakes and failures permanently. They will happen just by the very nature of being human.

Accept that mistakes and failures are a normal part of human life. If you expect to never make mistakes, you will inevitably let yourself down. However, if you realize that it is okay to make mistakes, you might still be sad, but you will be better equipped to handle the situation. And a mistake or failure does not mean that you’re not good enough. Replace your perfectionist mindset with the “growth mindset”. Having a growth mindset makes you understand that intelligence and ability are developed rather than given from the start. Think about the people in your life that you look up to. I guarantee that they have gone through struggles and challenges to get to where they are. No one has had an easy and smooth journey to their destination. In fact, success is not linear. You will encounter many hardships during your time in college and the real world. It does not mean you are inadequate. Instead, they are opportunities to learn and become more resilient.

Yes, mistakes and failures will not feel good, but to dwell on them for too long can be unhealthy and destructive to your personal growth. Accept them, learn from them and move forward stronger. Instead of beating yourself up on what has already happened in the past, reflect on those experiences, and implement the right changes to your lifestyle. For example, when I barely passed one of my prerequisites for medical school, I was very upset and honestly did not think I was smart enough to be a physician. But other people believed in me and reassured me that everything was okay. I took the steps to reach out to my advisors and ask them what I could do to improve. They all gave great advice and pushed me in the right direction. But one particular piece of advice that I stuck out to me was “Be kind to yourself.” Today, I am doing much better academically. I learned from my mistakes and did not let myself repeat them.

To be successful in life, one must be able to handle hardships. The real world is full of challenges. You will make mistakes and you will fail. But how you choose to let those experiences define you can be a game-changer.

I hope you can take something away from this article and apply it to your time here at the College and wherever your journey takes you thereafter. I leave you with this quote from Bill Gates, a successful person who has had to go through his own hardships:

“Once you embrace unpleasant news not as a negative but as evidence of a need for change, you aren’t defeated by it. You’re learning from it. It is all in how you approach failures.”

Mehar Nasir is a Confusion Columnist who wants you to embrace mistakes and failures, even if it’s difficult as student here in Thrilliamsburg. Email Mehar at mfnasir@email.wm.edu.