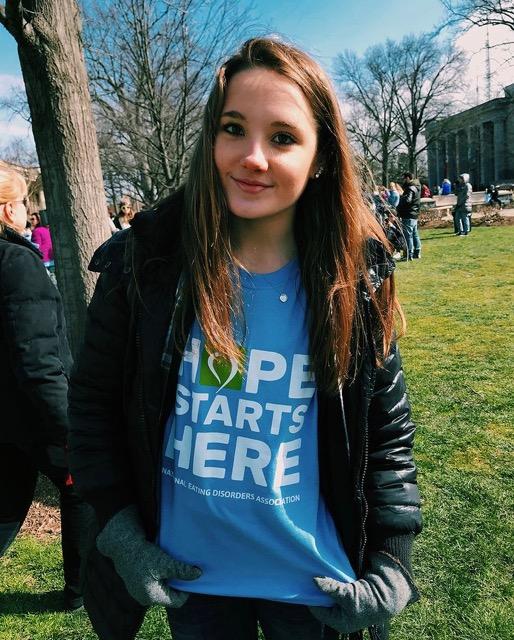 Caroline Rhodes ’21 committed to swim for the College of William and Mary in 2016. That year, while on the pool deck at a swim meet, her coaches approached her with some unsettling and damaging comments.

“My coaches said to me, ‘Caroline, you don’t look so good,” Rhodes said. “You look like you have a beer belly, maybe that’s the reason why you’re swimming so slow.’”

Rhodes thought she was just dieting during the first stages of her eating disorder. Eventually this simple diet devolved into obsessive thoughts about food and her body. When one’s diet is excessively restricted, the body begins eating away at muscle and internal organs.

A doctor’s visit in 2017 revealed Rhodes had an unusually low resting heart rate. At 18 years old, she was already at risk for a heart attack. Her heart had become too weak and her heart rate had dipped too low as a result of the drastic weight loss.  Rhodes first attended treatment in 2017. However, after leaving she was still consumed with thoughts about food and her body.

Rhodes explained that growing up she was always told that being overweight is inherently unhealthy and certain foods, like fats, are bad. In reality, a variety of foods are necessary in your diet. Without eating fats, you cannot process nutrients from fruits and vegetables. Another important point Rhodes addressed was that someone can be healthy at any body weight or size.

“Someone can be labeled as overweight or obese, societally or medically, and their metabolic health, so their blood pressure, their cholesterol, their heart rate, their oxygen levels, all of that stuff, they can actually be very internally healthy,” Rhodes said. “And their weight has nothing to do with how internally healthy they are.”

In the fall of 2017, Rhodes started at the College as a freshman on the swim team. Her eating disorder was improving. But by February of 2018, her disorder had dramatically worsened, due to athletic and academic pressures. She had to stop swimming, leave the College and go back to treatment.

Rhodes said that though she didn’t know how, she wanted to do the work to get better. She has been to treatment three times in total and has been in a strong recovery for the past 18 months. She learned about systemic fatphobia, and how it is ingrained in our education system.

Many high school freshmen take the Body Mass Index (BMI) test. The test misses health problems in millions of people, and labels millions of healthy individuals as overweight or obese. Additionally, a child is much more likely to develop an eating disorder than Type 2 diabetes.

Rhodes is a co-president of the College’s Club Heal, as well as an ambassador for the national organization Project Heal. Project Heal raises awareness about systemic barriers to eating disorder treatment, and Club Heal works to raise eating disorder awareness throughout the College community by promoting body acceptance and body neutrality. Rhodes got involved with this work because learning and educating has helped strengthen her recovery. 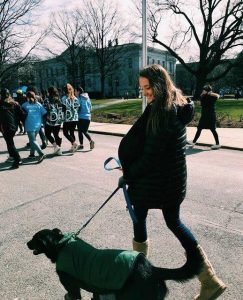 For Project Heal, Rhodes writes blog posts, fundraises and engages in eating disorder activism. They have resources and individuals who help people suffering from eating disorders navigate insurance policies and other health needs. Project Heal works with marginalized groups within the eating disorder community to break down socioeconomic barriers entwined with systemic racism, homophobia, xenophobia and other issues to combat their eating disorders. They raise money and awareness, along with hosting webinars and discussions addressing barriers for students of color, LGBTQIA+ and overweight people with disparities of treatment access.

Club Heal is not directly affiliated with Project Heal, but both organizations help people with eating disorders. Club Heal hosts weekly meetings every Tuesday at 7 p.m. where they tackle a topic related to eating disorders, ranging from awareness to helping those struggling with body acceptance.

National Eating Disorders Awareness Week wrapped up on Feb. 28. NEDAW typically centers events around a particular theme chosen by Project Heal to promote eating disorder awareness, with this year’s theme being “Every Body Has a Seat at the Table.” Rhodes explained that the theme’s particular focus this year was uplifting the voices of marginalized people within the eating disorder community.

Club Heal had a virtual art therapy activity, a speaker discussing her experience as a member of a marginalized group within the eating disorder community, and a panel where students at the College talked and answered questions about their experiences with eating disorders.

On college campuses, comments about body weight and size have become normalized.

“Those comments really hurt,” Rhodes said. “They do more harm than good, and people just aren’t aware of the impact those kinds of statements have on other people.”

Despite the growth Rhodes has achieved, she does not consider herself fully recovered.

“Every single day I choose recovery. I choose to eat,” Rhodes said. “I choose to honor my body and nourish my body. I choose to not submit to those ingrained biases that we have about fat bodies and about fitness.”

“Every single day i choose recovery. i choose to eat. i choose to honor my body and nourish my body. i choose to not submit to those ingrained biases that we have about fat bodies and about fitness.”

She still sometimes has a nagging voice in the back of her head, that she likes to call her “eating disorder voice,” telling her she’s going to gain weight.

“What keeps me in a strong recovery, I would say, is that I have worked on and strengthened my ability to talk back to that voice and say ‘No, you’re wrong,” Rhodes said. “I have to tell myself that’s not true, and you’re not doing that, because your eating disorder almost cost you your life.”

Rhodes intends to use her psychology major to become a clinical eating disorder therapist, working so that people don’t have to suffer like she did with her eating disorder.

“My message to anyone out there who is struggling with an eating disorder: You are not alone,” Rhodes said “This is a battle. It’s very underrated how difficult eating disorder recovery is. So you are not alone. You are beautiful, just the way you are. You are and always have been enough. And your body is the least important thing about you. … We all are enough just the way we are.”