Home Data Yes, it really does rain that much: Williamsburg confirmed as rainiest Virginia... 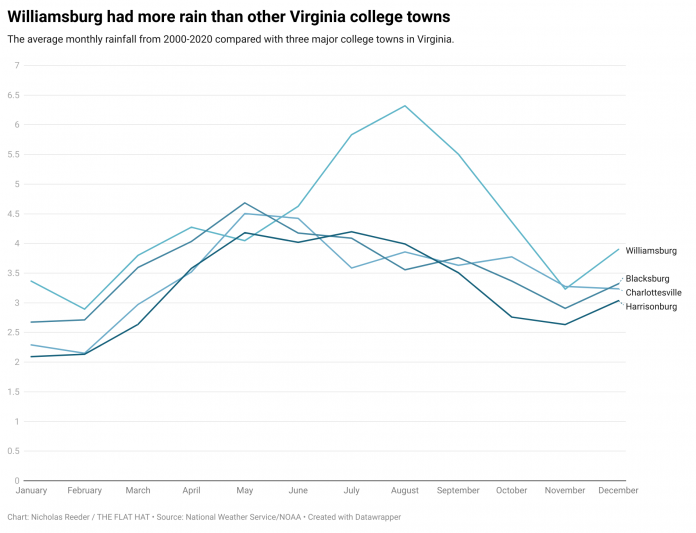 Despite the picturesque buildings and charming colonial location, students at the College of William and Mary often find themselves hesitant to leave the confines of their housing due to what can seem like never–ending rain. Since students returned to the College for the spring semester, it seems to have taken a distinct turn with the number of pleasant days being almost none.

According to Director of Facilities Gregg Shipp, this season seems particularly rainy.

“It seems the rainfall for this year has been well above average,” Shipp said.

“It seems the rainfall for this year has been well above average,” Shipp said.

The Flat Hat has examined data from multiple weather services to investigate just how much it rains in Williamsburg and how those tasked with maintaining the College feel about the weather. According to data from the National Weather Service and the National Oceanic and Atmospheric Administration, Williamsburg was the rainiest of the major college towns in Virginia on average from the years 2000 to 2020. Williamsburg’s rainiest months on average over this period were August, July and September.

Williamsburg rain has always been something facilities management has had to contend with. “Buildings do age and develop leaks,” Shipp said., “Facilities staff keep a close watch on facilities during rain events to identify leaks for repair and protect university property.”

This is not to say that consistent rain has not caused issues, as Shipp confirms.

“It has been a challenge for ongoing construction projects but our contractors have taken appropriate precautions and made adjustments in work sequencing in order to remain on schedule,” Shipp said.

Students attempt to escape the rain in a variety of ways. For Grant Wong ’21, that involved moving 3,000 miles away as a member of the St. Andrews Joint Degree Programme. Somehow, his gamble paid off, as shockingly Williamsburg gets more rain on average than Scotland, one of the most famously rainy places in the world.

“I’d say here, [activities are interrupted more] as it rains harder,” said Wong. “At St. Andrews, there’s a bunch of sports that practice indoors, so I’d guess those aren’t interrupted as much as those at William and Mary.”

“I’d say here, [activities are interrupted more] as it rains harder,” said Wong. “At St. Andrews, there’s a bunch of sports that practice indoors, so I’d guess those aren’t interrupted as much as those at William and Mary.”

Though the rain makes some activities difficult, takes its toll on buildings and sometimes creates issues for facilities management, those at the College persevere and the rain is just part of the experience. After all, to quote Dolly Parton, “If you want the rainbow, you gotta put up with the rain.”