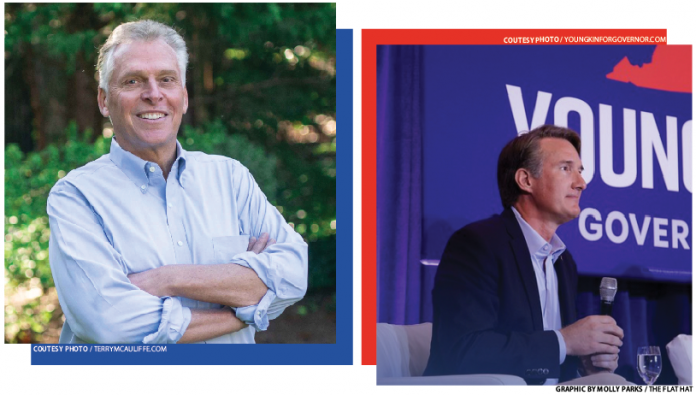 With Virginia’s gubernatorial elections under two weeks away, the College of William and Mary’s campus has once again been abuzz with efforts to mobilize the voters, both among the student body and within Williamsburg.

Democratic candidate Terry McAuliffe, who was previously governor from 2013 to 2017, has a platform built around continuing the policies of current governor, Democrat Ralph Northam, reenergizing the Virginia economy and using the policy achievements of his first term as proof he knows how to govern. McAuliffe is also emphasizing a firmly pro-choice stance on abortions.

Abortions were a major part of McAuliffe’s 2013 win. With the passage of Texas’s highly controversial SB8 abortion regulations bill, McAuliffe’s campaign hopes to use his opposition to the bill to generate voter support.

Republican candidate Glenn Youngkin, meanwhile, has been formally endorsed by former president Donald Trump. His platform focuses on revitalizing the Virginia economy by cutting the grocery sales and gas taxes, as well as improving the public education system. Youngkin has come under criticism for having a vaguely defined and hard-to-find platform and policy goals.

Though participation in off-year elections is generally lower than in general elections, such as 2020, campus groups hope that participation among the College’s students will remain high for this race.

Though the committee has only been in existence for two months, it has already started voter-engagement projects with the student body and Williamsburg community. Thompson stated that the committee works with faculty and staff, as well as running outreach with the Williamsburg and James City registrars and via social media. Recently, the committee has sponsored initiatives to register students to vote.

“We actually had the Williamsburg registrar here, and we set up on the terrace, and we offered free pizza as part of that, and we got about 30 new students to register who previously hadn’t before,” Thompson said.

“It’s important to remember that all 100 seats in the House of Delegates are also up for re-election,” Young Democrats member Mia Tilman ’24 said. “We’re just a smaller group, and a lot of our efforts have been tied into making sure he gets re-elected.”

Tilman also says that most efforts have been through phone banking and online canvassing events.

“Students can participate in voter outreach efforts from the comfort of wherever they choose, their own room and whatnot,” Tilman said.

Since the College’s students lean Democratic, Tilman said, efforts towards the student body have been less about who to vote for and more about just voting at all. Still, Tilman says that the most important problem is apathy coming from voters thinking that Virginia will always vote blue.

“The thing we’re trying to emphasize is to remove the perception that Virginia is a solidly blue state, because it’s not,” Tilman said. “When we had a Democratic trifecta in 2018, it was the first time that had happened in 25 years, and Virginia has only really voted consistently blue since 2019. And because Youngkin has done a really good job of walking that Trump-moderate divide, it’s been a very competitive race.”

“The thing we’re trying to emphasize is to remove the perception that Virginia is a solidly blue state, because it’s not,” Tilman said. “When we had a Democratic trifecta in 2018, it was the first time that had happened in 25 years, and Virginia has only really voted consistently blue since 2019. And because Youngkin has done a really good job of walking that Trump-moderate divide, it’s been a very competitive race.”

A Democratic trifecta refers to control of both houses of state legislature plus the governorship. Chairman of the College Republicans Eugene Lee ’23 is confident Youngkin’s campaign can avoid that reality this election cycle.

“I think this is probably the most optimistic we’ve probably been for a statewide election in Virginia,” Lee said. “I mean, as you know, last time we’ve had a Republican governor or any statewide elected office that a Republican won was with Bob McDonnell. And so obviously, now we see a clear shot of it. The polls are showing that it is becoming an increasingly tight election. I think the recent poll actually showed that it was tied. So there’s not a lot of chances for us to repeat this same result.”

Lee also touched upon hot-button issues, such as the role of parents in education, which relates to the recent debate over critical race theory in schools. Lee also pointed to less government intervention and lower taxes as issues of personal importance to him in the governor’s race.

“Personally, for me, I just want to see less government intervention in our own individual lives, you know, decreasing taxation, especially for someone like me who lives in northern Virginia, where we get taxed the most in comparison to the rest of the state, you know, decreasing the gas tax where we see record high gas prices in the state as well,” Lee said. “And also a lot of education as well. Just recently, we’ve seen Terry McAuliffe say himself that he doesn’t want parents to make decisions regarding their children’s education. I think a lot of it should go back to the local parents who, you know, help decide alongside, in conjunction with the school boards in deciding curriculum like that. So definitely those are some of the high priority issues. I think that is at stake right here in Virginia.”

No matter the outcome, Thompson seems confident that the College’s students will vote in large numbers on Election Day.

“We actually had a poll from SA that over 90% of the student body planned to vote,” Thompson said, citing a 2020 poll, “And I’m cautiously optimistic that we’ll do well again this year.”

Additional reporting for this piece provided by Claire Hogan.