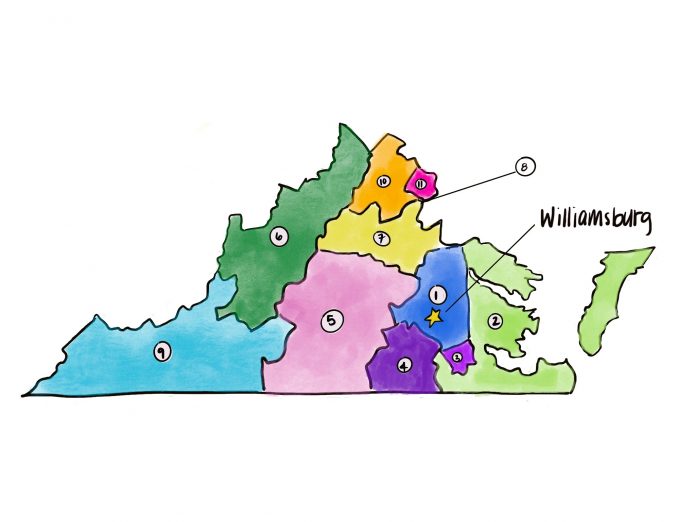 The College of William and Mary will have a new congressional representative this coming January. This midterm election cycle will be the first following the 2020 census, and with an updated electoral map, Williamsburg now falls under the first district in Virginia.

Every 10 years, the U.S. Census Bureau conducts a national census to determine the number of people living in the United States. The Bureau then reports their findings to the President, who then reports the results to Congress. The Clerk, an officer in the House of Representatives, then alerts governors the number of seats their state has been alloted. State legislatures then redraw congressional districts, and apportionments take effect three years after the census.

All 435 seats in the House of Representatives are up for election every two years. However, according to RealClearPolitics (RCP), an organization that creates election forecasts based on aggregate polling data, only 34 seats are toss-ups. Of these 34 seats, 29 are currently held by Democratic incumbents. Additionally, RCP considers 148 seats safely in Democrats’ control, and 179 seats safe in Republicans’ control.

According to Princeton Professor Samuel Wang, who manages the Princeton Gerrymandering Project, there is actually an increase in competitive seats compared to a decade ago. His project, which looks at all recent elections instead of only presidential elections, claims there has been an increase in competitive seats since 2012. Wang also cited the importance of independent commissions and neutral map-drawing processes to ensure better congressional maps in swing states, including Virginia.

However, in Virginia, the commonwealth’s Supreme Court chose new district lines after the bipartisan redistricting commission failed to agree on a new map. The court appointed special masters to redraw the map, before approving the update last December.

According to James George ’24, president of the College chapter of College Republicans, the redistricting process has an overall positive effect for the Republican party.

“While Virginia did not gain or lose any seats this cycle, the way the districts were redrawn have given Republicans the opportunity to pick up a couple of seats in the Commonwealth from the Democrats, particularly the 2nd and 7th districts,” George said.

Rep. Elaine Luria (D) represents VA-02. She won the seat in 2018 by less than two and a half points over incumbent Scott Taylor (R). In 2020, Rep. Luria again defeated Taylor, this time, by nearly six points.

However, with the start of the 118th Congress on January 3, 2023, the College and the City of Williamsburg will become part of the first district (VA-01). Rep. Robert Wittman (R), who has represented VA-01 since 2007, will likely be the new congressman for the Williamsburg area. According to FiveThrityEight’s election forecast, Wittman is very likely to win re-election this fall.

Despite the change in district, political organizations on campus are still focusing their attention in VA-02. As of Friday, Aug. 26, FiveThirtyEight forecasts Jen Kiggans (R), a Virginia State Senator and challenger to Rep. Luria for VA-02, as slightly favored to win the district.

According to George, the College Republicans will likely focus their efforts on the election for VA-02.

“We have been considering having the club still work in the second district because it is more competitive, and we need all hands on deck,” George said.

The outcome of the VA-02 race will have national implications, as Republicans have high hopes of regaining a majority in the House.

“If Republicans take back the House, I think President Biden’s agenda will be very hard to pass, since voting is often along party lines,” George said. “…We are concerned with what President Biden has been doing with executive orders, and we believe the House can provide some checks and balances on him.”

“As of right now, we are planning to gear our campaign efforts towards Luria’s race, since the district looks like it will be one of the most competitive races in the country,” he added. “This race gives a unique opportunity to college students in a political atmosphere filled with many uncompetitive races to make a significant difference with just an hour of their time.”

Hoffman explained he is open to working with other candidates, too.

“My personal impulse is that Luria’s campaign is where help is needed most,” he said. “But, we are a membership-geared club, so if people have a strong interest and strong preference to work with Herb Jones, the Democratic candidate in VA-01, we are more than happy to work there, too.”

According to FiveThrityEight, Republicans are favored to win the House. Their model currently forecasts that Republicans will hold 230 seats, overcoming the required 218 for a majority.

Primary elections for the 117th Congress are already well underway, and redistricting has had a significant effect on many races. According to Sabato’s Crystal Ball, an organization at the University of Virginia Center for Politics, there are more new safe Republican districts added than new safe Democratic districts.

According to Max Berckmueller ’24, the vice president of Young Independents at the College, the club will discuss the effects of redistricting this semester.

“We have discussions every week with members of the club about different issues, and redistricting will definitely be one of them,” Berckmueller said. “But, we are more of a club of observation and discussion.”

Berckmueller believes redistricting will have a negative effect on American politics.

Hoffman is very concerned about the 2020 redistricting cycle.

“If races become entirely predictable and uncompetitive between two political parties, you will not see the benefits of democracy from its original conception,” Hoffman said.

Despite entering a less competitive district, Hoffman pointed out the importance of students voting in the general election this November.

“There are many other important races on the local ballot that are important for our school,” Hoffman said.