One of the most anticipated events in the days leading up to the start of classes is the fall Student Organizations and Activities Fair. Here, students peruse the aisles of Kaplan Arena in search of a social club or extracurricular activity that best suits their specific interests. With more than 450 clubs and organizations on campus, it’s difficult to fathom one club standing out above the rest.

However, one group, in particular, saw droves of students flocking to their table: Nerf Club.

The name itself conjures an air of nostalgia for Gen Z’ers who grew up hearing the familiar phrase “It’s Nerf or nothing” bellowing from the television.

But what is Nerf Club? And what’s the reasoning for the reinvigorated enthusiasm for a once-fringe organization?

“Nerf Club is a place where you go every Saturday to just de-stress, relax and do it in probably the most fun way possible, which is shooting Nerf blasters at your friends,” Club President Nathan Mo ’24 said. “It was started as an alternative space for people that wanted to be social but didn’t enjoy drinking or the party atmosphere.”

Nerf Club began operating unofficially in 1999 as a late-night activity for the College of William and Mary’s Science Fiction and Fantasy Club.

“For the first four or five years, it was operating underground,” Mo said. “It was just a bunch of friends in an academic building, shooting each other with Nerf blasters. The story goes that Campus P.D. one day walked in on them doing that, and they’re like, ‘you guys have to go legal.’ So they registered with Student Leadership Development, and it took off from there.”

For nearly two decades after its founding, Nerf Club mainly operated through word of mouth. As a result, the club fostered a tight knight community of Nerf enthusiasts. However, Mo explained that the word-of-mouth structure limited broader engagement for the club. The group’s closeness also meant that few rules or game descriptions were codified in writing.

In 2020, the COVID-19 pandemic nearly rendered Nerf Club obsolete. Meeting locations were restricted to Unity Hall, participants were capped at ten and members were required to RSVP beforehand.

It wasn’t until fall 2021 that the club found its stride. The gradual recovery from the pandemic ushered in a new wave of students enthusiastic about building back clubs that had suffered in the year prior.

The Nerf Club’s social media presence was one of the major contributing factors to its recent success. The club’s Instagram, run by Social Chair Shaia McClung ’25, leans hard into the “meme-ability” of Nerf at the College.

“I was like, I need to run the Instagram just because I knew what it could become,” McClung said. “It’s just so much fun. I love meme-ing it.”

As social chair, McClung is also responsible for organizing events with other campus groups like WCWM 90.9. In the past, the club has also collaborated with organizations like HEMA and Archery Club.

For instance, the club introduced the new position of lieutenant, who oversees game design and safety procedures. Though the position is currently headed by Somerville Munt ’25, the role initially belonged to Jeff Bailey ’24, who has now been promoted to vice president.

“A really big part that drew me to the club was the game design element of it and moderating and running the games behind the scenes,” Bailey said. “That’s why we need so many executives because there’s a lot that goes into it in real-time, like keeping the game running smoothly and making sure everyone knows what’s up.”

With the responsibility of managing 50 to 100 attendees weekly, the challenge of the lieutenant is to select and organize games that adapt to each building and group size.

“You have to keep a lot of things in mind because not every game works for different buildings. Some buildings have multiple floors and are asymmetrical on different sides, some aren’t,” Bailey said. “Also, you have to keep in mind how they work for the amount of people. At the start of meetings, we’ll have like 50 to 100 depending on the semester, and then towards the end, we’ll get down to between ten and 20 people that stick around ’til midnight. We have different games for front runners versus more chiller small people games towards the end.”

As explained by Bailey, Nerf Club gatherings require months of preparation and thoughtful organization from executive members to give club members the best experience possible. With over 28 games to choose from, exec members conduct walkthroughs of academic buildings to determine which games best fit the space. Prior to the start of each semester, the club also submits space request forms which are then placed on a rotational schedule, ensuring that no one meeting will be the same.

“A really big part that drew me to the club was the game design element of it and moderating and running the games behind the scenes,” Bailey said. “That’s why we need so many executives because there’s a lot that goes into it in real-time, like keeping the game running smoothly and making sure everyone knows what’s up.”

With the amount of detail and attention put into organizing meetings, It suffices to say that those part of the Nerf Club care deeply about the game. So, what do the meetings actually look like?

The club attracts attendees with a vast array of skill levels, ranging from novice Nerfers looking for a late-night activity to club regulars who come equipped with their own gear. However, those who don’t personally own a blaster need not worry. At the start of each meeting, attendees are encouraged to sort through dozens of blasters to find the one that suits them best. Tubs filled to the brim with Nerf darts are also supplied. Those with an advanced skill level equip themselves with customized blasters, magazines to hold extra darts, holsters and even Nerf crossbows for a more accurate shot.

Meetings traditionally begin at 8:00 pm but are notorious for running late into the night.

“Ahead of time, we discuss and make a schedule of five to 10 games that we’ve picked out ahead of time,” Bailey said. “Each one is about 10 minutes on a good day, plus 10 minutes break in between. So over four or so hours, we’ll get through around ten games.”

Most games are placed into four categories: team, squad, individual and secret.

“Each of those has slightly different win conditions and objectives that you need to go towards,” Mo explained. “Creative titles like TTT, Biohazard, Dawn of the Dead and Go Off, I guess invite attendees to stay and see what each game has in store. “

By the end of a meeting — usually around 1:00 am — every vestibule in the building is littered with darts. To remain courteous to other users of the space, executive members conduct a thorough sweep of each floor. Mo and Bailey have the dart collection process down to a science. Now, the tedious process rarely takes longer than an hour.

“We’re usually in and out like a ghost.” Mo said.

Though the Nerf Club may run a well-oiled machine with standard routines, the club doesn’t fear change and plans to introduce a variety of exciting new events this upcoming semester.  Aside from weekly meetings, the club is preparing for a special event called Gauntlet that will take place on Nov. 12 in Small Hall. Though the details are not yet set in stone, the club currently plans for the Gauntlet to be a campaign-style event modeled after a single-player story mode in a video game.

“The Gauntlet is just like a more hyped up, more advertised and cohesive meeting where all the games flow into each other, and there’s like a loose story around it,” Bailey said.

“This year, we’re partnering up with the libraries to have one to two special guests,” Mo said.

For those interested in attending Nerf Club for the first time, McClung offers thoughtful advice.

“One thing that I would say is that you have to come in pretty prepared to laugh at yourself. Be ready to feel like you’re in a video game and fully just live that out. You have to be in the Nerf mindset,” McClung said. “It can be a little intimidating, but you just have to jump right in, and they will absolutely welcome you with open arms.” 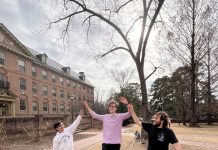