Wednesday, Jan. 25, The Williamsburg Police Department issued a press release regarding a shooting that occurred on the 700 Block of Scotland Street at approximately 12:47 a.m. A TribeAlert email detailing the incident was sent to students of the College of William and Mary at 12:20 p.m. No members of the College community were involved with the incident.

The shooter was detained immediately and taken into custody and has been identified as Michael Trenton Rusk, a 24-year-old male from James City County. There is no ongoing threat to the Williamsburg community.

“Mr. Rusk was transported to the Virginia Peninsula Regional Jail (VPRJ) and charged with malicious wounding, use of a firearm in the commission of a felony, and discharging a firearm within City limits,” the Williamsburg Police Department said in the press release.

Rusk is a police officer in the James City County Police Department. However, he was not on duty during the time of the incident. The investigation is currently ongoing and is being led by the Williamsburg Police Department.

“Though this incident occurred off campus, it was nearby. We recognize any incident like this, whether near or far away, can increase safety concerns. As you can see in the City’s release, the suspect in last night’s incident was immediately apprehended, and there was no imminent or on-going threat to our campus community,” Chief of Police Deborah Cheesebro wrote in an email to the College. 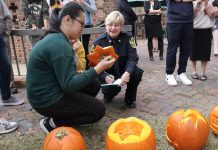