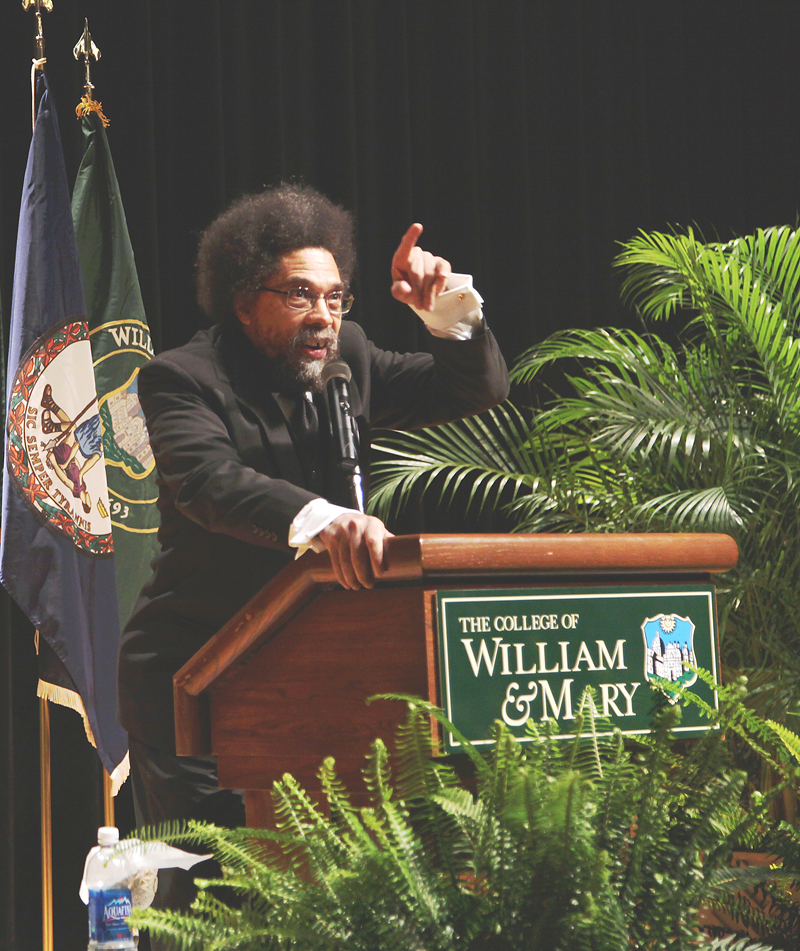 Speaking in metaphors of death and rebirth, noted scholar and activist Cornel West addressed a large audience at the College of William and Mary’s annual Martin Luther King, Jr. commemoration ceremony Thursday and considered the implications King’s legacy has for contemporary society.

“Any form of hatred that loses sight of the humanity of other people needs to die if the best of who we are is to live,” West said.

The Class of 1943 University Professor in the Center for African American Studies at Princeton University, West has also taught at Harvard and Yale universities, the University of Paris and Union Theological Seminary in New York. His speech followed a vigil and candlelight march led by Ebony Expressions Gospel Choir.

“I cannot think of a person who better exemplifies the faith, hope, justice and love that Martin Luther King stood for,” she said.

After thanking Foxworth and the College administrators in attendance, including “captain of the ship” College President Taylor Reveley, West opened his speech with an invocation to King that elicited an “amen” from the audience.

“Brother Martin, we love you,” he said. “We miss you. We shall never ever forget you.”

West emphasized King’s lifelong intellectual and spiritual wrestling with the idea of the purposes of being.

“Martin Luther King, Jr. was part of a grand humanist tradition,” West said. “He always kept the focus on this question of what it means to be human. It ought to unsettle us, it ought to unnerve us. What kind of human do we want to be between our mother’s womb and the tomb? What kind of excellences will we embody?”

King’s concern with these existential questions suggests that he possessed more complexity than many people realize, West posited.

“Now that we celebrate him every January, it’s so easy for him to be sanitized and sterilized and deodorized,” West said. “We are never ever talking about some isolated icon sitting on some edifice in some sterile museum.”

West asserted that King’s message is universal one essential to the success of a multiracial democracy.

“He comes from a whole battalion of peoples – disproportionally chocolate but some white ones too,” West said.

In the months before his assassination, King had broadened the scope of his efforts and was speaking out against poverty and the Vietnam War. West alluded to these campaigns and spoke in support of the Occupy movement, as part of which he was arrested outside of the Supreme Court in October.

“You can love the 1 percent and hate injustice,” West said. “How is democracy staying alive given that kind of inequality?”

West’s interpretation of King’s ideas struck a chord with many in attendance, especially those who participated in the question and answer period. Maggie Russello ’12, speaking as a member of the College’s Living Wage Campaign, tearfully asked West what King would have thought of the group’s efforts to increase campus custodial workers’ pay rates.

“You’re not going to get at the truth unless you let the suffering speak,” West replied. “You keep bringing pressure to bear. You always want to do it with a certain sense of civility.”

“It answered what you’re supposed to do next, how you’re supposed to take the lessons Dr. King taught us to apply them to your daily life and make yourself a more positive and productive citizen in society,” she said. “I felt very enlightened today and, more importantly, challenged.  I am excited to see what I can do personally and what my peers can do.”