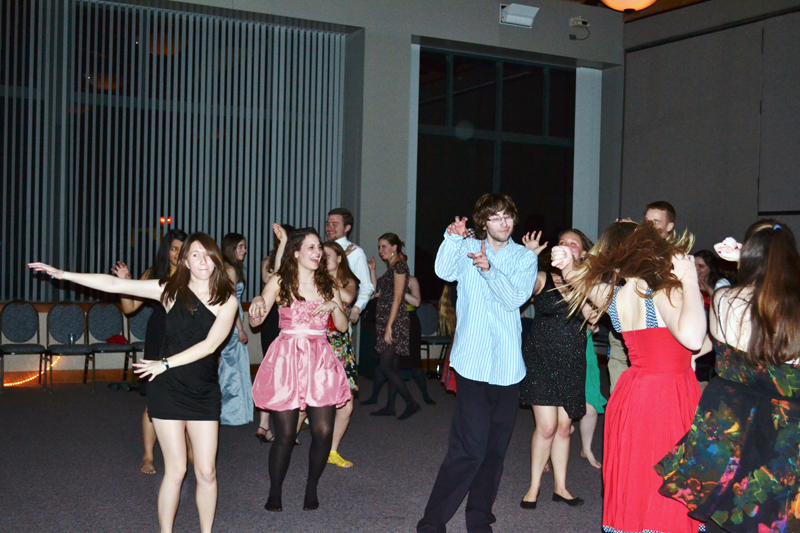 When Harry Potter went to the Yule Ball, the Great Hall’s magical ceiling was covered in stars.

At the College of William and Mary’s Yule Ball, the Williamsburg night sky was projected onto a wall.

The lack of real stars on the ceiling, however, did not deter students from enjoying the evening. Nor did the fact that the dance took place on a Wednesday night. For them, it replaced an ordinary meeting of the Wizards and Muggles club, substituting discussions of J.K. Rowling’s novels for dancing and, for some, acting as an excuse to wear old homecoming dresses.

“We don’t actually have a dance, so we wanted to do something special,” Jessica Wang ’12, historian and member of Hufflepuff House, said. “A Yule Ball in February seemed to work.”

The event was held Feb. 15 in Tidewater B in the Sadler Center, and the proceeds made by the one-dollar entrance fee will go to an as-yet-to-be-determined children’s literacy program. This was the first time Wizards and Muggles held the event, but they hope it will not be the last.

Like the club, the ball may not have been what outsiders would expect from a Harry Potter dance.

Apart from the projection of stars in the middle of the room, little suggested that it was hosted by a group of people brought together by a love of the fantasy series. Like the club itself, the event turned into a gathering of friends.

“Harry Potter’s always been part of my life,” Sam Meadows ’12, treasurer and member of Gryffindor House said. “And this club is a great way to escape. I get to hang around people who feel the same way that I do. We have the same mind.”

Since 2008, Wizards and Muggles has grown from 12 to around 40 members. The club has grown due to advertising and the different activities they undertake, but the Quidditch team has garnered the most attention for the club.

Many members of the Quidditch team are also part of Wizards and Muggles, like Meadows, who plays keeper for the College, but there are some who are only interested in the sport played on broomsticks, rather than the book series from which it comes.

“Some people join because they aren’t interested in conventional sports, and it’s not the type of game you usually get to play,” Meadows said. “But they’re not as interested in discussing the books.”

Of course, the Wizards and Muggles club spends a great deal of time discussing the books, even if not directly. They play games like “Pin the Tail on Dobby” and have “Spell-Offs,” spelling bees that are focused on the names of spells used in the books.

Book discussions usually come into play during these games. Recently, the club sorted characters from other fandoms into Hogwarts houses and decided which houses.

“We had a problem where the protagonist would end up in Gryffindor and the antagonist would be in Slytherin,” Tyler Overfelt ’13, president — or headmaster — and member of Hufflepuff House, said. “We had a big discussion about whether or not we were putting them there because the heroes in the books were in Gryffindor.”

The different houses in Harry Potter are a large part of the club. All new members must fill out a questionnaire, answering questions like, “Write a six word memoir”, and “What would you see in the Mirror of Erised?”

“We always ask what house they don’t want to be in,” Overfelt said. “And no matter whether or not we think they should be in there, we don’t put them in [that house].”

This practice allows some of the prejudices attached to the different houses in the books to be applied to the Wizards and Muggles houses, as well, since, according to Overfelt, most people ask not to be put in Slytherin, which is also the club’s smallest house.

“But I like to think of the houses as being morally neutral,” he said. “In the books, Slytherin tends to attract bad people, but that doesn’t make it a bad house.”

Few of the rivalries present in the books are reflected in the club. Many members use it as a way to escape everyday stress.

“Most people [at the College] like to take things very seriously, even if it’s supposed to be fun,” Overfelt said. “And people [in the club] don’t seem to do that so much. They take it seriously, but if something goes wrong they don’t stay up all night and worry. It’s a very low-key thing. It’s about having fun and enjoying something that should be enjoyed.”

And many members enjoy being around like-minded individuals.

“You can make a reference to Felix Felicis and other people will know what you mean,” Wang said. “It’s a place where you can feel like you can be yourself.”

It was with that feeling of like-mindedness that the Yule Ball became an event during which members could enjoy the company of those like themselves, while partaking in some lighthearted fun.

Or, as Professor McGonagall called it, “well-mannered frivolity.”