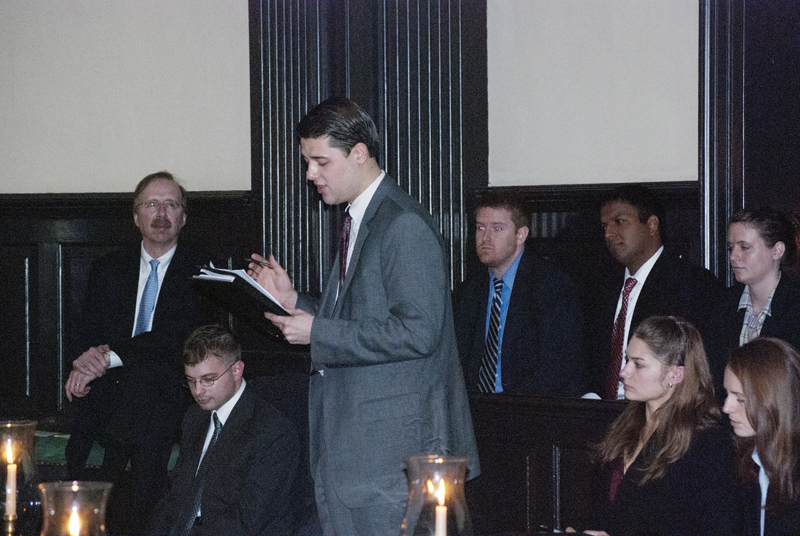 Bells rang across Duke of Gloucester Street Thursday — not from the Sir Christopher Wren Building, but from the former state capitol. Inside, Marshall-Wythe School of Law students sat together as burgesses did centuries ago. By candlelight, they conducted a mock debate in the style of Thomas Jefferson 1762, Henry Clay and other early American leaders.

The mock legislature, organized by the George Wythe Society of Citizen Lawyers, was presided over by Virginia senator Tommy Norment, R-3. Law students debated two proposed bills in the style of a parliamentary debate, beginning with wisdom from Thomas Jefferson.

“In matters of fashion swim with the current. But in matters of principle, stand firm like a rock,” Jefferson said.

The students then began to debate the legal definition of marriage, confronting issues of LGBT civil rights. They were assigned districts in the mock legislature and their political parties were likewise not of their choosing.

Many students argued in favor of revising the commonwealth’s definition of marriage to include any two consenting individuals, regardless of gender.

“If we cannot do what is right for the sake of being right, perhaps we can do it because what is wrong comes at a cost,” David Kaufman J.D. ’14 said.

Other students raised the question of past referendums that indicated a lack of majority public support in Virginia for the right of homosexuals to marry.

“We were not elected to base our legislative decisions on political opinions or ideals. We were elected to represent the people,” Sara Beason J.D. ’14 MPP ’12 said.

Yet other students took a different tact —examining the issue in light of Virginia’s nationally recognized campaign to attract more business.

“The most effective workforce is a diverse workforce. States that cannot recognize gay marriage put their employers at a disadvantage by shrinking the pool of applicants that can be considered. Therefore, according to the laws of supply and demand, you are increasing the cost of workers,” Mike Kaestner J.D. ’14 said.

The bill revising the definition of marriage without concern to gender was passed by a vote of 19 to 12. Debate then turned toward another bill that would counter the Patient Protection and Affordable Care act, colloquially known as “Obamacare.”

“Such a law flies in the face of our concept of democracy and individual freedom. The citizens of Virginia are less free if such a [federal] law is accepted,” Caitlin Cater J.D. ’14 said.

“The market [for health insurance] has, alas, failed the citizens of Virginia,” David Weilnau J.D. ’14 said.

Extended counterarguments stemmed from the proposal by some students that the act was permissible under the Constitution’s Commerce Clause. Many argue that this section, which allows Congress to regulate areas of interstate commerce, is irrelevant because the act goes further than simple regulation.

“Congress is trying to create market; it is not regulating an actual market,” Chelsea Bobo J.D. ’14 said.

The bill explicitly protecting commonwealth citizens from coercive purchase of health care passed by a narrower margin of 17 to 15.